Being meek does not mean being a pushover, pope says at audience 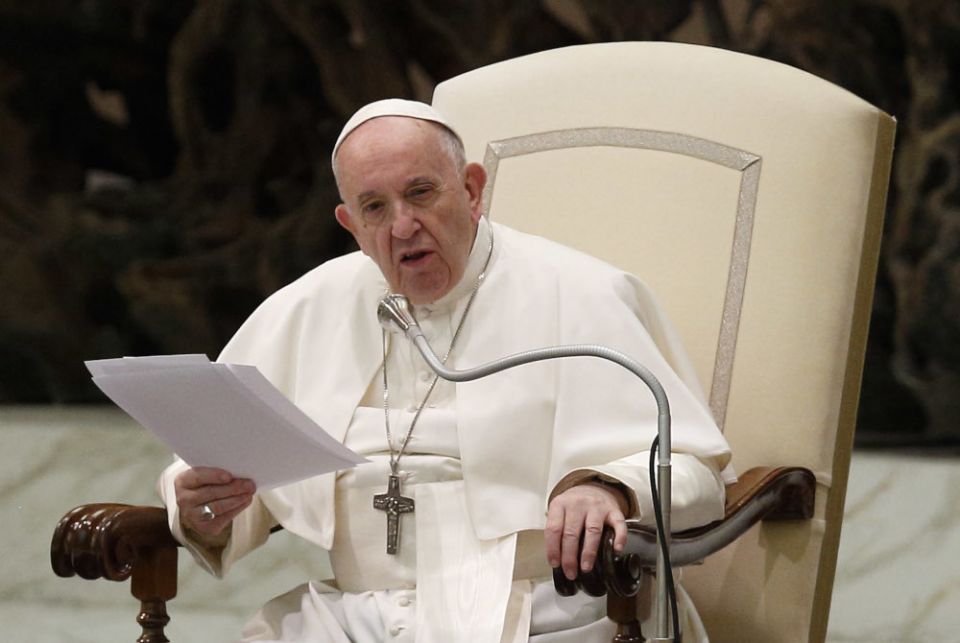 Vatican City — Those who are meek are patient, gentle and merciful, drawing people together and salvaging relationships, Pope Francis said.

Meekness entails tenaciously holding onto one's trust in and relationship with God and protectively guarding his gifts of peace, mercy and fraternity, the pope said Feb. 19 during his weekly general audience in the Paul VI hall.

The pope continued a series of talks on the Eight Beatitudes by reflecting on the third beatitude, "Blessed are the meek, for they will inherit the land."

It seems strange that meekness and inheriting land are somehow related, the pope said.

But, he said, it is rooted in Psalm 37:3-11, which tells believers to trust in the Lord, refrain from anger, be patient and "make your righteousness shine" for then shall they "inherit the earth" and "delight in great prosperity."

The "land" the psalm refers to is something greater than some earthly territory, which is so often a source of conflict, war and aggression, the pope said.

"That land is a promise and a gift for the people of God," he said. It is heaven – that "new earth" that God has made for his children.

"Therefore, the meek are those who 'inherit' the most sublime of territories," Francis said. "They are not cowards, weak, looking for some fallback moral principle in order to steer clear of trouble. Far from it!"

Whether a person is meek is seen during moments of conflict, crisis or pressure, he said, since it's easy to seem meek when life goes smoothly.

"You see it in how they react to a hostile situation," when they are attacked or offended, he said.

Meekness is what Jesus displayed during his passion since, according to St. Peter, Jesus returned no insult, did not threaten and instead, "handed himself over to the one who judges justly."

The meek are those who know and trust in what God has offered and they do not want to lose it, the pope said.

"The meek are not people-pleasers but are Christ's disciples who have learned to defend a whole other land," he said. "They defend their peace, they defend their relationship with God and God's gifts, guarding mercy, fraternity, trust, hope."

To talk about meekness, the pope said, it is important also to talk about the sin of wrath.

"A moment of anger can destroy so many things; you lose control and you don't evaluate what is really important and you can ruin a relationship" with someone, sometimes irreparably, he said.

How many family members, he added, no longer speak with each other or are cold with each other because of anger, which always divides, while meekness, "gathers together."

"Meekness conquers many things. Meekness is able to win over hearts, salvage friendships and much more," he said.

It's natural to get angry, he said, but then people should "calm down, rethink it and get back on track and this is how you can rebuild with meekness."

"There is no earth more beautiful than the heart of another person," he said, "no land more wonderful to win over than that peace" reestablished with another, and this is the land the meek shall inherit.

Vatican | Being meek does not mean being a pushover, pope says at audience