Benedict a pope of seconds in Assisi 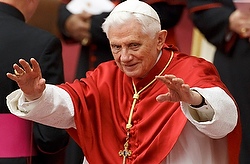 Pope Benedict XVI gestures to the crowd during a prayer service in Paul VI hall at the Vatican Oct. 26. (CNS photo/Paul Haring)

John Paul II was a pope of firsts, from launching World Youth Day to visiting the Rome synagogue, from leading a liturgy of repentance for the failures of Christians to convening a summit of “new movements.” Every time John Paul broke the mold, he added another chapter to the story of his remarkable 26-year papacy.

Today, when Pope Benedict XVI repeats those acts, the point is no longer to innovate. Instead, it’s to signal that the precedents will last, that these gestures have passed into the permanent inheritance of the Catholic church.

In a sense, one might say that Benedict is becoming a pope of seconds -- and, arguably, those seconds are almost as important as the firsts.

That will be the case again on Oct. 27, when Benedict convenes a cross section of spiritual leaders in Assisi, Italy, repeating John Paul’s historic initiative in favor of peace in 1986. John Paul himself repeated the gesture in 1993 (to pray for peace in the Balkans) and in 2002 (to pray for peace in the world after the terrorist attacks of September 2001). This edition will mark the 25th anniversary of John Paul’s original summit.

Presenting the event in an Oct. 18 Vatican news conference, Cardinal Peter Turkson of Ghana, president of the Pontifical Council for Justice and Peace, called it an “experience of fraternity, a dream that continues and becomes ever more reality … of all the peoples coming together from different points of the Earth, to unite in a single family.”

Though obviously following in John Paul’s footsteps, Benedict is also putting his own wrinkles on the program.

Under John Paul, for instance, the Assisi gatherings were billed as moments of prayer. That led to criticism from Catholics who worried that such a public interreligious exercise flirted with syncretism and relativism. One such voice belonged to then-Cardinal Joseph Ratzinger, who was quoted after the 1986 event as saying, “This cannot be the model.”

Backlash was turbocharged by sensationalist accounts in the Italian press about what happened in 1986 when the followers of other religions fanned out to various sites in Assisi to hold their own services. Veteran Italian Catholic writer Vittorio Messori charged that African animists had sacrificed chickens on the altar of the Basilica of St. Clare, citing it as proof that something had gone deeply wrong.

For the record, the Franciscans who hosted the day’s events have repeatedly denied that such a thing ever happened, insisting that the Basilica of St. Clare wasn’t even open. Nevertheless, the report still surfaces in traditionalist circles critical of the Assisi enterprise.

This time around, the Assisi gathering is being billed as a “pilgrimage” rather than a joint prayer for peace. Participants will gather at the end of the day for a moment of silence and testimonials to peace, but nothing that might be interpreted as common prayer.

Turkson made a point during the news conference of rejecting any form of “syncretism, which obscures identity.”

The day’s official theme is “Pilgrims of truth, pilgrims of peace.” Turkson said the emphasis on truth is not opposed to dialogue, because “the truth can never be exhausted.”

Another distinct touch from Benedict is the inclusion of four high-profile nonbelievers on the guest list, including Austrian economist Walter Baier and Bulgarian-French psychoanalyst Julia Kristeva. Benedict has made the effort to start a conversation about reason and faith a core theme of his papacy.

These secular intellectuals are people who have figured prominently in the “Courtyard of the Gentiles” project of Italian Cardinal Gianfranco Ravasi, president of the Pontifical Council for Culture, which is the Vatican’s highest-profile effort to reach out to nonbelievers.

Roughly 200 spiritual leaders are expected to take part in the Assisi event. Christians are scheduled to include Archbishop Rowan Williams of Canterbury, leader of the Anglican Communion; and Ecumenical Patriarch Bartholomew of Constantinople, “first among equals” in the Orthodox world. Leaders from the Jewish, Muslim, Hindu, Buddhist, Jain, Sikh, Zoroastrian, Confucian, Baha’i and Taoist traditions will participate, along with indigenous religions from Africa, Latin America and Asia.

The Muslims include Prince Ghazi Bin Talal of Jordan, who will sit next to Benedict at lunch. Ghazi is a leader in interfaith dialogue, and was among the signatories to a letter from Muslim leaders to Benedict after his controversial September 2006 speech in Regensburg, Germany, which some took as linking the Prophet Muhammad with violence.

In a signal of ongoing challenges in the Catholic/Muslim relationship, the Al-Azhar University and Mosque complex in Cairo, Egypt, sometimes referred to as “the Vatican of the Sunni world,” has reportedly declined to send a representative. Al-Azhar announced in January that it was breaking off dialogue with the Vatican after a speech in which Benedict called for greater protection for Egypt’s Coptic Christian minority, which some saw as interference in the country’s internal affairs.

Participants will make their way from Rome to Assisi aboard a special train departing from the Vatican’s seldom-used station. That, too, repeats a gesture from John Paul, who traveled by train with other religious leaders for the Assisi gathering in 2002.

This voyage, however, won’t be quite as inclusive; unlike John Paul’s convoy, this time around no journalists will be allowed to ride on the train.

Vatican | Benedict a pope of seconds in Assisi

Pope, Christian leaders around the globe join in prayer for pandemic's end