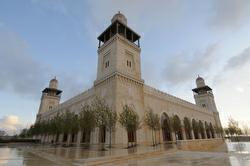 The late Pope John Paul II reigned so long and did so much that it’s difficult to imagine Benedict XVI surpassing his records in most areas, especially after a scant four years in office. Today, however, Benedict moved past John Paul II in one telling category: He’s doubled his predecessor’s total of mosques which he actually entered.

Late this morning, Benedict visited the Hussein bin-Talal mosque in the Jordanian capital of Amman. That makes two mosque tours for Benedict XVI, after a visit to the legendary Blue Mosque in Istanbul, Turkey, in late 2006. Though John Paul made appearances at many mosques over the years, he only entered one – the Umayyad Mosque in Damascus, Syria, in 2001.

Granted, the visit in Amman wasn’t quite the same stunner as Istanbul. For one thing, the symbolism was different; Benedict didn’t share a moment of silent prayer with an imam, and he didn’t take off his shoes. He did both in the Blue Mosque in 2006.

Nonetheless, the pope’s choice to go to the mosque at all, which is named for Jordan’s late King Hussein, offered further confirmation of the rising importance of Islam for this pope and for the broader Catholic church.

In his address, Benedict delivered a version of what has, in effect, become his standard “stump speech” when addressing Muslim audiences: Islam and Christianity as natural allies in defense of common values and a positive role for religion in society, but, at the same time, the need to reject extremism and to respect religious freedom. The latter tends to be an especially urgent concern for church leaders, given the limitations and occasional persecution facing Christian minorities in some Islamic societies.

“Because of the burden of our common history, so often marked by misunderstanding,” Benedict said, Muslims and Christians must “bear witness to all that is good and true,” especially “the common origin and dignity of all human persons.”

Praising Jordan’s leadership in inter-faith dialogue, Benedict said it coincides with his own emphasis on “the fundamental contradiction of resorting to violence in the name of God.”

Benedict also called for respect for religious freedom, which, he said, “extends beyond the question of worship and includes the right – especially of minorities – to fair access to the employment market and other spheres of civic life.”

Benedict added a special word on Christians in Iraq, acknowledging the presence at the mosque in Amman of the Catholic patriarch of Baghdad, Emmanuel III Delly. In the wake of the two Gulf Wars, roughly one million Iraqis have arrived in Jordan as refugees, including a disproportionate share of Iraq’s Christian population, fleeing both war and a rising tide of Islamic fundamentalism.

“I urge diplomats and the international community they represent, together with local political and religious leaders, to do everything possible to ensure the ancient Christian community of that noble land its fundamental right to peaceful coexistence with their fellow citizens,” the pope said.

Prince Ghazi bin Muhammad bin Talal, a cousin of King Abdullah II, welcomed Benedict to the mosque this morning. Ghazi is widely seen as a leader in inter-faith relations, and played a key role in organizing a positive response from Islamic clerics and scholars to Benedict’s controversial 2006 speech in Regensburg, Germany, in which be quoted a Byzantine emperor who asserted that Muhammad, the founder of Islam, “brought things only evil and inhuman.”

Using careful diplomatic language, Ghazi thanked Benedict for the “regret” the pope expressed after Regensburg. Whether or not the pope adequately apologized for Regensburg has been a matter of some controversy here, as officials with the Muslim Brotherhood in Jordan and its political wing, the Islamic Action Front, have demanded a clearer apology from the pope.

Ghazi recalled the ancient roots of Christian-Muslim coexistence in Jordan. He recalled, for example, that in 630 A.D, local Christian tribes joined an army led by Muhammad in a battle against a Byzantine army -- even though these Christians were mostly Orthodox, as were the Byzantines. In fact, Ghazi pointed out, the current Latin Patriarch of Jerusalem, Jordanian Archbishop Foaud Twal, is a Jordanian and a descendent of one of those tribes.

As the pope moved through the Hussein mosque, he was accompanied by Ghazi and an architect who explained aspects of its design and history, not by an imam or other Muslim cleric. Fr. Federico Lombardi, the Vatican spokesperson, said during a briefing for reporters shortly after the visit that the pope didn’t pray. Instead, Lombardi said, his attitude was one of “respectful reflection.”

Lombardi also said the pope didn’t take off his shoes before entering the mosque because his hosts had arranged strips of carpet to walk along.

“We were all ready to take off our shoes,” Lombardi said. “But the people who welcomed us didn’t ask us to do it … It would be absolutely wrong to make a problem out of it.”

Earlier today, Benedict XVI visited an ancient basilica at Mt. Nebo, which tradition regards as the place where Moses looked upon the Promised Land. Benedict used the opportunity to offer his first gesture to Judaism, which will become a more prominent theme when he reaches Israel next week. The site on Mt. Nebo, he said, “reminds us of the inseparable bond between the church and the Jewish people.”

Benedict also blessed the cornerstone of a new Catholic university in Jordan operated by the Latin Patriarchate, saying that it illustrates the importance of education for “breaking the spell cast by ideologies old and new.”

“Religion is disfigured when pressed into the service of ignorance or prejudice, contempt, violence and abuse,” he said.

Later today, Benedict will take part in a vespers service at the Greek Melkite Cathedral of Saint Georges in Amman, when he is expected to stress the importance of the Eastern Christian tradition. It’s also an opportunity for Benedict to offer encouragement to the Christian population, not only of Jordan but also throughout the Middle East.

Listen to NCR speak to the BBC about Wesolowski