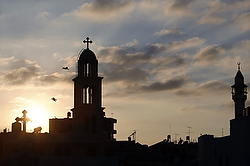 The tower of a church and the minaret of a nearby mosque are seen in the West Bank city of Ramallah Oct. 6. (CNS photo/Mohamad Torokman, Reuters)

ROME -- Given the setting of the Middle East, Christians are compelled to pursue dialogue with the vast Muslim majority; in fact, it would be virtually impossible to avoid.

Several participants at the Oct. 10-24 Synod of Bishops for the Middle East, however, seem eager to push that dialogue beyond a “tea and cookies” stage, where the point is merely being polite to one another, into blunt talk about religious freedom, democracy, and what one speaker described as “satanic plans by fundamental extremist groups” to extinguish Christianity in the region.

While it’s not clear what real impact either the local churches of the Middle East or Catholicism generally can have on those fronts, there appears to be a strong feeling in the synod that it’s time to lay things on the line.

One such call came from Archbishop Cyrille Salim Bustros, a Greek-Melkite prelate in the United States.

Read the full report here: Beyond a 'tea and cookies' dialogue with Islam

Vatican | Beyond a 'tea and cookies' dialogue with Islam