Can a teaching pope get his house in order? 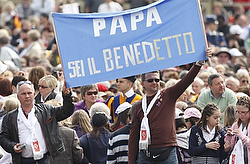 Pilgrims hold a sign in Italian saying "Pope, you are the blessed one," before the start of Pope Benedict XVI's general audience in St. Peter's Square at the Vatican April 14. The word "Benedetto" is the pope's first name, which means blessed in Italian . (CNS photo/Paul Haring)

Some years ago, after a speech he delivered in Paris drew a bit of negative reaction, then-Cardinal Joseph Ratzinger told friends he wasn’t worried. “I’m like the cellist Rostropovich,” he joked. “I never read the critics.”

That’s a policy Benedict XVI might want to preserve over the next few days, marking both his 83rd birthday today and the five-year anniversary of his papacy on Monday after a brief weekend stop in Malta. Especially in light of recent events, even the best reviews the pope’s likely to draw as these milestones roll by seem certain to be mixed.

The largest news magazine in his homeland of Germany, Der Spiegel, recently proclaimed Benedict’s regime a “Failed Papacy.” Meanwhile, an obscene phrase was spray-painted earlier this week on the house where Benedict XVI was born in Marktl am Inn, in southern Bavaria, and even in ultra-Catholic Malta, posters announcing the pope’s visit have been defaced with Hitler moustaches and references to pedophilia. In the United Kingdom, some voices are even proposing a criminal indictment against Benedict XVI when he arrives in September as the alleged mastermind of a global conspiracy to shelter predator priests. (At the bottom of this column is a link to my take on that idea.)

In that climate, a balanced perspective on Benedict is likely to be hard to find. For what it’s worth, here’s my stab at it: If John Paul II was a “Pope of Surprises,” Benedict XVI after five years seems more like a “Pope of Ironies.”

At least four such ironies come to mind:


Collectively, what these ironies point to is a sharp contrast between “insider” and “outsider” perceptions of Benedict XVI.

For insiders, Benedict looms as one of the great teaching popes of the last couple of centuries. His three encyclicals to date -- Deus Caritas Est in 2005, Spe Salvi in 2007, and Caritas in Veritate in 2009 -- won generally high marks across the ideological and theological spectrum, and drew mostly positive notices on the editorial pages of newspapers around the world. Deus Caritas Est in particular turned heads, since a man known for a quarter-century as the great “Doctor No” of the Catholic church wrote on erotic love in surprisingly warm, almost poetic terms. Caritas in Veritate was the most comprehensive effort yet in papal social teaching to integrate the church’s pro-life and its peace-and-justice message, proving that this lofty academic theologian can also be a keen social critic.

Benedict’s speeches on his foreign trips likewise have managed to impress both pious believers and skeptical secular audiences, such as his address on the Western monastic tradition and what it has to offer to the 21st century at the Collège des Bernardins in Paris in September 2008. The pope’s regular catechetical addresses at his Wednesday General Audience generally strike people as lucid, well-crafted, and spiritually rich.

Benedict’s 2007 book Jesus of Nazareth may not have drawn unanimous consensus in terms of its Biblical exegesis, but even critical reviewers were struck by its intelligence and clarity -- as well as by Benedict’s explicit invitation to challenge his conclusions, since he was not speaking definitively as pope.

Those who know Benedict XVI realize that these are the episodes from the last five years which he’s thought about the most, which are most important to him, and which best reflect his personal imprint. Arguably, they are among the aspects of his pontificate most likely to stand the test of time, and that may be of consolation to a pope who legendarily “thinks in centuries.”

Of course, this is not what the outside world sees, and it’s definitely not the dominant media storyline. Instead, for the vast majority of people on the planet, Benedict’s pontificate has been defined largely by its train-wrecks.

The sex abuse crisis happens to be the meltdown du jour, but it’s hardly an isolated case. The list is depressingly long: the furor over Benedict’s September 2006 speech in Regensburg, which many Muslims took as an insult to Muhammad; the 2007 controversy over the Latin Mass and the Good Friday prayer for the conversion of Jews; comments in Brazil that same year that appeared to celebrate the forced conversion of indigenous persons; his 2009 lifting of the excommunications of four traditionalist bishops, including one who’s a Holocaust-denier; a cause célèbre related to comments en route to Africa in March 2009 suggesting that condoms make the AIDS crisis worse; the recent clamor over his decision to welcome traditionalist Anglicans into the Catholic fold; even the surreal “Boffo case” in Italy earlier this year, involving charges that senior Vatican personnel had conspired to leak fake documents suggesting the editor of an Italian Catholic paper was involved in a scandalous gay affair.

All that can’t be reduced simply to a communications problem, because there is also substantive debate on the merits of each of those cases. Yet in virtually every instance, what the pope actually said or did seems far more reasonable when one drills down to the details -- and in virtually every instance, those details were presented by the Vatican ineptly and far too late to make any real difference in public perceptions.

That pattern has never been more evident than in the last few weeks. Objectively speaking, Benedict shouldn’t be the church’s problem in terms of responding to the sex abuse crisis -- he should be the answer. However much unfinished business the Catholic church may still face, the situation would be infinitely worse if then-Cardinal Joseph Ratzinger had not kick-started the process of reform in 2001 by streamlining the system for removing predator priests from ministry; if, as pope, he had he not brought the hammer down on figures such as Fr. Marical Maciel Degollado, founder of the Legionaries of Christ; and had he not broken the Vatican’s wall of silence on the crisis, including becoming the first pope to meet with victims of sexual abuse.

If the Vatican had an effective PR machine, they would have touted Ratzinger from the beginning as the Rudy Giuliani of the Catholic church, the guy who gave us “zero tolerance” policing and thereby cleaned up Times Square. That, alas, is a bit like saying “if pigs could fly,” and so instead the outside world knew little of the pope’s actual record before the current crisis erupted, creating a vacuum in which isolated cases could form a distorted impression.

However much media bias may play a role in stacking the deck against the pope, it’s also true that the Vatican’s “crisis management” strategy has, if anything, made the crisis worse. Over Easter weekend, for example, many media outlets were prepared to dial down their coverage of the sex abuse story, only to whip it up anew because of comments from Fr. Rainero Cantalamessa at the Vatican’s Good Friday liturgy, comparing attacks on Benedict to anti-Semitism, and from Cardinal Angelo Sodano at the Easter Sunday Mass, referring to “petty gossip.” That’s to say nothing of the furor over Cardinal Tarcisio Bertone’s recent statements in Chile suggesting a link between pedophilia and homosexuality, a claim even the Vatican’s own spokesperson, who reports to Bertone, has tried to play down.

The damage done by this commentary has not escaped the attention of church officials around the world, who are often put in the position of picking up the pieces. I know of one senior American prelate, for example, who has written to Benedict XVI urging him to do something about the Vatican’s communications strategy. Some Vatican officials themselves are privately rolling their eyes and longing for something to change.

In turn, the communications problem is part of a larger crisis in governance under Benedict XVI. After five years, it’s clear that Benedict is not interested in the nuts and bolts of internal ecclesiastical administration, and the people he trusts to make the trains run on time have what might be politely described as a spotty record.

Perhaps the bottom line on Benedict’s first five years, therefore, should take the form of a question rather than a conclusion: Is anything going to change? Can Benedict XVI confront the crisis of governance plaguing his papacy, or is his lofty teaching -- what he sees as his real legacy -- destined to remain buried under an avalanche of crisis and dysfunction?

That may be the final irony facing this “Pope of Ironies”: His effectiveness as a teacher, at least in the here and now, may depend upon his willingness to stop teaching for a little while and to get his house in order.

I’m in Rome this week, and will be on the papal plane for the trip to Malta. Watch the “NCR Today” Web site for regular updates over the weekend, and for a wrap-up on the Malta trip on Monday.

Some readers might be interested in a piece I penned for the Spectator: Don’t be daft — you can’t put the Pope on trial

Vatican | Can a teaching pope get his house in order?

Pope: Euthanasia legislation in Europe is sign of 'throwaway culture'