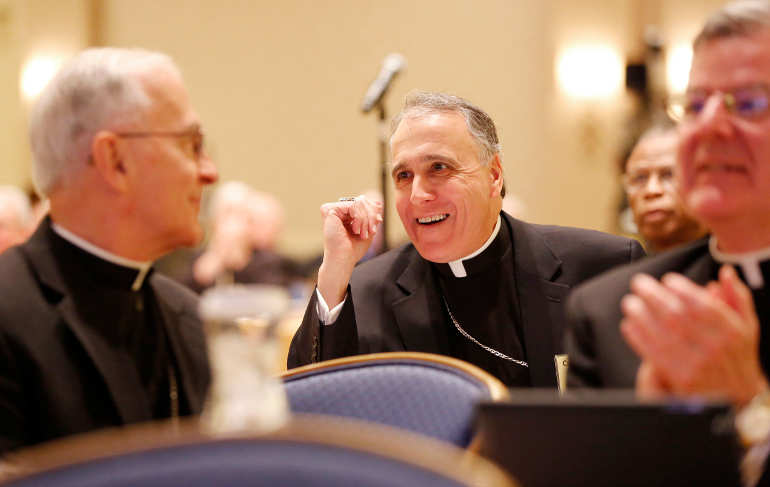 Pope Francis should use his platform as the first pontiff to speak before a joint session of the U.S. Congress to talk about Catholic teaching regarding the unborn, an American cardinal has said.

Galveston-Houston Cardinal Daniel DiNardo, vice president of the U.S. bishops' conference, said he hopes Francis will use his visit to the U.S. in September to primarily speak about issues facing the family.

"I think, knowing Pope Francis, he's attuned to the poor and the immigrant," said DiNardo. "But some people say that he hasn't said as much about the unborn or about pro-life [issues]."

"But when he talks, he's very strong on it," he continued. "So I know he's going to do that when he comes."

DiNardo was speaking Saturday in an interview with NCR. He was responding to a question regarding what he hopes Francis might say when speaking before Congress, which Speaker of the House John Boehner has confirmed the pope will do Sept. 24.

The cardinal also said he hoped the pope, in both the Congressional address and in an expected talk before the U.N. during his trip, would refer back to issues facing the family as a way to draw attention to Philadelphia's World Meeting of Families being held Sept. 22-25.

"My hope is that he speaks very intensely on the family, that no matter where he goes everybody knows that he came here because of the international [meeting] on the family," said DiNardo.

The cardinal, who has led the Galveston-Houston archdiocese since 2006, attended a formal ceremony at the Vatican on Saturday morning to add 20 new members to the College of Cardinals.

The interview, held at the Pontifical North American College, saw DiNardo speak at length about the wide impact Francis has had around the world, closed door meetings at the Vatican to discuss church bureaucracy reform, and an upcoming global meeting of Catholic bishops in October on the issue of family life.

Talking about Francis' impact on the church globally, the cardinal said the pontiff has "brought an element of the dance of the Gospel to the life of the church."

Speaking of what he called a "tired truism" that Francis is making even non-Catholics interested in what he is doing at the Vatican, DiNardo said: "It's as though, with the Lord and the Gospel, he loves to tango."

"In other words, he's brought an element of the dance of the Gospel to the life of the church and therefore to the life of the world," said the cardinal. "He has shown himself particularly sensitive to the poor. He's just been almost dramatic about it. I'd say that's pretty good."

Before Saturday's formal ceremony marking the new cardinals' entry, known as a consistory, some 160 cardinals met in closed sessions Thursday and Friday with Francis to discuss reform of the Vatican bureaucracy, known as the Roman Curia.

DiNardo said one of the reforms facing the most resistance from Vatican officials is the push for transparency and accountability in Vatican finances, which have been long plagued by stories of scandal and misuse.

Francis has been trying to address the problem, creating a new Secretariat for the Economy and a Council for the Economy -- two overlapping institutions to consolidate and control the various groups that deal with the Vatican's finances.

The cardinal said one the initiatives gathering the most resistance is a push to have one consolidated budget for the entire Vatican.

"Well, there's always going to be some [resistance]," he said. "If you've worked here a long time ... you may be comfortable with things and some of the reform looks like a threat."

Francis has appointed Australian Cardinal George Pell to lead the Secretariat and German Cardinal Reinhard Marx to lead the Council. DiNardo is one of several prelates serving as members of the Council, which met in Rome together early last week.

Continuing to describe what he thought some Vatican officials saw as a threat in their work, DiNardo said: "But, in fact, the Secretariat for the Economy isn't trying to get anybody's money away from them, if they're in a dicastery."

"It's just saying, 'We have to know what you have. How do you budget this stuff every year?'" he said. "There has to be a way in which we can present a consolidated budget to the Holy Father."

DiNardo said Pell is "very determined" in his work. "He's incredibly perseverant," said DiNardo. "And if he gets into roadblocks, he says, 'OK. Well, we're just going to keep going ahead.'"

The American also said that Marx brings an Anglo-Saxon background that is helpful.

"To tell you the truth, that's probably needed here," he said. "The Italian way of doing things is beautiful in many ways, but when it comes to finances it can be very frustrating."

DiNardo also said that the Secretariat and Council spent part of the time during their meetings last week putting together statutes for the creation of a new auditor-general for the Vatican, who he said will "roam freely [and] check on anybody."

The American, who served at the Vatican as a staff member for the Congregation for Bishops from 1984 to 1990, also said he was strongly in favor of term limits for those who serve in curial offices.

"I did it for seven years and after seven years I was ready to go home," said DiNardo. "And I think you have to be willing to say, 'It's an important job, but it's like any job that's has somewhat of a bureaucratic touch to it.'"

"I would say to everyone, term limits except in cases where someone has a really important professional competency," he continued.

The cardinal also suggested that Vatican officials receive ongoing education so they never forget that they are at the service of the universal church.

"Once you get people into the curia, you need ongoing professional and spiritual formation of the people who work here, so they always see what they're doing as a form of pastoral care," said DiNardo.

The upcoming Synod of Bishops

The cardinal also spoke Saturday about his role as one of four prelates who have been elected by the U.S. bishops to represent American Catholics at October's bishops' meeting, known as a Synod.

The Synod, which is focused on issues of family life and has attracted hopes that the church might alter some of its pastoral practices in that area, is the second of two called by Francis for 2014 and 2015.

Asked how he is preparing for the Oct. 4-25 event, DiNardo said he is doing "normal consultations" with his priests' council and pastoral council, and that the Houston archdiocese's family life office is also speaking to groups of families together.

"We don't have a huge amount of time," said the cardinal. "We have to do this in a very brief period of time."

"But I told my priests, 'You can send me anything,'" he said. "I'm reading a little bit. That's how I'm going to prepare."

"I'm sure people are going to send me ideas as the time gets closer to the synod," DiNardo said. "I'm willing to read and listen to all kinds of points of view."

He continued: "I certainly have my own sensibilities but -- you want to be receptive because you're representing the ... United States' Catholic church, but of course I'm also myself so I can't deny who I am either."

The cardinal said he most hoped that the October event would support young families.

"If there's one thing I've heard in Houston it's we need to do more support for the families who are really struggling because the culture no longer does that much support," he said.

Asked if there was one place in the United States he would like to show Francis during his visit to the country, DiNardo said he hoped the pontiff could at some point travel to the Midwest or Southwest.

Mentioning statistics from his own archdiocese -- that he has opened 26 new church buildings in the past years, and that last Holy Saturday 2,390 people joined the Houston church -- DiNardo said: "We are in a massive growth model, if you're in Texas. Probably the same would be true in some of the South."