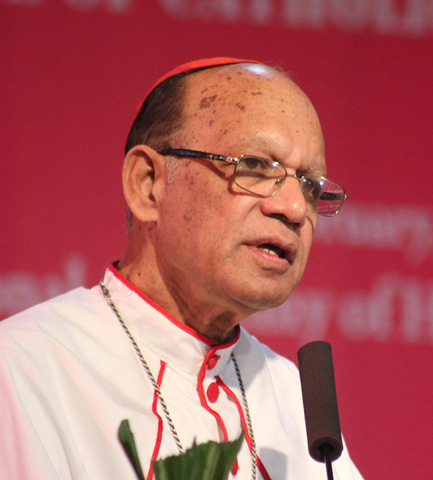 One of the ten prelates responsible for drafting the final document from the ongoing Synod of Bishops on family has said that while it may not give solutions to all the questions discussed by the gathering, it will give good direction to Pope Francis for future decisions.

Indian Cardinal Oswald Gracias said that the document "will not have all the answers, but it will have a direction."

"The questions will be clear," said Gracias, speaking at a press briefing Thursday. "The answers will not be so clear."

The Indian archbishop is helping draft the final document for the Oct. 4-25 Synod, which has seen some 270 prelates discuss a wide range of issues facing families and the church.

Among controversial topics known to be under discussion are the church's stance towards gay people and its practice prohibiting divorced and remarried people from taking Communion.

In answer to a question at the briefing about Pope John Paul II's enunciation of that prohibition in his 1981 encyclical Familiaris Consortio, Gracias said the former pontiff also spoke about how different people face different circumstances "and not to put everybody on the same bus."

Giving an example of a divorce where one of the partners has left the other unjustly, the cardinal said: "You can't treat the two in the same manner." The question, he said, is determining how to treat the two in appropriate ways.

"I think we're still on the path of searching, the whole synod," said the cardinal. "What's marvelous for me is that I'm very happy personally that there was so much diverse opinions among different things."

"I think that's how you cross-fertilize and are able to grow and be able to see the way forward, everybody able to respect the others opinion and knowing the person is sincerely trying to find how can we help our people," he continued.

"As we deepen our understanding, I'm sure we'll find a way forward," said Gracias.

The Indian was speaking as the synod is winding to a conclusion after three long weeks of deliberations. His committee finished a first draft of the final document from the gathering on Thursday morning, which is to be presented to the prelates Thursday afternoon.

The cardinal said the bishops will then have most of Thursday afternoon to read and study the draft, before gathering again Friday morning to discuss it in open session. They will then be able to submit amendments or alterations to the text for consideration.

A final vote on the document is expected for Saturday afternoon. Gracias said he expected the assembly to vote on the text paragraph by paragraph, and then as a whole.

Asked by NCR about the length of the text, the cardinal said it was currently less than 100 paragraphs long.

"We have kept in mind continuously what is the mind of the house," Gracias said of the drafting process. "Very clearly, we're not touching doctrine. This synod is not making doctrine. But it's really seeing what's the pastoral approach, what guidelines can we give."

"In our mind, at the moment, we present it to the Holy Father on Saturday as a result of our reflections," said the cardinal. "And then he'll take it forward, we expect."

"This has got really general directions," he said. "It doesn't get into very, very specific points in that sense."

Gracias also spoke briefly about one suggestion given by some of the small discussion groups at the synod for how the church might change its practice towards the divorced and remarried. Currently, such persons are prohibited from taking the Eucharist unless they have received annulments of their first marriages.

At least two of the 13 small discussion groups -- one Italian language group and the only German-speaking group -- have suggested that the church might be able to use what is called the "internal forum" to allow some remarried persons to take the Eucharist on a private, case-by-case basis after seeking guidance, advice and then permission from priests or bishops.

"Certainly, an internal forum solution is a possibility which we'll have to study," said the cardinal.

"This is ... not new," he said, before referring to a 20th Century Redemptorist priest and renowned moral theologian who was not always in vogue at the Vatican.

"Bernard Haring, the moral theologian, proposed this many, many years ago," said Gracias.