Cardinal Wuerl: Bishops and synod should meet people where they are 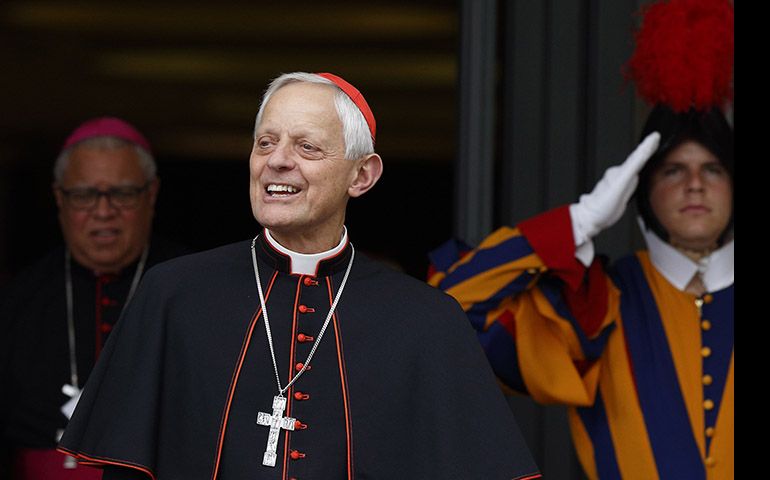 Cardinal Donald W. Wuerl of Washington leaves a session of the Synod of Bishops on the family at the Vatican Oct. 6. (CNS/Paul Haring)
This article appears in the Family Synod 2015 feature series. View the full series.

Rome — One of the main challenges facing Catholic bishops today is to be clear about the church's moral teachings but then also to meet people where they are in life without just admonishing them, Washington's Cardinal Donald Wuerl has said.

Wuerl -- one of nine Americans attending the ongoing Oct. 4-25 Synod of Bishops -- said one concern facing the prelates is wanting to have clarity about church teachings while knowing how to apply the teachings to where people are in their lives.

"I think that's where the heart of the tension is, as if you can't do both," said the cardinal, speaking in an NCR interview Sunday.

"The church's teaching is quite clear," said Wuerl. "But the church's pastoral life is the application of the teaching to where people are. And that's always been the pastoral challenge of the church."

"You have to speak with clarity, but then knowing what the fullness of the teaching is, you go out and meet people where they are," he continued. "And the Holy Father keeps saying to us, 'Accompany them.'"

"You don't go out to meet people where they are to scold them," he said. "You go out to bring them the truth but sometimes to be heard you have to let the person know you know their struggle if you're going to accompany them at all."

Giving as example his own ministry as a bishop for nearly 30 years, the cardinal said a church leader must first listen to know what people need in their lives.

"You have to listen in order to know how to say what you want to say so that you'll be heard," said Wuerl.

"I think that's what the tension is between those who put the greatest emphasis on simply saying it -- and saying it over and over again -- and those who are saying if it's not being heard, we have to go out and begin to listen so that we know how to say this in a way it will be heard," he said. "That's the difference. In neither case are we changing the teaching."

Wuerl was speaking Sunday in a 30-minute interview that saw him touch on some of the discussions at the synod, the second of two Pope Francis has called for 2014 and 2015 to discuss issues of family life.

The 2015 event, which is discussing a wide range of topics, has attracted attention particularly for its deliberations over the church's stance toward divorced and remarried persons and gay people.

The cardinal spoke at length Sunday about the role of discussion in the synod and in the wider church, and also about the interplay between the church's understanding of the concepts of mercy and justice.

But Wuerl spoke most strongly against accusations that the deliberations at the synod had in some way been manipulated, or that the process of its discussions had been constructed to reach certain outcomes.

Mentioning that he has participated in seven synods spanning decades -- and even held the key leadership post, known as the relator, at the 2012 synod focused on the new evangelization -- the cardinal said he could not understand how someone could be unhappy with the process for this year's event.

"It seems to me that this has been one of the most extraordinary efforts to arrive at a consensus that involves more people being engaged in the product than ever before in the life of the synod," said Wuerl. "And I can say that because I've been at a lot of them."

"Now, there are those who have been unhappy," said the cardinal. "I don't know how you would be unhappy with the process if you're really looking at consensus building."

"There seems to be an undercurrent among some saying that these are the things that we want said," he continued. "And they are not able to guarantee at this point that they're going to be said."

Wuerl was referring to public accusations from some cardinals and bishops that the synod has been organized to reach a certain outcome, particularly on its discussions about divorced and remarried people.

In an extraordinary public display of disagreement among the highest levels of the church, a private letter from 13 cardinals to Francis expressing sharp disagreement over the synod was made public last week.

One American, New York Cardinal Timothy Dolan, has confirmed signing the letter. Another, Galveston-Houston Cardinal Daniel DiNardo -- who serves as vice president of the U.S. bishops' conference -- has been alleged to have signed it, but has not commented on the matter.

Wuerl said that the change in process at this synod -- focusing on allowing the some 270 prelates attending more time to discuss matters in small groups -- were largely made to act upon concerns bishops had raised at previous synods.

The cardinal said that at the 2012 synod there as a cry among the bishops: "'Why do we have to sit here so long in this hall and listen to talks one after another after another?'"

"It was Pope Benedict who allowed us the change at least in the afternoon to have one hour of free intervention," said Wuerl. "But even with that, the voice of the bishops in the synod was: 'Why can't we have more time among ourselves?'"

"This synod is designed to do that," he said.

Wuerl also said Francis' choice to appoint ten bishops to a committee to draft the synod's final document was meant to make sure that there was "no one person controlling" that group. The cardinal is one of the ten serving on the committee.

Asked about the interplay between the church's understanding of mercy and justice -- sometimes seen as opposite approaches to how bishops should handle difficult situations like pastoring to divorced and remarried persons -- the cardinal said "the challenge ... is to make sure that we don't separate them as if they are opposed to each other."

"Aren't they both manifestations of the revelation of Jesus?" Wuerl asked. "Jesus is the Word made flesh, he is the truth -- but he's the mercy and love of God made flesh. The two aspects are all one in him."

"One of the priests who's a member of the synod said a beautiful thing in his intervention," the cardinal recounted. "He said the love of God when it encounters the human condition becomes the mercy of God."

"I don't think we can separate the two as if they are opposed to each other," said Wuerl. "Truth and love are two manifestations of the same divine reality. And if that reality is manifested in the church, they have to be found equally active in the church."

"The difficulty, the challenge is we're grappling -- each one of us, each human being -- with how to keep that relationship alive without coming down on one side and forgetting the other," he said.

Wuerl also said the synod might be considered something of a "language event," similar to the Second Vatican Council.

"The Council came in a moment in the life of the church when, as we believe, the Spirit was calling the church to this aggiornamento," said the cardinal. "And so much of it unfolded in the writing of documents, which means you have to understand how the church is now speaking to the issues, to the world, in language that is different, say, than Trent."

"This synod follows on the synod for the New Evangelization where bishop after bishop after bishop got up and said we're living in a whole different context -- the secularism, the relativism, the materialism, the consumerism, the individualism," he continued. "These are all things that that synod spoke about, that Benedict spoke about."

"That's what we're dealing with," he said. "How do we speak to that world about Jesus, his revelation, and the Creed of the church?"

The cardinal said he was not sure if the synod would conclude by issuing a formal final document on its own authority, of if the pope might write an apostolic exhortation about its discussions.

But he did say he thought whatever final document the synod does create will be made public. "You almost have to do that ... lest there be a charge that this is somehow being manipulated," he said.

Vatican | Cardinal Wuerl: Bishops and synod should meet people where they are