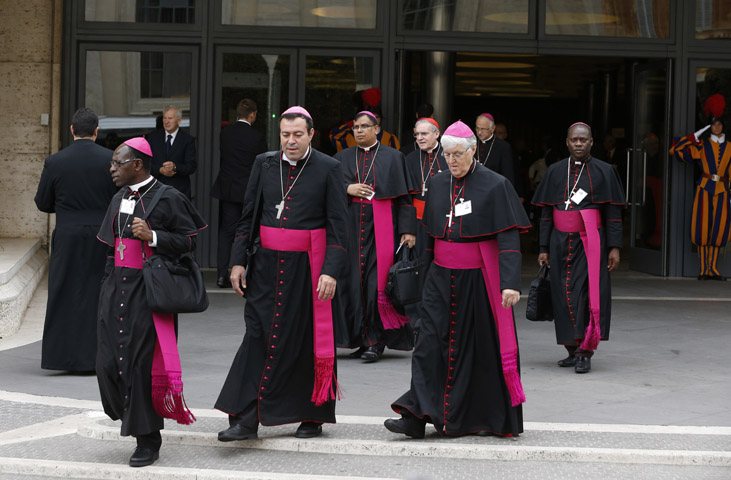 Bishops leave a session of the Synod of Bishops on the family at the Vatican Oct. 9. (CNS/Paul Haring)

Disagreement at the highest levels of the Catholic church about the worldwide meeting of bishops on the family seemed to come to the fore Monday with publication of a private letter from several cardinals to Pope Francis, before a number of the prelates disassociated themselves from the document.

The letter, reportedly given to the pontiff on the first day of the ongoing Synod of Bishops, sees the cardinals sharply criticize the meeting; even saying it "seems designed to facilitate predetermined results on important disputed questions."

But although the letter was first revealed Monday morning with reports of signatures from 13 cardinals, by afternoon at least four of the group had disassociated themselves from it -- saying they had never signed the document or supported its arguments.

The intrigue led Vatican spokesman Jesuit Fr. Federico Lombardi to tell reporters at a mid-day briefing that they should "have caution" in reporting on the document, and verify each of the alleged signatures.

The letter, published in full with a list of signatories Monday morning by Italian journalist Sandro Magister, was allegedly given to the pope Oct. 5 just at the beginning of the work of the Synod of Bishops.

It is written in English and allegedly signed by some of the church's most influential prelates, including several of the synod's presidential delegates -- who are supposed to be helping guide the gathering's work.

The letter states that new procedures adopted for this synod -- that organizers say are meant to promote more discussion among the some 270 bishops attending -- "will be seen in some quarters as lacking openness and genuine collegiality."

The changes "have created a concern that the new procedures are not true to the traditional spirit and purpose of a synod," states the letter.

"It is unclear why these procedural changes are necessary," it states. "A number of fathers feel the new process seems designed to facilitate predetermined results on important disputed questions."

Public revealing of the letter Monday adds a new layer of intrigue to the working of the Oct. 4-25 synod, which has already attracted wide media attention for its discussions on a range of issues -- including sometimes controversial matters like the church's pastoral care of divorced and remarried persons and same-sex couples.

The letter also adds background information to an address Francis made at the synod the morning of Oct. 6, when Vatican spokespersons said he sought to reassure the gathering that the church's doctrine on marriage "was not being put into question" by their meetings.

While that speech has not been made public, one of the synod's attendees said the pontiff asked the group to undergo a "profound discernment … to search to understand how the Lord wants his Church."

The pope, Jesuit Fr. Antonio Spadaro said in tweets that day, had also asked the participants not to give into a "hermeneutic of conspiracy" that is "sociologically weak and spiritually unhelpful."

According to Monday's news, Francis had received the letter from the cardinals the day before making that address.

Magister lists 13 signatories of the letter. As of this writing, four have publicly denied involvement.

Lombardi sought to clear up some of the confusion surrounding the process for the synod at the briefing Monday, speaking particularly to the question of whether the synod will be issuing a final document at its conclusion Oct. 25.

The spokesman said that question is up to the pope. Lombardi said the synod is planning to vote on some sort of final document Oct. 24, which will then be given to Francis. The pope, he said, will determine whether to publish that document "right away" or instead to write a document of his own making, perhaps an apostolic exhortation like his 2013 letter The Joy of the Gospel.

Lombardi and four other spokespeople also gave an overview Monday of the synod's open sessions on Saturday. The synod did not meet Sunday.

Basilian Fr. Thomas Roscia, a Canadian who assists the Vatican press office with English-language media, presented a number of themes touched upon by English speaking bishops during those sessions.

Rosica said one bishop spoke particularly of the need for the church to care for spouses who have become separated, indicating "a need for close pastoral accompaniment of people in difficult situations."

"The church must be an accompanying mother who does not reject anyone, but reaches out to all," Rosica quoted that bishop. "And the key is to remain firm on theological principals but to make ecclesiastical discipline flexible and not impossible for pastorally difficult or near impossible situations."

Rosica said another bishop highlighted the need for the church to work with "new family structures," such as single-parent homes, same-sex couples, and refugee families.

"We have to reach out to those that do not fit our traditional categories," he said. "New families can no longer remain alienated from the church and the church cannot remain absent from these new situations."

Two U.S. archbishops have also posted new reflections on the work of the synod, which appear to be addresses they may have made during Saturday's open session.

New York Cardinal Dolan says in a blog post Monday that there is a "new minority" in the church, namely: "those who, relying on God's grace and mercy, strive for virtue and fidelity."

"These wonderful people today often feel themselves a minority, certainly in culture, but even, at times in the Church!" wrote Dolan. "I believe there are many more of them than we think, but, given today's pressure, they often feel excluded."

"They are looking to the Church, and to us, for support and encouragement, a warm sense of inclusion," he wrote. "We cannot let them down!"

Philadelphia Archbishop Charles Chaput wrote on the meaning of the word inclusive, saying that he had heard "many times that the church should be inclusive."

"But it's very hard to include those who do not wish to be included, or insist on being included on their own terms," wrote Chaput. "To put it another way: I can invite someone into my home, and I can make my home as warm and hospitable as possible. But the person outside my door must still choose to enter."

"The lesson is simple," he wrote. "We need to be a welcoming Church that offers refuge to anyone honestly seeking God. But we need to remain a Church committed to the Word of God, faithful to the wisdom of the Christian tradition, and preaching the truth of Jesus Christ."

The synod prelates are meeting in their 13 small discussion groups Monday and Tuesday, separated by language preference. Those groups are expected to release reports of their discussions Wednesday, before the synod reconvenes into open session that day.