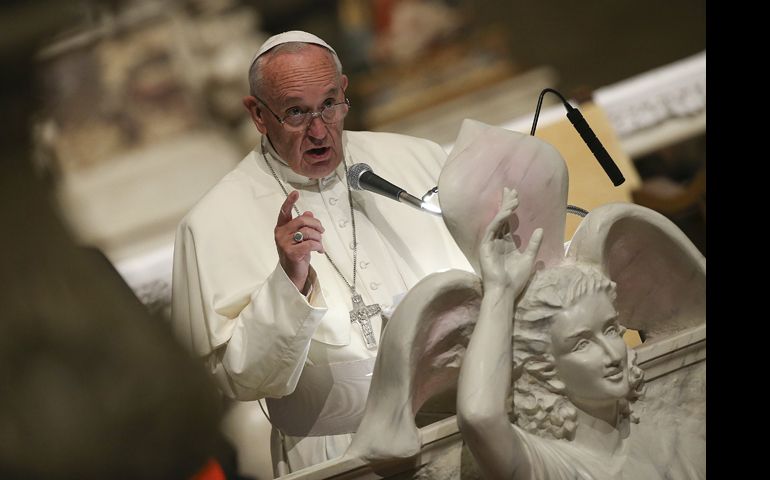 Pope Francis gestures during a meeting with bishops Nov. 10 in the Duomo, the Cathedral of Santa Maria del Fiore in Florence, Italy. (CNS/Alessandro Bianchi, Reuters)

FLORENCE, Italy — Pope Francis has strongly outlined anew a comprehensive vision for the future of the Catholic church, forcefully telling an emblematic meeting of the entire Italian church community here that our times require a deeply merciful Catholicism that is unafraid of change.

In a 49-minute speech to a decennial national conference of the Italian church -- which is bringing together some 2,200 people from 220 dioceses to this historic renaissance city for five days -- Francis said Catholics must realize: "We are not living an era of change but a change of era."

"Before the problems of the church it is not useful to search for solutions in conservatism or fundamentalism, in the restoration of obsolete conduct and forms that no longer have the capacity of being significant culturally," the pontiff said at one point during his remarks.

"Christian doctrine is not a closed system incapable of generating questions, doubts, interrogatives -- but is alive, knows being unsettled, enlivened," said the pope. "It has a face that is not rigid, it has a body that moves and grows, it has a soft flesh: it is called Jesus Christ."

"The reform of the church then, and the church is semper reformanda  ... does not end in the umpteenth plan to change structures," he continued. "It means instead grafting yourself to and rooting yourself in Christ, leaving yourself to be guided by the Spirit -- so that all will be possible with genius and creativity."

Francis was speaking Tuesday on the second day of the Italian church meeting, being held in Florence through Friday. He flew from Rome in a helicopter for a daylong trip that also saw him visit the nearby town of Prato.

The gathering is the fifth such meeting of the Italian church, which bring together bishops and laypeople from across the country to help set the goals and agenda for the work of the national church for the next decade.

The pope's comments were remarkable in their breadth, emphasis, and forceful nature of delivery. As the pontiff spoke in Florence's artistically renowned cathedral, he was interrupted about a dozen times for applause.

Francis was speaking Tuesday to the theme of the Italian gathering, "A new humanism in Jesus Christ." He started his remarks Tuesday with a meditation on the face of Jesus, which is represented in the iconic dome of the Florence Cathedral in a renaissance image of the final judgment.

"Looking at his face, what do we see?" the pontiff asked those in the church of Jesus' face. "Before all, the face of a God who is emptied, a God who has assumed the condition of servant, humble and obedient until death."

"The face of Jesus is similar to that of so many of our humiliated brothers, made slaves, emptied," he said. "God had assumed their face. And that face looks to us."

"Therefore we will not understand anything of Christian humanism and our words will be beautiful ... but will not be words of faith," he continued. "They will be words that resonate with emptiness."

Outlining three aspects of Christian humanism, Francis asked the Italians to adopt an outlook of humility, disinterest in personal praise or power, and of living a life of the beatitudes.

The pope also said there were two specific temptations he wanted to warn the national church against, tying modern day struggles to two ancient heresies of the church: Pelagianism and Gnosticism.

Speaking to Pelagianism, which holds that humans can achieve salvation on their own without divine help, the pontiff said that in the modern day it "brings us to have trust in structures, in organizations, in perfect plans, however abstract."

"Often it brings us to assume a style of control, of hardness, of normalcy," said Francis. "The norm gives to the Pelagian the security of feeling superior, of having a precise orientation. In this is found its force, not in the lightness of the breath of the Spirit."

"The Italian church should let itself be carried by [the Spirit's] powerful breath and for this, sometimes, be settled," the pope said, after his words that the church is always in reform.

"Assume always the Spirit of the great explorers, that on the sea were passionate for navigation in open waters and were not frightened by borders and of storms," the pontiff told the Italians. "May it be a free church and open to the challenges of the present, never in defense for fear of losing something."

Speaking to Gnosticism, which widely held that people should shun the material world in favor of the spiritual realm, Francis identified such thinking today with that which "brings us to trust in logical and clear reasoning ... which however loses the tenderness of the flesh of the brother."

"The difference between Christian transcendence and any form of gnostic spiritualism remains in the mystery of the incarnation," said the pontiff. "Not putting it in practice, not guiding the Word to reality, means building on sand, remaining in pure idea ... which does not give fruit, which make sterile [God's] dynamism."

Francis then asked the Italians, "people and pastors together," to turn to the image of Jesus in Florence's Cathedral and imagine what he might say to them as a sign of how they should go forward in their national work.

"May the beatitudes and the words that we have just read on the universal judgment help us to live the Christian life to the level of sainthood," the pope exhorted. "They are few words, simple, but practical. May the Lord give us the grace to understand this, his message!"

Explaining the beatitudes earlier in the speech, Francis said that in those eight blessings recounted by Jesus in the Sermon on the Mount "the Lord shows us the way."

"Following it, we human beings can come to more authentic and divine happiness," said the pope. "Jesus speaks of the happiness that we feel only when we are poor in spirit."

"On the part of the most humble of our people there is much of this beatitude," said the pontiff. "It is that of who knows the richness of solidarity, of sharing even the little that you have; the richness of the daily sacrifice of work, sometimes hard and poorly paid, but carried out for love towards dear persons."

"If the church does not assume the sentiments of Jesus, it is disoriented, it loses its sense," said Francis. "The beatitudes, in the end, are the mirror in which we see ourselves, that which permits us to know if we are walking on the right path: it is a mirror that does not lie."

Speaking later directly to the prelates in the Cathedral, Francis said bluntly: "To the bishops, I ask you to be pastors. May this be your glory. It will be the people, your flock, that sustain you."

The pontiff said he asked "that nothing and no-one takes away the joy of being sustained by your people."

"As pastors may you not be preachers of complex doctrine, but pronouncers of Christ, dead and resurrected for us," he said. "Aim for the essential, the kerygma."

Francis also spoke about church teaching on the preferential option for the poor -- which holds that Catholics must consider the impact all choices will have on the poorest -- forcefully declaring: "The Lord poured out his blood not for some, not for the few or the many, but for all!"

The pope also spoke at length about the role of dialogue in society, saying it is not simply a negotiation but searching for the good of all people.

Ending the speech, Francis said: "You can say today we are not living an era of change but a change of era."

"The situations that we live today therefore bring new challenges that for us sometimes are difficult to understand," said the pontiff. "This, our time, requires living problems as challenges and not obstacles: the Lord is active in the work of the world.

"You, therefore, go forth to the streets and go to the crossroads: all who you find, call out to them, no one is excluded," he exhorted. "Wherever you are, never build walls or borders, but meeting squares and field hospitals."

"I would like an Italian church that is unsettled, always closer to the abandoned, the forgotten, the imperfect," said Francis. "I desire a happy church with face of a mother, who understands, accompanies, caresses."

"Dream of this church, believe in it, innovate it with freedom," exhorted the pope.

The national gathering of the Italian church began Monday afternoon with an outdoor walking procession from four of Florence's basilica churches to its central Cathedral, famously known for its colorful marble facade and ancient baptistery.

The thousands of participants will be breaking into 20 separate working groups throughout the week, with sections of four groups each focused on one of five themes: A church that goes forth; that announces; that dwells with; that educates; and that transfigures.

Turin Archbishop Cesare Nosiglia, president of the preparatory commission for the conference, opened the event Monday evening by saying: "We are not here to prepare pastoral plans, nor to exchange information, or to attend scholarly conferences or a refresher course."

"The purpose of our Florentine appointment is to take stock of our journey of fidelity to the renewal promoted by the Council and open new avenues to the proclamation of the Gospel," said Nosiglia.

Dozens of cultural events are taking place in Florence around the conference, including a special exhibition at the city's Accademia Gallery on the life of St. Francis of Assisi that was organized especially for the pope with the saint's name.

The exhibition, which is being housed at the same museum that exhibits Michelangelo's famous marble statue of David, gathers a number of striking early depictions of the saint as well as some of his personal effects.

Among them are the horn said to be given to the saint by Egyptian Sultan al-Kamil when Francis is recounted to have made an extraordinary pilgrimage of peace to the Middle East during the fifth Crusade.