Skip to main content
Vatican
This story appears in the World Meeting of Families feature series. View the full series. 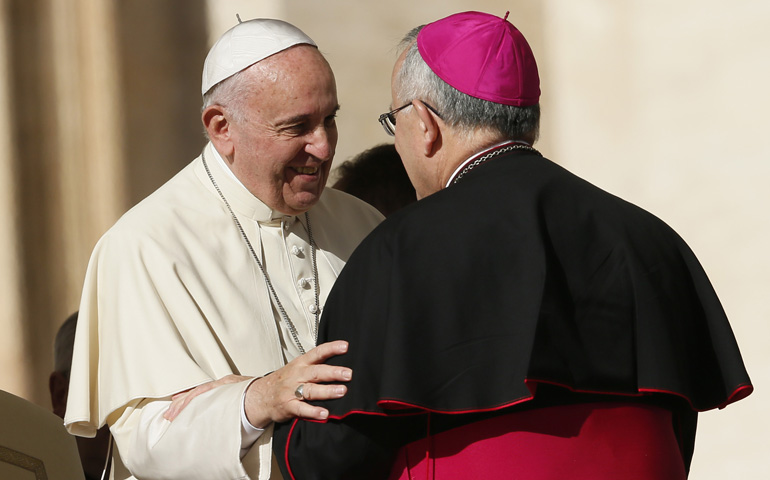 Pope Francis talks with Archbishop Charles Chaput of Philadelphia during his Nov. 19 general audience in St. Peter's Square at the Vatican. (CNS/Paul Haring)

While gay families will be welcome at Philadelphia's global meeting on family life -- to be attended by Pope Francis at the end of his visit to the United States in September -- they will not be given an opportunity to speak about positions contrary to church teaching, Archbishop Charles Chaput said.

At a Vatican press conference detailing the continuing organization for the Sept. 22-25 World Meeting of Families -- the first such event to be held in the U.S. -- Chaput said gay families should feel free to join the expected 15,000 participants.

"We hope that everyone feels welcome to come, and certainly people who have experienced same-sex attraction are certainly welcome like anyone else," he said.

But, the archbishop added, "we don't want to provide a platform at the meeting for people to lobby for positions contrary to the life of our church, so we're not providing that kind of lobbying opportunity."

Chaput was responding to a question at the press conference regarding how the global meeting will welcome gay families or speak to particular issues they face.

The World Meeting of Families is a triennial event that the Vatican's Pontifical Council for the Family has organized since the first meeting in Rome in 1994. The Philadelphia gathering will be the eighth such meeting.

Francis is expected to come to the United States around Sept. 22-27 after first visiting Cuba. While the pope's official schedule for his U.S. visit is yet to be released, Philadelphia officials said they are expecting the pope to speak to the family gathering and to celebrate a public Mass there on Benjamin Franklin Parkway.

The pope is coming to Philadelphia after first visiting Washington, D.C., where he will meet with President Barack Obama and give an address to a joint session of Congress, and New York, where he will speak to the United Nations.

Chaput was part of a delegation to Rome this week along with Philadelphia Mayor Michael Nutter and many of the organizers of the family meeting. The delegation, the latest in several made by the meeting's organizers, met with Francis briefly Wednesday during his weekly general audience in St. Peter's Square.

The archbishop said the family meeting already has about 12,000 registrants and has also attracted about 6,100 volunteers to help with organization. He also said they are offering scholarships for people who cannot afford to attend from many U.S. dioceses and from every diocese in Mexico.

Philadelphia Auxiliary Bishop John McIntyre also addressed the issue of gay families attending the meeting at the press conference, saying the event will see a talk by a gay man named Ron Belgau, who has chosen to remain celibate.

"He'll talk about his coming to terms with his sexual orientation and the manner in which he embraced the teaching of Christ and the church in that process," McIntyre said.

The auxiliary bishop said Belgau, who is part of group of celibate gay Catholics called Spiritual Friendship, will speak at the event with his mother.

Archbishop Vincenzo Paglia, the head of the pontifical council, said at the press conference that Francis plans to make a special gesture at the end of his visit to Philadelphia by gifting copies of Luke's Gospel to five families from around the world.

"This is a symbolic gesture that will announce the sending of a million copies of this book to the five cities involved," he said. "We want the gospel of mercy to be announced in the great cities of the world, especially in poorer and peripheral neighborhoods."