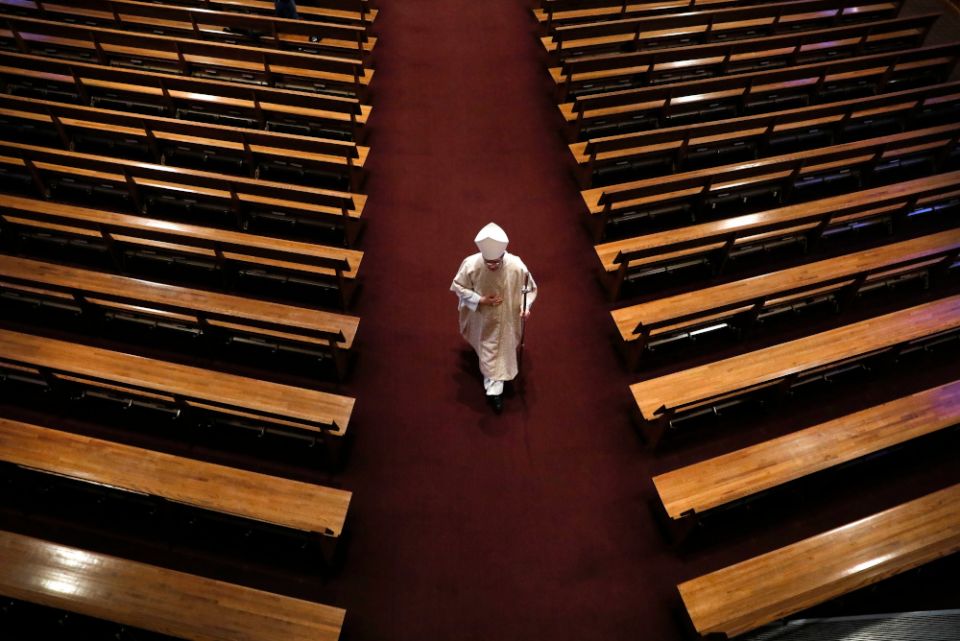 Bishop William Joensen proceeds down the main aisle at the conclusion of Holy Thursday Mass in a near empty St. Ambrose Cathedral, Thursday, April 9, 2020, in Des Moines, Iowa. The total number of priests in the world decreased to 414,065 in 2018, with Europe registering a drop of 2,675 priests compared to 2017. (AP/Charlie Neibergall)

Vatican City — Catholic missions are struggling amid dwindling vocations and the COVID-19 pandemic, according to data released Oct. 18 by the Vatican ahead of World Mission Day.

The number of priests and ordained leaders has dropped significantly, especially in Europe and America, according to the report issued on Friday by the Vatican Congregation for the Evangelization of Peoples, charged with distributing clergy and coordinating missions around the world.

(Vatican data considers both South and North America when referring to America.)

The total number of priests in the world decreased to 414,065 in 2018, with Europe registering a drop of 2,675 priests compared to 2017. The report also reveals a slight decrease in the number of Catholic faithful in America, Europe and Oceania. Meanwhile, Africa and Asia continue to show signs of growth, according to the data.

"We mustn't be afraid! Mission goes on thanks to the power of the Holy Spirit," said Archbishop Protase Rugambwa, the secretary of the evangelizing congregation, during a press conference at the Vatican on Friday.

However, the diminishing number of clergy coincides with an increase in the global population, putting pressure on priests who must minister to larger numbers of people. As of December 2018, the report shows, there are 1,328,993,000 Catholics in the world.

As a result, there are an average of 14,638 people per priest, with an average of 3,210 Catholics per priest. This shortage of priests combined with a growing population have put a strain on evangelizing and missionary efforts globally.

The number of women leaders has also experienced a decline of 7,249 sisters, a drop similar to the one reported in 2017. Once again, the data shows, Europe and America have experienced the most significant decrease in women religious.

The number of seminarians declined, especially in America and Europe. In particular, minor seminaries for high-school-age individuals wishing to become priests has dropped for the third consecutive year everywhere except in Asia.

The reasons for the steady hemorrhage of Catholic clergy worldwide are varied, from secularization to the church's ongoing sexual and financial scandals. But the COVID-19 pandemic has also created a challenge for donations after closing churches and stalling missionary efforts. 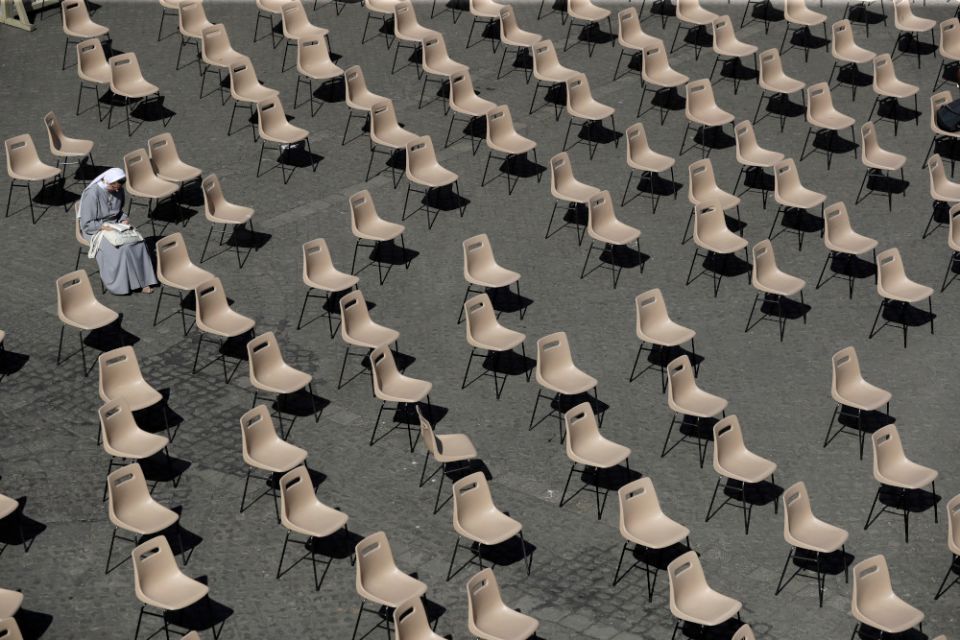 "The biggest challenge that many churches in mission territories had to face was church closures and therefore the lack of celebration and the resulting lack of collection at Mass," said Archbishop Giampietro Dal Toso, president of the Pontifical Mission Societies, at the press conference.

"As you can easily imagine, many of these ecclesial realities rely solely on Sunday offerings and don't have a centralized system of support," he added.

In order to ease the financial struggles brought on by the pandemic, Pope Francis created an emergency fund for missions worldwide, comprising $1,299,700 collected globally, used to sustain more than 250 missionary projects.

Most of the money was sent to local dioceses for the support of priests, Dal Toso explained, as well as Catholic communities, schools and struggling family units.

While the number of clergy might be declining globally, the presence of lay missionaries is on the rise. The number of lay Catholic missionaries has grown by 20,388, to a total of 376,188, primarily in America and Asia.

The theme of this year's World Mission Day, which falls on Oct. 18, is "Here am I, send me." Its purpose is to highlight the missionary efforts led by the Catholic Church and organize events globally to promote donations. This year, due to the pandemic, the events will for the most part take place virtually.

In his message for the global Catholic event, Pope Francis acknowledged that "understanding what God is saying to us at this time of pandemic also represents a challenge for the Church's mission."

"In this context, the call to mission, the invitation to step out of ourselves for love of God and neighbor, presents itself as an opportunity for sharing, service and intercessory prayer," he added.