The complex legacy of Benedict XVI 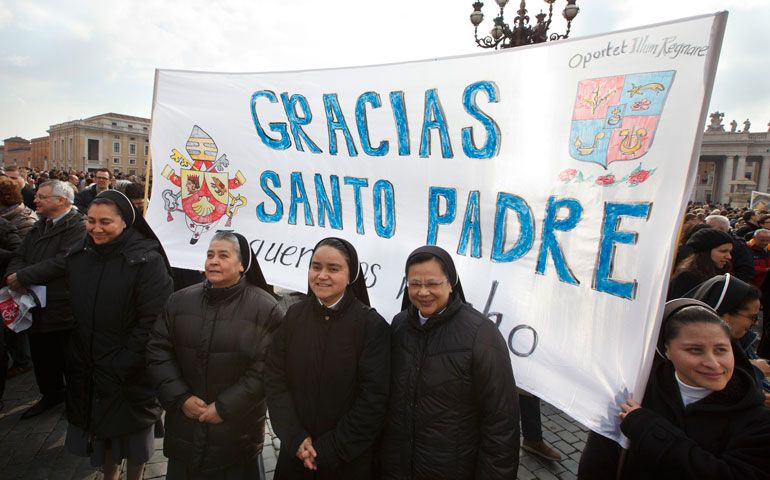 Nuns hold a banner thanking Pope Benedict XVI before he delivers the Angelus from the window of his apartment overlooking St. Peter’s Square at the Vatican Feb. 17. (CNS/Paul Haring)
This article appears in the Benedict Resigns feature series. View the full series.

Rome — At least twice during his quarter-century span as the Vatican's doctrinal czar, the celebrated and controversial Cardinal Joseph Ratzinger told Pope John Paul II he wanted to retire, spending his golden years either puttering in the Vatican library or returning to his native Bavaria to indulge his taste for books, music and quiet.

Retirement, as it turned out, would have to wait.

Instead, John Paul kept Ratzinger at his right hand until the very end, and on April 19, 2005, at the age of 78, Ratzinger was elected to succeed him. As Benedict XVI, he led a tumultuous papacy marked by high intellectual achievement but also deep controversy, including the still unresolved child sexual abuse scandals and a massive Vatican leaks crisis.

Now that Benedict is finally in a position to grant his own wish to step down, the debate over his legacy is officially open.

Fans say Benedict was a great "teaching pope" who also presided over a quiet cleansing of the church's Augean stables, promoting a financial glasnost, committing the church to reform in the fight against clerical sexual abuse, and challenging the careerist and self-aggrandizing culture in the Vatican -- most notably, of course, by being willing to renounce the pinnacle of power himself.

Critics may acknowledge that Benedict was a gentle and sincere man, but generally insist he presided over a controversial and sometimes failed pontificate. That tends to be an especially popular verdict in more liberal circles.

These observers cite crackdowns on nuns and liberal theologians on Benedict's watch, the pope's red carpet for traditionalist Anglicans and his outreach to the Lefebvrists without any similar overtures to progressive dissent, his resurrection of the old Latin Mass, and his repeated insistence on a "hermeneutic of reform ... in continuity" for understanding the Second Vatican Council (1962-65).

On the sex abuse scandals, critics say whatever progress Benedict achieved was more symbolic than substantive. They charge that he left too much undone, beginning with accountability for bishops who dropped the ball. They cite the fact that in the United States, for instance, a bishop who was convicted of failure to report suspected child abuse, Robert Finn of Kansas City-St. Joseph, Mo., was not removed from office.

In the Vatican itself, there was always a subtle current that held that Benedict may be a world-class intellectual but he was out of his depth as a CEO, sometimes leaving the church rudderless. Even his resignation stirred sotto voce resentment, with Vatican insiders grumbling that plans for the timing of the conclave to elect his successor should have been worked out in advance rather than left hanging.

As with any tenure in high office, the moment passions are at their peak is often the wrong time for taking stock.

Admirers believe Benedict's reputation will only grow with time. They often point to Pope Paul VI (1963-78), who also followed a charismatic predecessor, John XXIII, and sometimes suffered in comparison. Paul's papacy too was often engulfed in controversy and mired by internal breakdowns, and many perceived him as cold, aloof and isolated. Yet today, many remember Paul VI as a hero who held the church together during the tumultuous post-Vatican II years, and he is a candidate for sainthood.

Another parallel might be Pope Leo XIII, the only pontiff in the last 150 years to be as old as Benedict while still in office. During his day, he was attacked by partisans on both sides of the "Roman question" in Italy -- hard-core papal loyalists found him too soft, while zealous Republicans blasted him as intransigent. Yet more than a century later, Leo XIII is hailed as a great intellectual who launched the modern tradition of Catholic social teaching.

Perhaps over time, what will loom largest about Benedict will be his "affirmative orthodoxy," meaning his emphasis on phrasing classic Christian doctrine in terms of what the church supports rather than what it opposes. As he put it in 2006: "Christianity, Catholicism, isn't a collection of prohibitions. It's a positive option. It's very important that we look at it again, because this idea has almost completely disappeared today."

Perhaps down the line, Benedict's legacy will be defined by his keen analysis of faith, reason and democracy, providing an intellectual basis for détente with "healthy secularism." Perhaps it will be his insistence that the pro-life and peace-and-justice components of Catholic social thought belong together, which offered a sharp rebuke to the tendency in various quarters of the church to split them apart.

Perhaps what people will remember will simply be the kindness and humility of the man, which some found a refreshing contrast to the swashbuckling swagger and rock star feel of the John Paul years.

It's also entirely possible that Benedict may have reframed how people will see his papacy by the way he chose to end it. Although it's an inexact parallel, consider Pope Celestine V in 1294, the last pope to freely renounce his office. Dante famously consigned Celestine to the antechambers of hell for his "great refusal," but history has been more kind. Today, Celestine is usually styled as a selfless figure not addicted to power, and Benedict may enjoy a similar spike in affection.

In the here and now, however, Benedict's record can't help but seem mixed.

For every profound insight and deft turn of phrase, there was a controversy, administrative misstep, or PR disaster. Some of that may have been the unavoidable price of defending what Benedict saw as the truth in a world that didn't always want to hear it, but some of it was undeniably self-inflicted and ill-advised.

A legacy, of course, is partially in the eye of the beholder. For many feminists, gays, dissident theologians, liberal Catholics of various stripes, and victims of clerical abuse, Benedict simply wasn't the pope they wanted. Others will be inclined to celebrate Benedict not so much for what he did, but what he represented.

For his part, Benedict probably won't be terribly interested in the discussion. He is, after all, a man who once joked to a French friend after the Paris papers had been hard on one of his speeches, "I'm like the cellist Rostropovich -- I never read the critics."

For someone who proclaimed himself a "humble laborer in the vineyard of the Lord" in his first remarks as the bishop of Rome, it's probably enough to say he tried his best and had the courage to walk away when he believed his best was no longer good enough.

South Sudan's leaders will head to Vatican for meetings, retreat