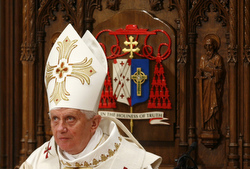 Pope Benedict XVI is seated in the cathedra during the Liturgy of the Word during Mass at St. Patrick's Cathedral in New York April. 19, 2008. (CNS photo/Gary Hershorn, Reuters)

WASHINGTON -- “No doctrine is understood as defined infallibly unless this is manifestly evident,” says Canon 749.3 of the church’s Code of Canon Law.

Jesuit Fr. Ladislas Orsy, professor of law at Georgetown University here, cited that canon almost immediately when NCR asked him if Pope John Paul II’s 1994 teaching in Ordinatio Sacerdotalis “that the church has no authority whatsoever to confer priestly ordination on women and that this judgment is to be definitively held by all the church’s faithful” is infallible.

Orsy, a leading canonist well-known for his theological expertise, acknowledged, however, that the question of which church doctrines are taught infallibly is “extremely complex.”

Another leading Jesuit theologian, Fr. Francis Sullivan, said he thinks recent events have made it clear that the church is now presenting as infallible the teaching against women priests.

NCR raised the question after Bishop William Morris of Toowoomba, Australia, stated in a national radio interview that a letter from Pope Benedict XVI ordering his early retirement said that the late Pope John Paul II “decided infallibly and irrevocably that the church has not the right to ordain women to the priesthood.”

Benedict ordered Morris, 67 and bishop of Toowoomba for the past 18 years, to take early retirement following an investigation into a pastoral letter he wrote in December 2006 in which he expressed openness to ordaining women and married men, if the Vatican would allow it, in order to counter the priest shortage.

Sullivan -- a leading ecclesiologist who taught theology at the Pontifical Gregorian University in Rome for many years and is now professor emeritus of theology at Boston College -- also stressed the complexities of determining what church teachings are infallible.

In a telephone interview he said he did not regard Ordinatio Sacerdotalis itself as presenting an infallible papal teaching -- but he noted that a later document by the Vatican Congregation for the Doctrine of the Faith (then headed by Cardinal Joseph Ratzinger, who is now Pope Benedict) asserted that what John Paul affirmed in that apostolic letter represented infallible teaching -- not by the pope invoking his own authority, but as the constant teaching of the world’s bishops exercising their ordinary magisterium, or teaching authority.

Orsy and Sullivan both warned against oversimplified interpretations of whether the church’s doctrinal position against the ordination of women is infallible. (Full disclosure: Orsy, in the course of the interview, included NCR’s coverage of the Morris case among the media that he regarded as not taking full account of the complexity of the issue.)

“If it’s a disciplinary letter, the point is that he’s removed [from his office as bishop],” Orsy said. “Now if they give a reason, I do not know. I would not venture to say immediately, without looking at the document, what is the value of any assertion inside the document” regarding substantive doctrinal issues such as the status of the teaching in Ordinatio Sacerdotalis.

“One has to look at the original document and fit it into this very, very difficult issue of papal infallibility,” he added. “Ever since Vatican II, the interpretations are very, very complicated and difficult.”

“The pope can remove Morris even if it [the papal teaching on women’s ordination to the priesthood] is not infallible -- there’s no doubt about that,” he said.

He said he would “go along” with Sullivan’s reservations about the infallible status of the papal declaration in Ordinatio Sacerdotalis.

When NCR asked Sullivan whether he regards the teaching in Ordinatio Sacerdotalis as manifestly infallible, he said, “No. I don’t think so.”

But he also said, “It’s infallibly taught -- at least the Congregation for the Doctrine of the Faith has declared -- and I don’t want to contradict it.”

Fr. Charles E. Curran, a moral theologian at Southern Methodist University in Dallas, also cited the canon that nothing is to be regarded as infallible doctrine unless it is manifestly so.

“There’s no doubt in my mind that Ratzinger wants to say it’s infallible, and that he has said that” in his 1995 response, as then head of the Vatican’s doctrinal congregation, to a question of whether the teaching against ordaining women priests was infallible, Curran said.

The congregation said at that time that the teaching spelled out in Ordinatio Sacerdotalis “requires definitive assent, since, founded on the written word of God, and from the beginning constantly preserved and applied in the tradition of the church, it has been set forth infallibly by the ordinary and universal magisterium.”

“My quick response to that is, it’s a non-infallible statement saying it’s infallible,” said Curran, who has written extensively on issues of church teaching and dissent from them.

Of the original papal statement, he said the idea that it was being presented as infallible teaching “certainly is not conspicuously present there, and if there’s any doubt, it’s not infallible” according to church law.

“Having said that, there’s no doubt that Ratzinger wants to call it infallible -- but he hasn’t crossed the line yet, to do it ‘in an infallible way,’ ” he said.

Sullivan said the doctrinal congregation declaration from 1995 “may account for what Pope Benedict said” in his reported letter to Morris.

Sullivan has long been a prominent critic of what some have called “creeping infallibility” in papal pronouncements, but he was very reserved about whether John Paul’s 1994 declaration on women’s ordination represents an infallible teaching, either from the pope himself or from the universal ordinary teaching of the world’s Catholic bishops.

Referring to the new profession of faith and oath of fidelity established in 1998 by the Vatican, Sullivan said, “After the Nicene Creed that we all say on Sundays, it’s followed by three paragraphs, and the first paragraph treats those matters that have been definitively taught as revealed truth, which must be responded to as a matter of faith. ... But the second paragraph, equally definitive teaching, presents teaching that is not revealed truth and therefore does not call for a response of faith -- even though one has to admit that the original edition of the Catechism of the Catholic Church did, mistakenly, actually say that that kind of doctrine could also be defined as a doctrine of faith.”

When he called Vatican attention to that error, he said, the final official version of the catechism in Latin was corrected accordingly. Sullivan’s point was that definitive teaching may be regarded as infallible, even if it is not taught as divinely revealed truth requiring an assent of faith -- a rather narrow and technical distinction that would probably be lost on most Catholics.

Sullivan said the second paragraph of the new profession of faith and oath of fidelity “deals with doctrine that is not revealed but is so closely connected with revelation that the church needs to be able to speak definitively about it also, even though it’s not revealed truth.”

“Even if the church defines [such truths],” he said, “it does not call for a response of divine faith” but rather “a firm assent of the mind.” He said that is the kind of assent that Benedict seems to have had in mind in the reported letter to Morris.

“I haven’t seen the original papal text [to Morris],” Sullivan said, “and one never knows unless one has seen the original text, but if Pope Benedict did say that Pope John Paul II had taught this doctrine infallibly, I suggest -- I can’t be certain -- that Pope Benedict may be thinking of the fact, which is certain, that in Ordinatio Sacerdotalis Pope John Paul II did call upon the faithful to give their definitive assent to the judgment which he was there proposing, namely that the church has no authority to ordain women to the priesthood.”

Remembering a shepherd on conclave eve