Council of Cardinals to continue Curia review in upcoming meeting 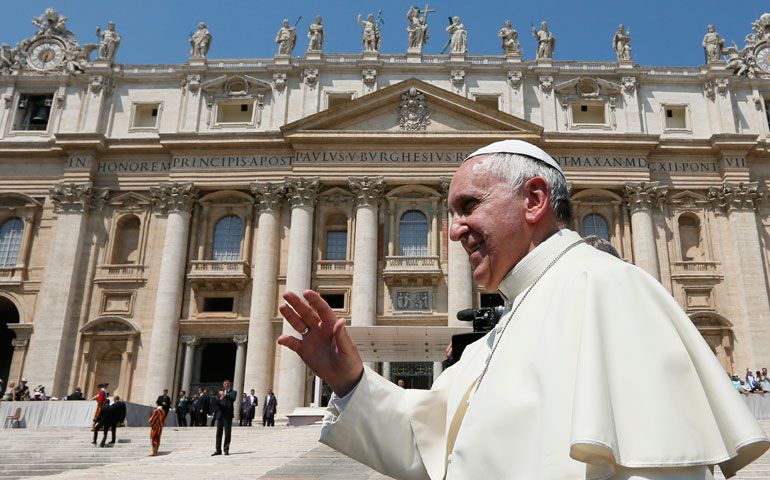 Pope Francis greets the crowd as he leaves his general audience in St. Peter's Square at the Vatican June 11. (CNS/Paul Haring)

The group of eight cardinals advising Pope Francis on reforming the governance of the Catholic church is set to meet with him for the fifth time, presumably to more seriously consider an overall blueprint for a new structure of the Vatican's central bureaucracy.

While the cardinals have not indicated exactly what the group will be focusing on during its July 1-4 meetings, the Vatican signaled in an April statement that the prelates have already finished a review of the Vatican's nine main governmental bodies, known as congregations, and are now proceeding to review its 12 auxiliary bodies, known as councils.

Likewise, unsubstantiated reports in June were speculating that Francis was considering creating several new secretariats to combine similar Vatican departments into one structure for the sake of expediency and effectiveness.

Francis established the advisory group, known formally as the Council of Cardinals, last year to "study a project of revision" of the Vatican's bureaucracy, known as the Roman Curia. The group met together for the first time in October.

Among papal decisions known to be influenced by the cardinals' group in the past year are the establishments of a new Vatican Secretariat for the Economy, headed by council member Australian Cardinal George Pell, and of a new papal advisory commission on clergy sexual abuse, which includes council member Boston Cardinal Sean O'Malley.

While the group's last meeting, held April 28-30, was largely overshadowed by the events leading up to the dual canonizations of Popes John XXIII and John Paul II on April 27, the Vatican issued a brief statement April 29 saying not to expect final results from the cardinals' work until 2015.

"The work to be done is still much, so it should not be expected that it will be completed in the current year, but in the following," the Vatican said in that statement.

For centuries, the only secretariat at the Vatican was the Secretariat of State, which oversaw both the Vatican's general governance and its foreign affairs. Establishment last February of the new economic secretariat, which was given authority over "all the economic and administrative activity within the Holy See and the Vatican City State," broke that precedent.

The new papal commission on sexual abuse currently counts seven other members besides O'Malley in its ranks, including Irish sexual abuse survivor Marie Collins. The group last met May 1-3, following the April Council of Cardinals meeting -- leading to some speculation it might meet again following the cardinals' July meeting.

Aboard the papal plane coming back from his trip to the Holy Land in May, Francis also said he is planning to host his first meeting with sexual abuse survivors sometime this year.

It is unknown when the cardinals' group will next meet at the Vatican following this week's gathering. But it is expected they will come together before the anniversary of their first meeting in October, when many prelates will already be in Rome for the 2014 Synod of Bishops on the church's family pastoral practices.