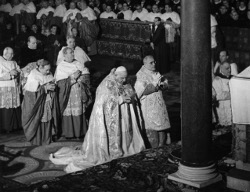 Pope John XXIII prays in the Basilica of St. Paul Outside the Walls on Jan. 25, 1959, just before announcing his plans to convoke the Second Vatican Council. The pope cited a need to update the church and promote Christian unity. (CNS file photo)

This is the first of an occasional series of articles about the Second Vatican Council that will appear this year in NCR leading up to 50th anniversary of the council's opening on Oct. 11, 2012. In October, NCR will publish a special edition devoted solely to the council's 50th anniversary. Read more about it here.

Wednesday, the Catholic church should have celebrated -- but didn't -- an important anniversary, the day 53 years ago when Pope John XXIII invited 18 Curia cardinals to accompany him to a ceremony at St. Paul Outside the Walls. It was the feast day of St. Paul, who is believed to have been executed in Rome about 67 A.D. and buried where the basilica named after him now stands.

It was also the final day of the Octave for Christian Unity, an objective close to the pope's heart. Presumably because of the attendance of so many Vatican higher-ups, the ceremony lasted longer than usual. The result was that the content of the carefully timed announcement the pope made to the cardinals had been released to the media before the cardinals were told.

What they heard stunned them. The new pope -- he had been elected only three months earlier -- told them he intended to summon an ecumenical council and would they please give him their views about it.

One would not need to be in the Vatican very long before knowing what the cardinals would think about an ecumenical council. If they had been asked to vote on it, they might have turned their thumbs firmly down.

Instead, they looked at the pope, first in amazement and then in horror. At any time the Curia has disfavored ecumenical councils. Councils denote change and to the Curia change is anathema. It suggests that the existing situation is not perfect, and to the Curia the church is perfect. A council also suggests the pope needs bishops to advise him. The Curia view, especially since 1870 when papal infallibility was promulgated, is that the pope himself can make any necessary decision, so there is no further need for councils. And any suggestion that people outside the walls of the Vatican needed to be consulted was a slur on the Curia, which liked to regard itself as participating in that creeping papal infallibility.

What mostly astounded the cardinals was that a pope nobody had expected to produce any surprises should make such a major decision. Cardinal Angelo Giuseppe Roncalli was far from being numbered among the papabili, the leading contenders in the conclave of October 1958 to elect a successor to Pius XII. It was only on the third day of the conclave, when the voting became deadlocked, that his name was mentioned. He himself was astonished. He had come to Rome on a return train ticket and with only an overnight bag, expecting to be back in Venice after two days. He didn't expect to be pope. And he didn't want to be.

The cardinals who supported him had voted for a man they considered would be an interim pope, creating no waves in a church recovering from the frenetic pontificate of Pius XII. In his 19 years on the throne of St. Peter, Pius had not thought it necessary to summon an ecumenical council. Why then, thought the cardinals in St. Paul that morning in 1959, did this old man -- he was then 77 -- want to go stirring things up when all they wanted was a few years of peace to let things settle down? No wonder they were speechless as the new man dropped his bombshell.

John claimed later that he had expected that the cardinals, "after hearing our allocution, might have crowded round to express approval and good wishes." Instead, he added, "there was a devout and impressive silence. Explanations came on the following days." This evaluation of the cardinals' reaction is either very charitable or, more likely, a somewhat rueful remark from an old countryman who was nobody's fool.

He maintained this attitude to the end. Nearly three years later, Oct. 11, 1962, when he formally opened the council, he said the decision to call it "came to us in the first instance in a sudden flash of inspiration." And recalling the silent reaction of the cardinals, he added serenely, if implausibly, "The response was immediate. It was as though some ray of supernatural light had entered the minds of all present: It was reflected in their faces; it shone from their eyes."

The accounts of council historians do not support such a benevolent portrayal of the Curia's contribution to the work of the Second Vatican Council. From the start it worked to preempt the council. It proposed 10 commissions, each with 24 members, to run the council and helpfully nominated Curia people to most of the positions. It submitted 70 documents for the council's consideration. And it trusted the council could be completed in one session.

The Curia's preemptory bid to take control of the council in one suave swoop was stopped in its tracks. As soon as it was made, two European cardinals, Achille Liénart of Lille, France, and Josef Frings of Munich, Germany, protested. Bishops from the four corners of the world, 2,500 of them, had come to Rome for the council. They had not had a chance to get to know each other. How could they decide who would be best for what commission? They needed a few days to consider the options.

The council bishops, some of whom had never before been in the overwhelming surroundings of St. Peter's, and most of whom were bewildered by the enormity and complexity of what they were faced with, reacted with delight. The Curia proposals, including the membership of the commissions and the 70 draft decrees were swept aside. The amendment to postpone the opening of the council for two days was carried with a massive majority. The bishops streamed out of St. Peter's to gather outside in the vast piazza in excited knots to discuss what had happened. The first meeting of Vatican II, which was to meet in three-month sessions over the next four years, was finished. It had lasted some 17 minutes.

[Desmond Fisher is a former editor of The Catholic Herald, London, and a former head of current affairs at Radió Telefís Éireann.]

Vatican to care for homeless woman who gave birth outside of St. Peter's