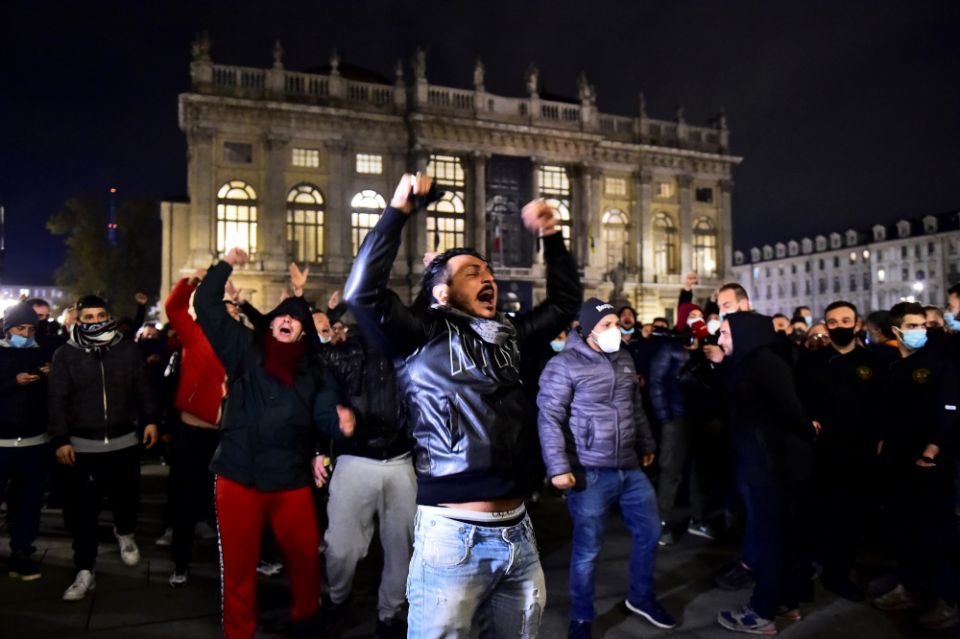 People protest against the new restrictions introduced by the government to curb COVID-19 infections, in Castello Square in Turin, Italy, Oct. 26, 2020. (CNS/Reuters/Massimo Pinca)

Vatican City — Europeans must not see their rich history simply as a fond memory of a time long gone, but they must look to it as a guide to overcoming divisions and challenges aggravated by the COVID-19 pandemic, Pope Francis said.

The letter to Cardinal Pietro Parolin, Vatican secretary of State, was released by the Vatican Oct. 27.

The pandemic, the pope said, "emerged as a kind of watershed" moment when countries can choose either to yield "to the temptation to autonomy," which leads to more disagreement and conflict, or "rediscover the path of fraternity that inspired and guided the founders of modern Europe."

"We have witnessed the temptation to go it alone, seeking unilateral solutions to a problem that transcends state borders," he wrote. "Yet thanks to the great spirit of mediation that distinguishes the European institutions, we have also seen a determination to set out on the path of fraternity, which is also the path of solidarity, unleashing creativity and new initiatives."

In his letter, the pope laid out a vision of a future for a Europe that does not lose its heritage and deeply-rooted ideals in an age of rapid change, which "can bring with it a loss of identity, especially when there is a lack of shared values on which to base society."

"Europe, find yourself!" he wrote. "Be yourself! Do not be afraid of your millenary history, which is a window open to the future more than the past." 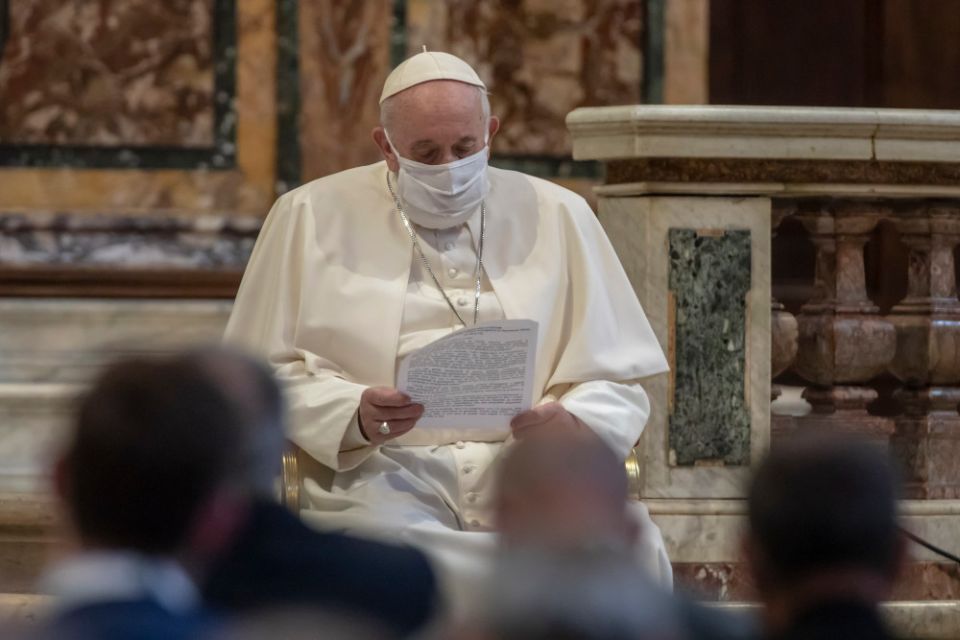 Pope Francis attends a prayer service for peace at the Basilica of Santa Maria in Ara Coeli in Rome in this Oct. 20, 2020, file photo. In an Oct. 27 letter the pope called for European Union countries to resist "the temptation to autonomy" and to "rediscover the path of fraternity" in dealing with the COVID-19 pandemic. (CNS/Pool/Stefano Dal Pozzolo)

The pope said he dreamed of Europe that respects human dignity and where "each person is appreciated for his or her intrinsic worth and not viewed purely from an economic standpoint or as a mere consumer."

He also told Parolin that he hoped a united Europe would always seek the pursuit of the common good and strive to be "a land that protects life at every stage, from the time it arises unseen in the womb until its natural end, since no human being is the master of life, either his or her own life or the lives of others."

To overcome today's challenges, the pope said, the European Union must remain united, otherwise, "a divided Europe, made up of insular and independent realities, will soon prove incapable of facing the challenges of the future."

He also highlighted the need for solidarity which, "as an essential element of every authentic community, demands that we care for one another."

Solidarity, he said, requires caring not only for the vulnerable in one's own country, but also "being a neighbor to others" and being "especially ready and willing, through international cooperation, to offer generous assistance to other continents."

"I think particularly of Africa, where there is a need to resolve ongoing conflicts and to pursue a sustainable human development," he said.

Francis also said he hoped for a "healthy secularism" in Europe, where "God and Caesar remain distinct but not opposed," and where societies are "open to transcendence" so that "believers are free to profess their faith in public and to put forward their own point of view in society."

"The era of confessional conflicts is over, but so too — let us hope — is the age of a certain laicism closed to others and especially to God, for it is evident that a culture or political system that lacks openness to transcendence proves insufficiently respectful of the human person," the pope said.