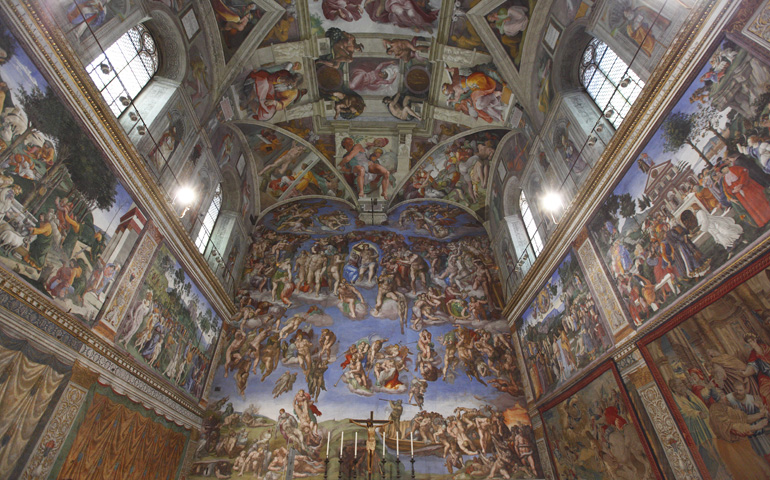 The Sistine Chapel in the Vatican Museums (CNS/Paul Haring)

Despite worries about the impact of millions of tourists on Michelangelo's precious frescoes, the Sistine Chapel is opening its doors for the first time to a new kind of tourist to support Pope Francis' charities.

Porsche enthusiasts will pay 5,000 euros ($6,400) each for a tour in and around Rome that will include an exclusive after-hours concert inside the Sistine Chapel and a dinner in the Vatican Museums on Saturday.

Built by Pope Sixtus IV between 1473 and 1484, the richly decorated chapel has traditionally been used as the pope's private place of prayer and for conclaves, the secretive meetings held by the world's cardinals to elect a new pope.

While the Porsche event is being openly promoted on Porsche's corporate website, the managing director of the Vatican Museums, Msgr. Paolo Nicolini, rejected suggestions the chapel was available for rent.

"The Sistine Chapel can never be rented because it is not a commercial place," he told reporters Thursday.

"Saturday will be the debut of 'Art for Charity,' an initiative to exclusively support the charitable projects of the pope. This initiative is organized directly by the Vatican Museums and is directed at big companies. With the payment of a ticket, they can contribute to financing charity projects."

Nicolini was speaking at a media conference to discuss a dramatic refurbishment of the chapel's air conditioning and lighting system.

Antonio Paolucci, the director of the Vatican Museums, said: "We are going to protect, from a climatological point of view, Michelangelo's greatest masterpiece, as well as giving it proper lighting."

Nearly 6 million people a year visit the chapel, with as many as 20,000 in a single day. Paolucci said this meant "radical intervention" was needed to improve air circulation, while reducing dust, temperatures and humidity.

The U.S.-based Carrier air conditioning company is providing a state-of-the-art heating, ventilating and air-conditioning system for the chapel, specially designed to protect the masterpieces of Michelangelo and other Renaissance artists.

Climate control systems that regulate the temperature and humidity inside the chapel are up to 20 years old, and experts say the world-famous site has become a victim of its own popularity.