Even in Jordan, Christian-Muslim ties not always easy 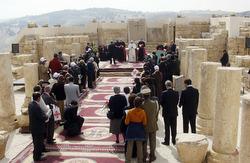 Pope Benedict XVI prays at the ancient Memorial Church of Moses at Mount Nebo in Madaba, Jordan, May 9. Mount Nebo's first church was constructed in the second half of the fourth century to commemorate the place where Moses died. (CNS/Reuters)

Successful PR usually pivots on a simple storyline, and in a sense both the Vatican and the Jordanians are trying to offer just such a storyline during Pope Benedict XVI’s three days in the country: Jordan as a moderate Islamic nation that proves a “clash of civilizations” isn’t inevitable.

Yesterday, for example, Benedict told King Abdullah II that Jordan’s commitment to inter-faith dialogue has confounded “the predictions of those who consider violence and conflict inevitable.”

Talking to ordinary Jordanians, both Muslim and Christian, there seems a fair bit of truth behind this rosy picture. By and large, they say, the country’s Muslim majority and its small Christian minority live in harmony, and the Hashemite monarchy here goes to great lengths to protect Jordan’s image as an open and tolerant place. (For example, eight percent of the seats in Jordan’s parliament are reserved for Christians, even though they represent only about three percent of the population.)

Drilling beneath the surface, however, it’s clear that nothing is ever as simple as it seems.

Yazan Khateeb, for example is a 31-year-old information technology professional in Amman, and a devout Muslim who says he attends his local mosque several times a week. A smiling, affable sort whose family immigrated to Jordan from Palestine in 1948, Khateeb takes pride that his best friend is a Catholic. Through him, Khateeb began volunteering for Caritas, a church-run charitable and social service organization. On the Saturday morning we met, Khateeb was busy making sandwiches for the roughly 500 people from Caritas who will be attending Benedict XVI’s Mass in Amman’s International Stadium tomorrow morning – a Mass that Khateeb himself also plans to attend.

“I hear about conflict between Muslims and Christians on the news, but I don’t see it in my daily life,” Khateeb said. He estimated that “extremist” Muslims in Jordan who might have theological or political axes to grind with the pope or with Christianity represent “a small group, no more than twenty percent.”

Yet ask Khateeb how he would react if his Muslim sister wanted to marry a Christian man, and the picture changes slightly.

“I would have a problem with it,” he said. He quickly added that it’s not because he objects to Christianity, but because he knows how people would react. Family members would be angry, neighbors would gossip, and life in general would be difficult for his sister.

In a similar vein, Khateeb also said that any Muslim in Jordan who might want to convert to Christianity would run into “real problems.” When asked how many of his Muslim friends would agree with Benedict XVI that religious freedom is a fundamental right – which implies that a Muslim ought to be free to convert, his blunt answer was “no one.”

Obviously struggling to reconcile his tolerant outlook with his fidelity to what he considers God’s law, Khateeb suggested that maybe a Muslim wishing to convert should do so “privately.”

Hanan Jarrar, a 52-year-old Muslim physician who arrived in Jordan with her Palestinian family at the time of the 1967 war, is also a volunteer with Caritas who proudly says that sometimes she’ll attend Mass with her Catholic friends. She, too, is planning to go the papal Mass in Amman tomorrow.

“We all follow the same God. We’re all believers,” she said, summing up her philosophy about Christian-Muslim relations.

Jarrar said that in her view, the real issue with religious freedom in Jordan isn’t so much any restrictions faced by Christians, but those faced by Muslim women. Jarrar her devout Muslim father grudgingly allowed her to study in Cuba during the 1970s, allowing her to pursue a medical career. But, she said, she was lucky, and that many women living in Arab societies aren’t so fortunate.

In fact, she said, it’s easier to be a Christian man than a Muslim woman in her society.

“There are many traditions and limits on women,” she said. “Often there’s pressure to wear the veil, to not go out after dark, but also obstacles in terms of work and education.”

Yet Elzham Hijazeen, a Latin rite Catholic and mother of four who works as an office cleaner in Amman, said that while the religious divide is not especially tense in Jordan, it’s also never far from the surface.

“At my work, my Muslim friends often try to convince me to become a Muslim,” she said. “Sometimes they’re just joking, but sometimes they’re serious. Anyway, it’s always there.”

Asked what would happen if one of her Muslim friends instead wanted to become a Christian, she said simply, “they would kill him,” referring to that person’s Muslim family and friends.

Yet talking to Hijazeen, it also seemed clear that cultural and historical forces can play as much of a role in shaping these tensions as religion. For example, Hijazeen said she would “never” want to see one of her Catholic daughters marry a Muslim man – a point of view, she acknowledged, which has more to do with how she was raised than anything she learned from the catechism.

“Our family wouldn’t accept it,” she said. “Christians don’t like it [inter-marriage] any more than Muslims do.”

At the end of the day, however, Hijazeen expressed a conviction that seems widely shared in Jordan – that whatever problems may arise from religious diversity should not spill over into violence.

“God does not want one person to kill another because of religion,” she said.

By fostering that perspective on a wide scale, Jordan does represent a remarkable model for Christian-Muslim relations – even if, in real life, the picture is inevitably more complex.

Vatican | Even in Jordan, Christian-Muslim ties not always easy

Pope's quotes: We are so busy