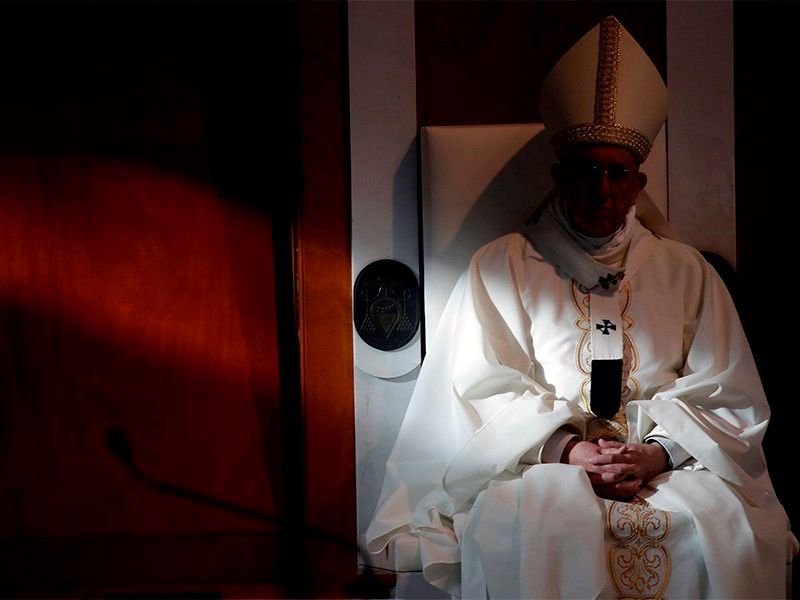 Pope Francis sits as he celebrates Mass in the parish church of San Paolo della Croce, in the Corviale neighborhood of Rome, on April 15, 2018. (AP/Alessandra Tarantino)

Vatican City — The tables have turned under Pope Francis. And a new type of Catholic has formed: the conservative dissenter.

In the past, conservatives prided themselves on loyalty to the pope and being in lockstep with all papal teachings, while progressives called for limits to papal power.

The devotees of tradition used to argue that liberals who complained about papal infallibility or centralization were backsliders who really needed to get with the program.

So while the John Paul II and Benedict XVI papacies had liberal theologians arguing that popes should govern more collaboratively, traditionalist critics of the current pope "have become reluctant to accept papal teaching (in its contents and forms) only with Francis," said Villanova University theology professor Massimo Faggioli.

In the recently published book "To Change the Church," Ross Douthat compares Francis to President Trump, arguing the pope is seeking to push through changes without thinking about the consequences.

"The story could end with Francis as its hero," the New York Times columnist writes. "But to choose a path that might have only two destinations — hero or heretic — is an act of great and dangerous presumption, even for a pope. Especially for a pope."

The desire for a pope to govern in an autocratic way as long as it suits one's agenda points to a much bigger debate about how much authority Catholic teaching gives to the man known as the Successor of St. Peter.

That gives the pope a pretty free rein.

At the same time, there are safeguards around papal power. Catholic tradition makes clear that pontiffs must govern the church with the bishops – a principle known as collegiality — while papal infallibility is strictly defined.

Constraining papal power has been on the mind of Cardinal Raymond Burke, a respected canon lawyer and leading light for traditional Catholics.

On April 7, he gave a long speech titled "The limits of papal authority in the doctrine of the Church" to a gathering in Rome largely made up of Francis critics. The cardinal has threatened to publicly correct the pope over a footnote in his 2016 apostolic exhortation, "Amoris Laetitia," that envisions a way for some divorced and remarried Catholics to receive Communion.

"Any expression of doctrine or practice that is not in conformity with divine revelation, contained in the sacred scriptures and in the tradition of the church, cannot be an authentic exercise of the apostolic or Petrine ministry and must be rejected by the faithful," the cardinal said.

Quoting a church lawyer from the 12th century, the 69-year-old prelate said that while "no mortal being" should have the "audacity to reprimand a pope on account of his faults," a pontiff must be called out if he has "deviated from the faith."

There are even times, Burke added, citing a historian of the late medieval period, when a pope "must, as a duty, be disobeyed."

Francis, on the other hand, has talked about the importance of receiving criticism. Four days after the cardinal's speech, the 81-year-old Argentine pontiff offered one of the most dramatic "I'm sorry" statements ever seen by a pope, over his mishandling of the Chilean sexual abuse scandal. The Catholic news site Crux described what Francis did as "institutionalizing the tradition of personal papal apologies."

Admitting mistakes is one of the ways Francis is reforming the papacy, moving it away from a monarchical model — where popes could never be wrong — to a servant leader approach. He's also argued it's not the pope's job to settle all "doctrinal, moral or pastoral issues."

This infuriates his critics. Burke and his followers believe a pope must give clear-cut doctrine and they are deeply worried about Francis' happiness with ambiguity.

But the problem for the cardinal's argument is who decides when a pope has erred. This has been a matter of debate inside the church for centuries and at times has led to bitter disputes.

Competing claims to the papal throne after the 14th-century "Avignon Papacy," when seven successive popes resided in France, were resolved by the church agreeing that decisions by councils had greater power than that of a pope. Later it was decided the best way to guarantee unity was a strong papacy and it was the First Vatican Council (1869-70) that made the famous declaration of papal infallibility (which is only valid in matters of faith and morals). The Second Vatican Council of 1962-65 sought to balance papal authority with a collegial system of governance and that's something Francis is trying to maintain.

Faggioli says the tradition of the Catholic Church in defining papal authority is "conservative," in the sense of being cautious.

"The extremist interpretations of papal primacy and infallibility have been rejected both by Vatican I and the post-Vatican I Church," he said. "It is healthy that Catholics see limits in papal powers."

One thing is certain, criticism of Francis is not going away. On Saturday (April 21), the Cathedral Basilica of Sts. Peter and Paul in Philadelphia will host Burke for a conference titled "Matrimony: Rediscovering its Truth."

The decision to host the cardinal is significant given that the archbishop of Philadelphia, Charles Chaput, leads the United States bishops' committee on "laity, marriage, family life and youth," which has a remit to implement the teachings in "Amoris Laetitia."

The Archdiocese of Philadelphia did not respond to requests for comment about Burke's attendance at the cathedral event or whether this meant the archbishop was endorsing the cardinal's position.

For his part, Chaput has issued guidelines to his archdiocese on "Amoris Laetitia" stressing that remarried Catholics can only receive Communion if they are living as "brother and sister," and he recently described Douthat's book as an "intelligent and absorbing work."

And while his cathedral is hosting a cardinal who is threatening to correct the pope, the archbishop steered clear of a conference on Francis' papacy that took place near Philadelphia at Villanova University on April 12-15 and brought together some of Francis' closest confidants and advisers. The pope himself met with the university's president and trustees in the Vatican while the Villanova conference was in full swing.

Finding themselves criticizing a pope may, in the long run, see conservatives end up with a more nuanced and balanced view of papal authority. In the meantime, liberal Catholics could offer them a simple message: "Welcome to the club."

Vatican | Francis agrees with his critics: A pope can be wrong

Your thoughts on ideology infecting theology and impending schisms