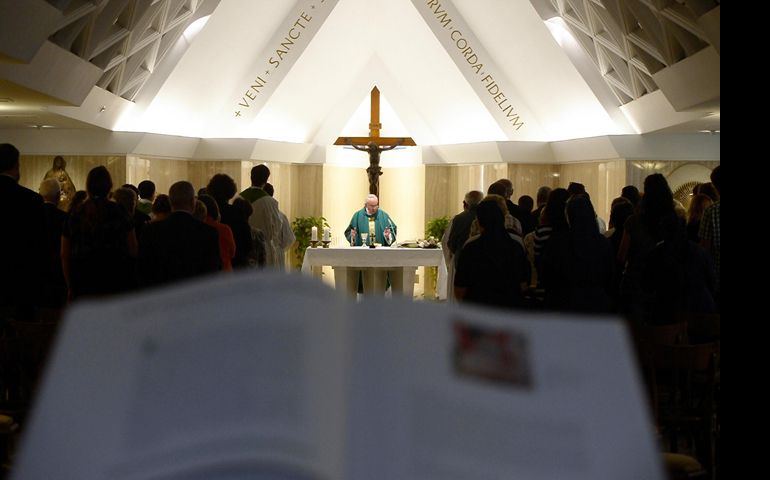 Pope Francis celebrates Mass at his residence, the Domus Sanctae Marthae, at the Vatican Sept. 1. (CNS/ L'Osservatore Romano via EPA)
This article appears in the Holy Year of Mercy feature series. View the full series.

The pontiff has also said that he will allow all priests around the world to absolve women who confess to having had abortions, an ability normally reserved only to bishops.

And in a striking move for church unity in expressing God's mercy, the pope has even granted priests of the schismatic and traditionalist Society of St. Pius X faculties to offer absolution of sins "validly and licitly" to those who approach them for confession.

Francis made the announcement of the new indulgences and abilities in a letter sent Tuesday to the president of the Pontifical Council for the Promotion of the New Evangelization, which is organizing the holy year on his behalf.

The letter, published by the Vatican in seven languages, is striking for the global scope the pontiff envisions the Jubilee year taking, with availability for pardon and mercy seemingly available to all.

It also addresses women who have had abortion in a respectful way, blaming abortion not so much on them but on "a widespread and insensitive mentality has led to the loss of the proper personal and social sensitivity to welcome new life."

Regarding the Society of St. Pius X, a traditionalist sect of priests and bishops who widely reject the changes of the Second Vatican Council, the letter says bluntly: "This Jubilee Year of Mercy excludes no one."

"I trust that in the near future solutions may be found to recover full communion with the priests and superiors of the Fraternity," states Francis.

"In the meantime, motivated by the need to respond to the good of these faithful, through my own disposition, I establish that those who during the Holy Year of Mercy approach these priests of the Fraternity of St Pius X to celebrate the Sacrament of Reconciliation shall validly and licitly receive the absolution of their sins," he continues.

On abortion, Francis calls it a "tragedy" that is "experienced by some with a superficial awareness, as if not realizing the extreme harm that such an act entails."

"Many others," he writes, "on the other hand, although experiencing this moment as a defeat, believe that they have no other option."

"I think in particular of all the women who have resorted to abortion," states the pope. "I am well aware of the pressure that has led them to this decision. I know that it is an existential and moral ordeal. I have met so many women who bear in their heart the scar of this agonizing and painful decision."

"The forgiveness of God cannot be denied to one who has repented, especially when that person approaches the Sacrament of Confession with a sincere heart in order to obtain reconciliation with the Father," he continues.

"For this reason too, I have decided, notwithstanding anything to the contrary, to concede to all priests for the Jubilee Year the discretion to absolve of the sin of abortion those who have procured it and who, with contrite heart, seek forgiveness for it," writes Francis.

"May priests fulfill this great task by expressing words of genuine welcome combined with a reflection that explains the gravity of the sin committed, besides indicating a path of authentic conversion by which to obtain the true and generous forgiveness of the Father who renews all with his presence," he asks.

Francis opens his letter to Archbishop Rino Fisichella by saying that he wants the holy year to be "for all believers a true moment of encounter with the mercy of God." He then offers an indulgence, or remission of the punishment for sin, for those that during the year are able to make a pilgrimage to the papal basilicas in Rome or to their local cathedral.

As is traditional, those making those pilgrimages will be asked to make confession, celebrate the Mass, and pray for the pope's intentions.

But the pope then extends the possibility of indulgence in a special way to those that are sick or imprisoned.

For sick or elderly persons unable to travel, he says: "Living with faith and joyful hope this moment of trial, receiving communion or attending Holy Mass and community prayer, even through the various means of communication, will be for them the means of obtaining the Jubilee Indulgence."

For those in prison, he states: "The Jubilee Year has always constituted an opportunity for great amnesty, which is intended to include the many people who, despite deserving punishment, have become conscious of the injustice they worked and sincerely wish to re-enter society and make their honest contribution to it."

"May they all be touched in a tangible way by the mercy of the Father who wants to be close to those who have the greatest need of his forgiveness," writes the pope. "They may obtain the Indulgence in the chapels of the prisons."

The pontiff also extends the possibility for forgiveness of sin to anyone who performs one of the traditional spiritual or corporal works of mercy during the year.

"I have asked the Church in this Jubilee Year to rediscover the richness encompassed by the spiritual and corporal works of mercy," he writes.

"The experience of mercy, indeed, becomes visible in the witness of concrete signs as Jesus himself taught us," states the pope. "Each time that one of the faithful personally performs one or more of these actions, he or she shall surely obtain the Jubilee Indulgence."

Francis has called the special Jubilee year for mercy to begin this Dec. 8, the feast of the Immaculate Conception and the 50th anniversary of the closing of the Second Vatican Council. It will close on Nov. 20, 2016, the day celebrated that year as the feast of Christ the King.

In his official proclamation of the year, released in April, the pontiff powerfully called on the entire Catholic church to refashion itself as a place not of judgment or condemnation but of pardon and merciful love.

Granting of special indulgences for the remission of sins during Catholic holy years is a traditional practice, but in the past normally required a visit to one or more of the papal basilicas in Rome. Francis' letter Tuesday greatly expands the availability of the practice.

The Society of St. Pius X was founded by the late French Archbishop Marcel Lefebvre in 1970 as a response to objections he and others had to the reforms of the Council.

Pope Benedict XVI had sought to repair relations with the group, lifting the excommunications of four of their bishops in 2009. Those efforts ultimately failed when the group's current superior general, Bishop Bernard Fellay, rejected a doctrinal statement drafted by the Vatican for the group to sign.

Members of the schismatic group are considered not to be in full communion with Rome, and, in normal circumstances, its priests and bishops cannot exercise Roman Catholic ministry.

Pope: the Devil behind timing of sex abuse crisis