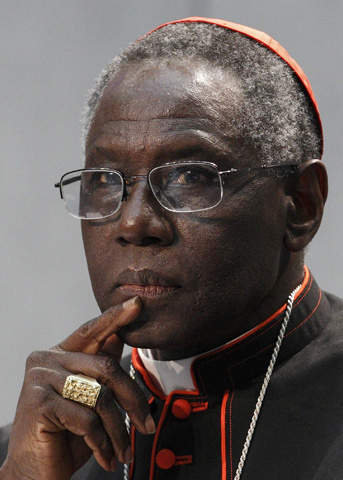 Pope Francis has appointed Guinean Cardinal Robert Sarah as the new head for the Vatican congregation that oversees and determines liturgical practices for the global Catholic church.

The appointment, made Sunday but announced by the Vatican on Monday, fills what had been an unusually long vacancy among the Vatican's highest offices and elevates Sarah to the most senior African in the church's governance.

It also will likely be subject to much analysis and speculation, as the post in recent years has been the topic of much discussion among Catholics about how the church celebrates liturgy in the wake of the changes of the Second Vatican Council (1962-65).

Until Sunday, Sarah had been the president of the Pontifical Council Cor Unum, which is tasked with undertaking humanitarian relief and charity in the name of the Vatican and the pope.

Sarah, 69, succeeds Spanish Cardinal Antonio Cañizares Llovera, who led the congregation from December 2008 until August, when the pope appointed him as the new archbishop of Valencia.

Sarah is the second African to hold the post, following Cardinal Francis Arinze, who led the congregation from 2002 to 2008.

The liturgical congregation has come into the spotlight in recent years in the U.S. for the role it played in pushing for new translations of the English texts of the Catholic celebration of the Mass.

Following the congregation's work, new English-language texts went into use in the U.S. in fall 2011.

Sarah, who had served as the Cor Unum president since 2010, previously served as a secretary for the Vatican's Congregation for the Evangelization of Peoples from 2001 to 2010.

Before his Vatican work, Sarah had served for more than two decades (from 1979 to 2001) as the archbishop of the coastal Guinean archdiocese of Conakry.

During his time in Conakry, Sarah served at different points as president of the Guinean bishops' conference and the Episcopal Conference of West Africa.

The Guinean prelate was critical of last month's Synod of Bishops on family life, saying that the church was being pressured by media groups to change certain pastoral teachings, particularly regarding same-sex unions.

"What has been published by the media about homosexual unions is an attempt to push the Church [to change] her doctrine," Sarah told Catholic News Agency.

"The Church has never judged homosexual persons, but homosexual behavior and homosexual unions are grave deviations of sexuality," the cardinal, who participated in the synod as the president of Cor Unum, continued.

Among his public appointments last month, Sarah also spoke to an annual pilgrimage of Latin Mass enthusiasts in Rome, known as the Summorum Pontificum pilgrimage for the 2007 document by Pope Benedict XVI that allowed for wider celebration of the Latin Mass.

Until Sarah's appointment Sunday, the most senior African at the Vatican had been Cardinal Peter Turkson, a Ghanaian who is the president of the Pontifical Council for Justice and Peace.

The Vatican's release Monday announcing Sarah's appointment to the liturgical congregation did not say who would be taking his post at Cor Unum. But as Francis is known to be undertaking a reform of the Vatican's bureaucracy, it remains unclear if the organization of certain Vatican offices may be changed.

A version of this story appeared in the Dec 5-18, 2014 print issue under the headline: Francis appoints Guinean to lead liturgical congregation.