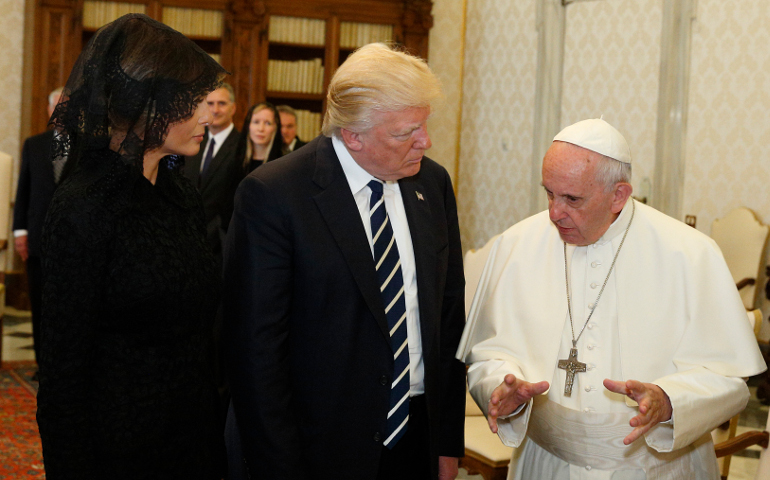 Pope Francis talks with U.S. President Donald Trump, accompanied by his wife, Melania, left, during a private audience at the Vatican May 24. (CNS photo/Paul Haring)

Pope Francis met Wednesday morning with U.S. President Donald Trump, speaking privately in the apostolic palace with him for about 30 minutes and asking later that he work for peace in the world.

The atmosphere for the first encounter between the two world leaders, known to disagree on a range of issues, appeared at the beginning to be stiff and formal. As the pope greeted the president in the antechamber of the papal library, where they held their private meeting, he kept a straight face and did not smile.

Following their discussions, however, Francis took more of a jovial tone. As the door to the library opened and he was introduced to First Lady Melania Trump, he shook her hand gently, looked at the president, and joked: “What do you give him to eat?”

During the traditional exchange of gifts, Francis gave Trump a large medallion he has given to many world leaders that depicts an olive tree holding together two pieces of a fractured rock, telling the president: “I am giving you this because I hope you may be this olive tree to make peace.”

Trump responded: “We can use peace.”

The pope also gave the president four of his writings: The two apostolic exhortations Evangelii Gaudium and Amoris Laetitia, the environmental encyclical Laudato Si’, and his message for 2017’s World Day of Peace.

Francis told Trump he had personally signed for him the gifted copy of the peace message, which focuses on nonviolence as a political strategy. Referring to the documents, Trump responded, “Well, I’ll be reading them.”

At the end of the meeting, the president told the pope: "Thank you, I won't forget what you said." Francis responded in Spanish: "Buena suerte," or, "Good luck."

The May 24 encounter has been one of the most anticipated between a pope and a head of state in recent history. Trump and Francis are known to disagree on a number of issues, such as on protection of the environment and how immigrants should be treated.

Their disagreement on the latter issue famously caused a few days of high tension in 2016, when Francis questioned Trump's Christianity over his support for a wall on the U.S.-Mexico border and Trump called the pope's remark about him "disgraceful."

In a statement following Francis and Trump’s meeting May 24, the Vatican described their conversation as “cordial” and said “satisfaction was expressed for the good existing bilateral relations between the Holy See and the United States of America.”

“It is hoped that there may be serene collaboration between the State and the Catholic Church in the United States, engaged in service to the people in the fields of healthcare, education and assistance to immigrants,” the statement continued.

It is unknown exactly what Francis and Trump said to one another during the private portion of their meeting. Besides a Vatican translator, the two leaders were the only people present in the room.

Thirty minutes is a normal length of time for a meeting between the pope and a head of state.

While Francis spent about 52 minutes in a meeting with former President Barack Obama in March 2014, the pope’s time was also constrained as he went directly from meeting with Trump to his weekly general audience in St. Peter’s Square.

As the two shook hands, the president thanked the pope for having the meeting. They then walked into the library together, pausing for photos before sitting down. Trump smiled broadly as the camera shutters clicked but Francis kept a straight face and looked to the floor at points.

They then sat across a wooden desk from each other, the pope leaning forward in his chair. The president told the pope it was “a very great honor” to meet him. The Vatican cut the live video feed of the meeting at 8:32 am to let the leaders speak in private.

The video feed came back on at 9:02 a.m. as Francis greeted the first lady, Ivanka Trump, and Jared Kushner. The pope then greeted the other members of the U.S. delegation, which included Secretary of State Rex Tillerson and National Security Advisor General H.R. McMaster.

During the gift exchange, Trump presented Francis with a large black box that contained a set of the writings of the Rev. Martin Luther King, Jr., who the pope had cited in his address to Congress during his visit to the U.S. in 2015. “This is a gift for you,” said the president as he presented the box. “I think you’ll enjoy them. I hope you do.”

Beyond being one of the most anticipated visits by a head of state, Francis' encounter with Trump was also considered by some Vatican officials as among the most possibly perilous for the pope.

In the run-up to the event, a few of the city-state's diplomatic officials had quietly expressed concern to some reporters about whether Trump might describe in public what he and the pope had discussed in private, or even say something disparaging about the pope on Twitter.

About mid-day May 24 in Rome, Trump tweeted that meeting the pope had been the "honor of a lifetime." The president also changed the background picture of his Twitter profile to an image of him and Francis meeting.

Following the meeting with Francis, Trump then met with Vatican Secretary of State Cardinal Pietro Parolin and his deputy Archbishop Paul Gallagher. The Vatican said that meeting, which was also private, lasted about 50 minutes.

Tillerson told reporters later in the afternoon that Parolin spoke to Trump and the U.S. officials about climate change.

“The cardinal was expressing their view that they think it’s an important issue,” said the Secretary of State. “I think they were encouraging continued participation in the Paris accord. But we had a good exchange (on) the difficulty of balancing addressing climate change, responses to climate change, and ensuring that you still have a thriving economy."

Before leaving the Vatican, Trump, the first lady, and daughter Ivanka then visited the Sistine Chapel and St. Peter's Basilica.

Later in the morning, Melania Trump headed to visit the Bambino Gesu children’s hospital, owned by the Vatican and located in just a short walk from the city-state on Rome’s Gianicolo hill.

Ivanka Trump headed to Rome’s Trastevere neighborhood for a visit with the Community of Sant’Egidio, a Catholic lay association that wields significant political influence in Italy and is favored by Francis particularly for its work with migrants.

One project the group has been undertaking lately is called “Humanitarian corridors,” which raises funds to allow refugees escaping war and famine to enter Europe. The group says that between February 2016 and March 2017 it was able to help about 700 Syrians escaping that country’s ongoing civil war.

The president had separate meetings with Italian President Sergio Mattarella and Prime Minister Paolo Gentiloni. In response to questions from reporters during the meeting with Gentiloni, Trump called Francis "something" and said he and the pope had a "fantastic" encounter.

Trump arrived in Rome May 23 after visiting Saudi Arabia and Israel. He heads to Brussels late May 24 where he will meet Belgium’s King Philippe upon arrival and take part in meetings with NATO and European Union leaders May 25.

The president will head back to Italy May 26 for a summit of G7 leaders, taking place in Sicily.

Francis was not the only one at the Vatican in a joking mood. As he was escorting Trump through the apostolic palace to his meeting with the pope, Archbishop Georg Ganswein, the prefect of the papal household, quipped to the president at one point that the building was similar to Trump Tower in New York.

A version of this story appeared in the June 2-15, 2017 print issue under the headline: Trump tells pope: 'I won't forget what you said'.