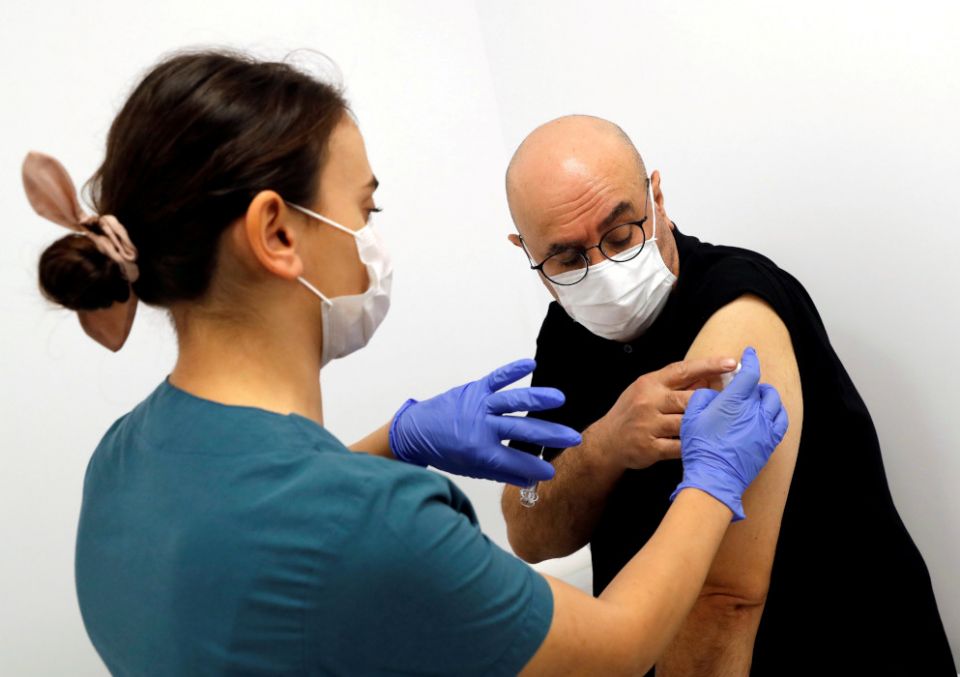 A health worker injects a volunteer with an experimental COVID-19 vaccine during Phase III trials in late September at a hospital in Kocaeli, Turkey. In an interview with a Spanish magazine, Pope Francis said a potential vaccine for COVID-19 belongs to all of humanity and must not "be the property of the country of the laboratory that discovered it or of a group of countries that were allied for this." (CNS/Reuters/Murad Sezer)

Vatican City — An eventual vaccine for COVID-19 would belong to the world and should not be hoarded greedily by countries hosting the lab or labs that develop it, Pope Francis said.

"The [coronavirus] vaccine cannot be the property of the country of the laboratory that discovered it or of a group of countries that were allied for this," he said. "If this were so, we would not have learned anything from so much suffering," the pope said in an interview with the Spanish edition of the magazine Il Mio Papa (My Pope) published Oct. 7.

Vatican News, as well as the Spanish newspaper ABC, published excerpts of the interview.

"The vaccine is the patrimony of humanity, of all humanity, it is universal; because the health of our peoples, as the pandemic has taught us, is a common heritage, it belongs to the common good," he said.

As of Oct. 7, more than 7.8 million people worldwide have been infected, according to Worldometer, a statistical site monitoring the pandemic. As a result, countries around the world have been racing to discover a vaccine for the disease, which had claimed the lives of more than 1 million people by early October.

The pope told "Il Mio Papa" that hearing about the "sometimes inhuman way" many victims died, alone and with no loved ones at their side, "was very painful."

Amid that sorrow, however, there were also stories of compassion, particularly those involving nurses who helped elderly victims contact their loved ones before their death, he noted.

"This gesture by people who are used to living with pain and suffering, and yet manage to relieve it and help, tells us that there is still a lot of greatness among us," the pope said.

While many continue to reel from the "loneliness of sorrow," he continued, the only way to confront it is through closeness, and not through words which "aren't needed" and may even hurt those who mourn.

"It is the time of silence, of closeness and doing everything possible to be together — as much as one can with all the necessary precautions — but accompanying each other, crying together, giving each other time to mourn," he said.

The pope also praised an initiative by the Spanish bishops' conference to celebrate a memorial Mass for the victims of COVID-19 and said that, "as a community and a society, we need to weep together for our loved ones and unite in sorrow and shared prayer." 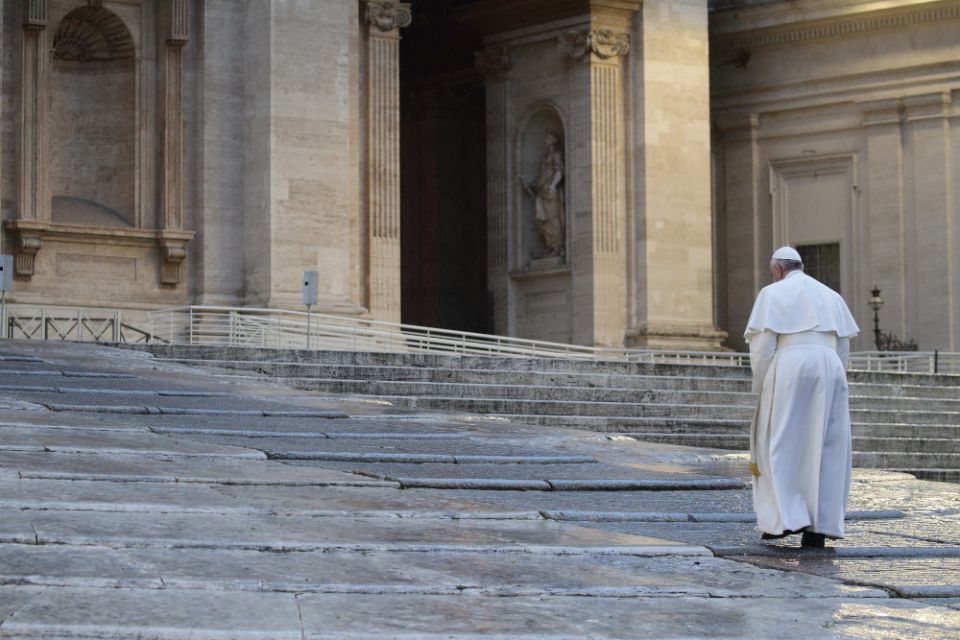 Pope Francis walks up stairs as he arrives for a prayer service in an empty St. Peter's Square at the Vatican March 27, 2020. In an interview, the pope said he was afraid of slipping as he walked up steps to St. Peter's Basilica during the March 27 service, which was livestreamed at the height of Italy's battle with the coronavirus pandemic. (CNS/Pool/Evandro Inetti)

"This is the moment to confront together the sorrow of so many families who in one day lost their father, their mother, a brother or sister," he said.

The pope was also asked what he felt like during his March 27 prayer service when he prayed, almost alone in the rain, for an end to the pandemic.

Admitting that he was afraid of slipping while walking up the steps toward St. Peter's Basilica, the pope said his heart "was with all the people of God who suffered, with a humanity that had to withstand this pandemic and that, on the other hand, needed the courage to continue walking."

"I walked up those steps praying; I prayed the entire time and I left praying," he said. "That is I how lived through March 27."

When asked to predict what a post-pandemic world would look like, the pope said that it is still uncertain whether "we will come out better or worse," but it depends "on the decisions that we make during the crisis."

Paraphrasing a quote from Protestant theologian Dietrich Bonhoeffer, the pope said that "the problem is not how we figure out how to get out of this problem, but rather what way of life we will leave to the future generation."

"If at this moment, we only think about how to fix our situation and look to 'zafar,' ['to get by'], as we say in Argentina, then we are centered only on ourselves, humanly barren because we do not know how to commit ourselves to the fruitfulness of the future," the pope said.

"We must be responsible for the future, for preparing the land for others to work," Francis said. "And this is the culture we must develop in the pandemic, according to this great principle that no one is the same after a crisis. We either come out worse or better; but never the same."

Vatican | Eventual coronavirus vaccine should belong to everyone, pope says