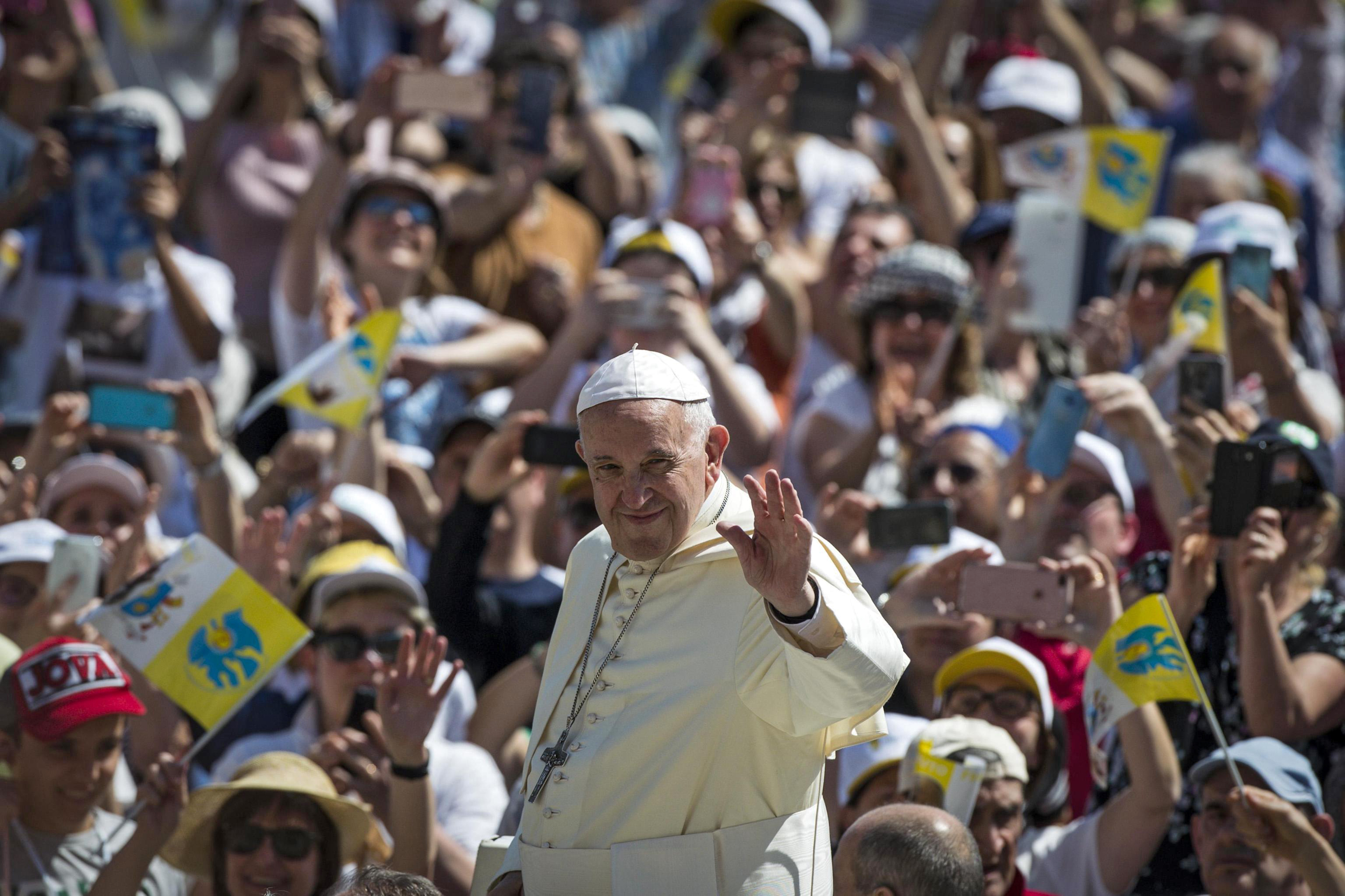 Pope Francis arrives for an audience with faithful from the Italian dioceses of Bologna and Cesena in St. Peter's Square at the Vatican April 21. (CNS/Angelo Carconi, EPA)

The sacrament of baptism isn't a good luck charm but a gift from God that enables Christians to overcome evil, Pope Francis said.

Those who receive the sacrament are given the strength to overcome "the temptation to separate from God, from his will, from communion with him [and] fall into the snares of worldly seductions," the pope said April 25 during his weekly general audience.

"Baptism is not a magic spell but a gift of the Holy Spirit that allows those who receive it to fight against the spirit of evil, believing that God sent his son into the world to destroy the power of Satan and bring men and women from the darkness to his kingdom of infinite light," he said.

Thousands of pilgrims gathered in St. Peter's Square for the general audience despite the day being a national holiday commemorating Italy's liberation from Nazi occupation.

Francis, however, chose to reflect on the spiritual liberation from evil offered to men and women who receive the sacrament of baptism.

Continuing his series of Easter-season talks on baptism, the pope said that the litany of the saints and the prayers of exorcism that are part of the baptismal rite are gestures meant to reassure catechumens "that the prayer of the church assists them in the fight against evil and accompanies them on the path of good."

"At the baptismal font, no one ever goes alone, but is accompanied by the prayer of the whole church," the pope said.

Another important and symbolic gesture, he explained, is anointing with oil the chest of the person about to be baptized.

Like the ancient gladiators who used oil to tone their muscles and slip through the clutches of their adversary, Christians are anointed as a sign of Christ's power "that strengthens us to fight against evil and overcome it," the pope said.

Although the fight against evil is a "lifelong struggle," he said, Christians can rest assured that the church "prays so that her children do not succumb to the snares of evil."

"Strengthened by the risen Christ, who conquered the prince of this world, we too can say with faith like St. Paul: 'I can do all things through him who gives me strength,'" the pope said.