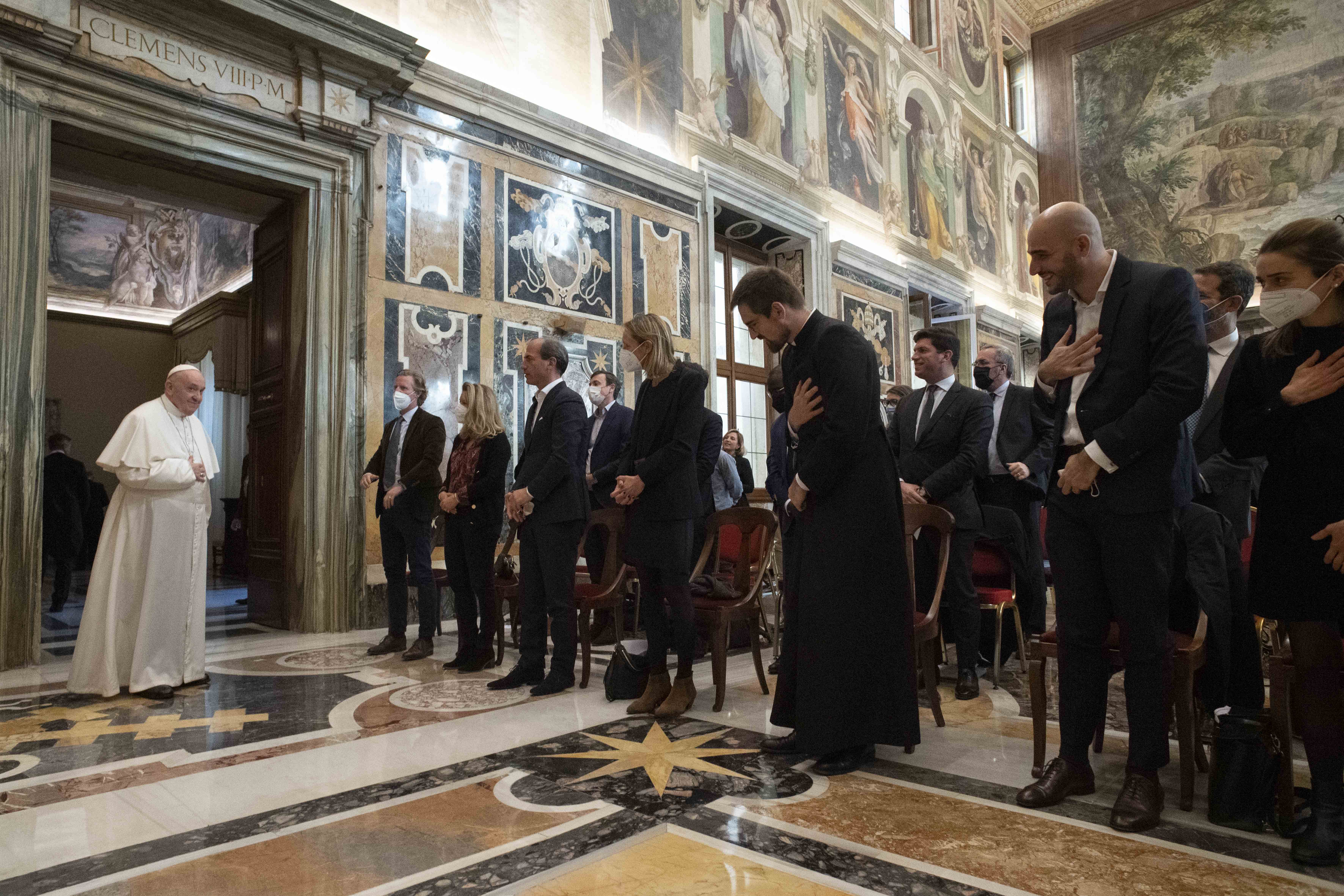 Pope Francis leads a meeting with a group of 90 business leaders from France at the Vatican Jan. 7, 2022. (CNS photo/Vatican Media)

Competition, the market system and need to answer to stockholders can and do challenge business owners and leaders who want to put the needs of employees and the common good first, Pope Francis said.

"Persevere and don't be discouraged," the pope told 90 business leaders from France Jan. 7. Accompanied by Bishop Dominique Rey of Fréjus-Toulon, the leaders were making a pilgrimage to Rome.

"I find it very beautiful and courageous that, in a world often marked by individualism, indifference and even the marginalization of the most vulnerable, some entrepreneurs and business leaders have at heart the service of all and not just the service of private interests or restricted groups," the pope said. "I have no doubt that this represents a challenge for you."

The pope said the clash between ideals and reality, which he spoke about Jan. 1 on the feast of Mary, Mother of God, also is at play in the lives of business leaders who want to operate "according to the heart of God," but find themselves having to deal with "the economic and financial systems currently in place, which often make a mockery of the Gospel principles of social justice and charity."

When that happens, he said, the leaders must not "try to camouflage" the fact, but they must bring it to their prayer, which is the best place "to unify the beautiful and the ugly things of which life is made up, to grasp better the interweaving and the meaning in God's perspective."

Pope Francis also told the business leaders that what he has told pastors about "smelling like the sheep" applies to them as well and involves knowing their employees, their talents, dreams and struggles.

And, he said, the best exercise of authority is to share it when possible, recognizing and encouraging every employee to contribute what he or she can to the business.

"The Christian manager is called to consider carefully the place assigned to all the people in his or her company, including those whose duties might seem of lesser importance, because each is important in God's eyes," he said. Even if being the boss sometimes means making tough decisions, there should be a general approach of allowing "each person to give the best of himself or herself, to feel that he or she is participating, to bear his or her share of responsibility and thus contribute to the good of the whole."