Pope to grandparents, all elderly people: 'You are needed' 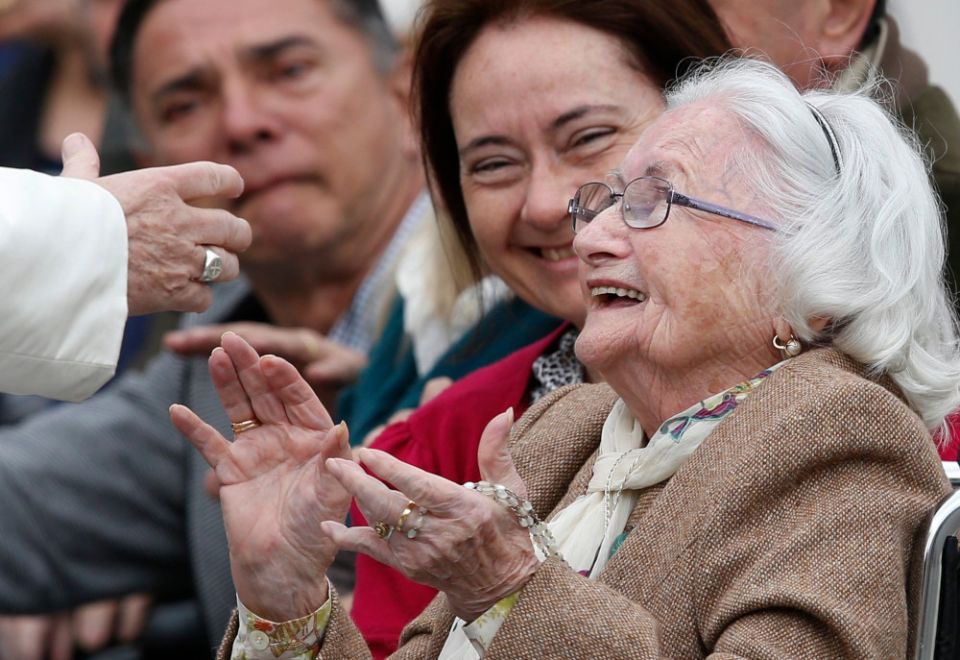 An elderly woman reacts as she meets Pope Francis during his general audience in St. Peter's Square at the Vatican in this March 22, 2017, file photo. The pope has chosen the theme "I am with you always," for the first World Day for Grandparents and the Elderly, to be celebrated July 25. (CNS/Paul Haring)

Vatican City — Writing to his peers, Catholics who have reached a venerable age like he has, Pope Francis told older Catholics that God is close to them and still has plans for their lives.

"I was called to become the bishop of Rome when I had reached, so to speak, retirement age, and thought I would not be doing anything new," said the pope, who is 84 now and was elected when he was 76.

"The Lord is always — always — close to us. He is close to us with new possibilities, new ideas, new consolations, but always close to us. You know that the Lord is eternal; he never, ever goes into retirement," the pope wrote in his message for the Catholic Church's first celebration of the World Day for Grandparents and the Elderly.

The message was released at the Vatican June 22 in anticipation of the celebration July 25, the Sunday closest to the feast of Sts. Joachim and Anne, Jesus' grandparents.

The Vatican also announced that people who attend a Mass or other celebration for the day, "devote adequate time to actually or virtually visiting their elderly brothers and sisters in need or in difficulty" or join in prayers for the elderly July 25 can receive a plenary indulgence as long as they fulfill the usual requirements of also going to confession, receiving the Eucharist and praying for the intentions of the pope.

The indulgence also is available to "the elderly sick and all those who, unable to leave their homes for a serious reason, will unite themselves spiritually to the sacred functions of the world day, offering to the merciful God their prayers, pains or sufferings of their lives," the Vatican said.

Francis' message, which was distributed in writing and on video, acknowledged how much many older people around the world suffered and continue to suffer physically, emotionally and spiritually because of the COVID-19 pandemic.

But he also insisted that the Christian call to share the Gospel is as pertinent now for all of them as it ever was.

"Think about it: what is our vocation today, at our age? To preserve our roots, to pass on the faith to the young and to care for the little ones," he wrote. "Never forget this."

"It makes no difference how old you are, whether you still work or not, whether you are alone or have a family, whether you became a grandmother or grandfather at a young age or later, whether you are still independent or need assistance," he said. "There is no retirement age from the work of proclaiming the Gospel and handing down traditions to your grandchildren. You just need to set out and undertake something new." 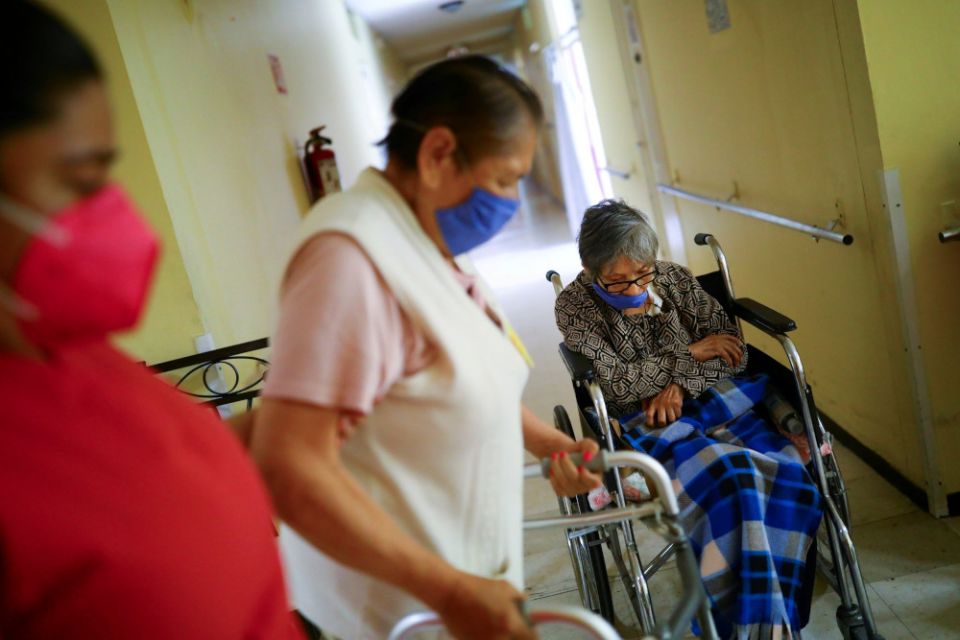 An elderly person waits to receive the Pfizer-BioNTech COVID-19 vaccine at Casa Betti nursing home during the coronavirus pandemic in Mexico City March 11, 2021. Pope Francis has chosen the theme "I am with you always," for the first World Day for Grandparents and the Elderly, to be celebrated July 25. (CNS/Reuters/Edgard Garrido)

Francis said he knew many older people might wonder how they could be called to something new when their "energy is running out" or they cannot even leave the residence where they live. They may even ask, "Isn't my solitude already a sufficiently heavy burden?"

"You are needed in order to help build, in fraternity and social friendship, the world of tomorrow: the world in which we, together with our children and grandchildren, will live once the storm has subsided," the pope insisted.

A better future, he said, must be built on the pillars of "dreams, memory and prayer," pillars that "even the frailest among us" can help erect with God's help.

While it is true that the energy and enthusiasm of the young is needed to help set the global society on a new path, "our dreams of justice, of peace, of solidarity can make it possible for our young people to have new visions," the pope wrote. "You need to show that it is possible to emerge renewed from an experience of hardship. I am sure that you have had more than one such experience: in your life you have faced any number of troubles and yet were able to pull through. Use those experiences to learn how to pull through now."

While many people, young and old, act as if the reminiscences of the elderly are boring, Pope Francis said that "without memory, however, we will never be able to build; without a foundation, we can never build a house. Never. And the foundation of life is memory."

As examples, the pope cited the experience many older people have had of war or of needing to emigrate.

Sharing "the painful memory of war," he said, is important "for helping the young to learn the value of peace."

"I also think of my own grandparents, and those among you who had to emigrate and know how hard it is to leave everything behind, as so many people continue to do today, in hope of a future," he said. "Some of those people may even now be at our side, caring for us. These kinds of memory can help to build a more humane and welcoming world."

Turning to the importance of prayer, Francis cited "my predecessor, Pope Benedict, himself a saintly elderly person who continues to pray and work for the church" at the age of 94.

"The prayer of the elderly can protect the world, helping it perhaps more effectively than the frenetic activity of many others," the pope quoted his predecessor as saying. "He spoke those words in 2012, toward the end of his pontificate. There is something beautiful here."

"Your prayer is a very precious resource: a deep breath that the church and the world urgently need," Francis told the elderly. "Especially in these difficult times for our human family, as we continue to sail in the same boat across the stormy sea of the pandemic, your intercession for the world and for the church has great value: it inspires in everyone the serene trust that we will soon come to shore."

Vatican | Pope to grandparents, all elderly people: 'You are needed'

Pope calls for new alliance between young, old to change the world