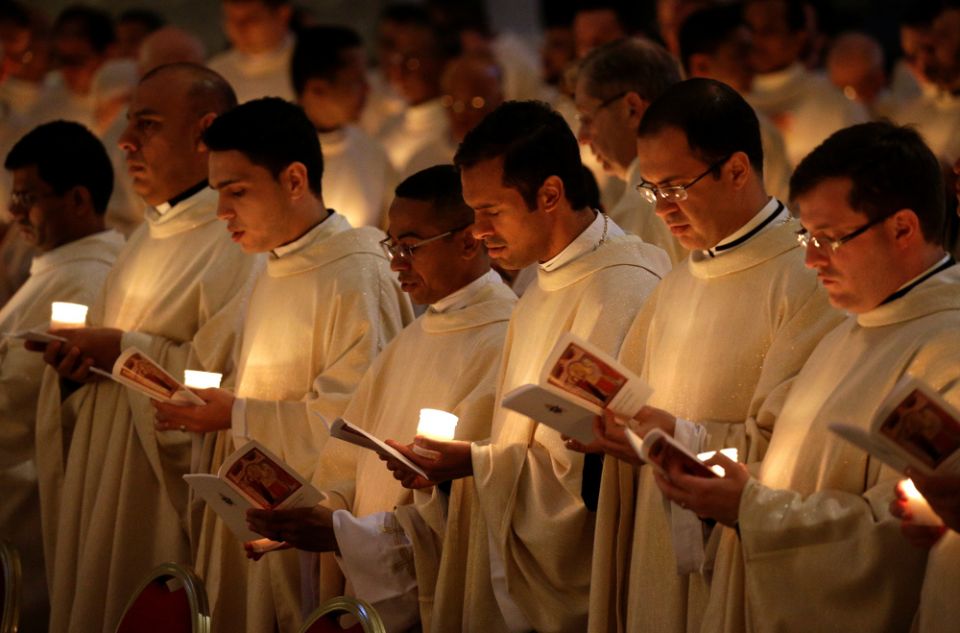 Priests hold candles as they wait for Pope Francis to arrive for Mass with consecrated women and men marking the feast of the Presentation of the Lord and the World Day for Consecrated Life in St. Peter's Basilica at the Vatican Feb. 2. (CNS/Max Rossi, Reuters)

Vatican City — Lift up your eyes from your smartphones and see your brothers and sisters, those who share your journey of faith and those who are longing for the Word of life, Pope Francis told consecrated men and women.

"Today's frantic pace leads us to close many doors to encounter, often for fear of others," the pope said in his homily for the feast of the Presentation of the Lord and the World Day for Consecrated Life. "Only shopping malls and internet connections are always open."

Yet believers' hearts must be open as well, because every believer receives the faith from someone and is called to share it with others, the pope said at the Mass Feb. 2 in St. Peter's Basilica.

The feast day commemorates the 40th day after Jesus' birth when, in accordance with ancient Jewish practice, Mary and Joseph took him to the temple and presented him to the Lord. The feast's Gospel reading from St. Luke recounts how the aged Simeon and Anna, who were praying in the temple, recognized Jesus as the Messiah.

The Mass, attended by thousands of women and men belonging to religious orders, began with the traditional blessing of candles and a prayer that God would guide people toward his son, "the light that has no end."

In his homily, Pope Francis focused on a series of encounters: between people and Jesus; between the young Mary and Joseph and the elderly Simeon and Anna; and between individuals and members of their religious communities or their neighborhoods.

"In the Christian East," the pope explained, "this feast is called the 'feast of Encounter': It is the encounter between God, who became a child to bring newness to our world, and an expectant humanity."

The pope, himself a Jesuit, told the religious that their own journeys were "born of an encounter and a call" which, while highly personal, took place in the context of a family, a parish or a community.

Members of religious orders must realize that they need each other — young and old — to renew and strengthen their knowledge of the Lord, he said. They must never "toss aside" the elderly members because "if the young are called to open new doors, the elderly have the keys."

One's brothers or sisters in the community are a gift to be cherished, he said before adding a plea: "May we never look at the screen of our cellphone more than the eyes of our brothers or sisters, or focus more on our software than on the Lord."

Pope Francis said strengthening the intergenerational bonds in a religious community also is an antidote to "the barren rhetoric of 'the good old days' " and the only way "to silence those who believe that 'everything is going wrong here.' "

Religious life, with its vows of poverty, chastity and obedience, always has been countercultural, he said. And yet it is the source of true freedom because while "the life of this world pursues selfish pleasures and desires, the consecrated life frees our affections of every possession in order fully to love God and other people."

Vatican | Pope to religious: Your hearts must be open 24-7

It takes more than one 'Our Father' to ask for God's help, pope says