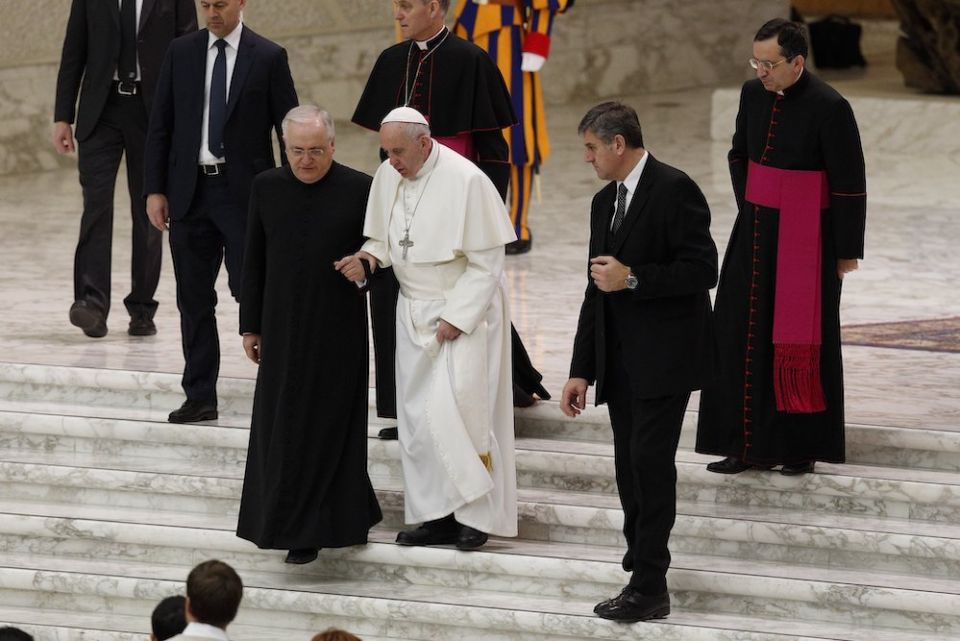 Pope Francis is assisted by Fr. Leonardo Sapienza, an official of the Prefecture of the Papal Household, as he walks down stairs during his general audience in Paul VI hall at the Vatican Jan. 18, 2017. Recurring bouts of sciatica, a painful back ailment, often mean the pope needs assistance walking up and down steps. (CNS/Paul Haring)

Vatican City — Pope Francis will not preside over the traditional end-of-the-year prayer service nor the New Year's Mass in St. Peter's Basilica due to "painful sciatica," the Vatican said.

In a statement published Dec. 31, Vatican spokesman Matteo Bruni said that instead, Cardinal Giovanni Batista Re, dean of the College of Cardinals, will preside over the evening prayer and the singing of the "Te Deum" to thank God for the year that is ending.

Cardinal Pietro Parolin, Vatican secretary of state, will preside over the Jan. 1 Mass for the feast of Mary, Mother of God, and World Peace Day at the Altar of the Chair in St. Peter's Basilica, he said.

However, Bruni confirmed that "Pope Francis will still lead the recitation of the Angelus from the library of the Apostolic Palace, as scheduled" Jan. 1.

The pope has suffered for several years from sciatica which, according to the Mayo Clinic, can cause sharp pain that radiates along the path of the sciatic nerve, which branches from the lower back through the hips and down each leg.

Francis has spoken in the past about the physical pain he suffers due to the condition.

Speaking to journalists during his return flight from Rio de Janeiro, Brazil, in July 2013, the pope described an attack of sciatica he suffered during the first month of his papacy as "the worst thing that happened."

"Sciatica is very painful, very painful! I don't wish it on anyone!" he told the reporters.

Then in the summer of 2017, the Catholic magazine Famiglia Cristiana reported that the pope's personal doctor recommended he receive regular massages and injections twice a week to reduce the pain caused by the condition.

Francis celebrated his 84th birthday Dec. 17 and has rarely canceled or missed events due to health.

Before Italy's nationwide COVID-19 lockdown in March, Francis was suffering from what the Vatican said was a normal cold. He canceled a Mass Feb. 27 with priests of the Diocese of Rome and postponed other large public events and large-group meetings. However, he kept other commitments, meeting and shaking hands with people at smaller meetings throughout the day and weekend.

On March 1, the pope told pilgrims gathered for his Sunday Angelus that with the cold persisting he would be unable to attend the annual Lenten retreat March 1-6 with Curia officials.