Use Gospel as a guide, not an ideology, pope tells Claretian Missionaries 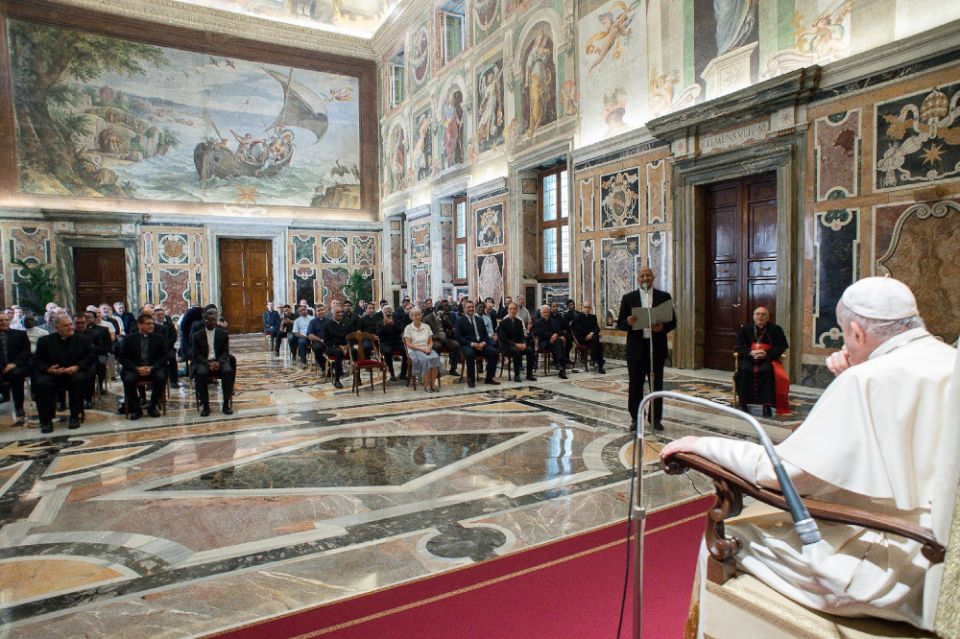 Vatican City — The Gospel should never be used as a means to an end, wielded like an ideology, Pope Francis told representatives of the Claretian Missionaries.

They should use the Gospel like a "handbook" — "a vademecum, letting yourselves be guided every moment by the options of the Gospel and by the ardent desire to follow Jesus" and imitate him in prayer, working and suffering, striving single-mindedly for the glory of God and the salvation of souls, he said, making reference to the writings of St. Anthony Mary Claret, the missionaries' 19th-century founder.

The pope made his remarks during an audience at the Vatican Sept. 9 with Claretian Missionaries attending their general chapter in the Italian town of Nemi, 19 miles south of Rome. During the chapter, which opened Aug. 15, the congregation's delegates reelected Claretian Fr. Mathew Vattamattam to another term as superior general. Cardinal Aquilino Bocos Merino, a former superior general, also was present at the audience.

In his talk to the Claretians, Francis said they must never separate their mission from contemplation and an ever-growing intimacy with Jesus.

They must not be afraid of "wasting time" in silent prayer and adoration before the Lord, he said. Boredom and busy schedules can never come in the way of encountering God's gaze, he added.

But, they must also go out into the world, going where nobody wants to go, where the light of the Gospel is needed and work side by side with the people, he said.

Their mission can never be done "remotely" by "looking out the window, observing out of curiosity from far away," he said. "We can look at reality from a window or we can commit ourselves to changing it," by transforming the world and by fighting to protect human dignity and respect basic human rights.

If missionaries are not aware of their weaknesses or fragility and they always try to be invincible, like "Tarzan of the apostolate," then it will never be possible that God reveals his power, the pope said.

The pope said that if they let themselves "burn" with God's love and rely on God as their only source of certainty, they will be men of hope and have nothing to fear.

What they should be afraid of, he said, is developing "spiritual schizophrenia" — a worldly kind of spirituality where they depend solely on the strength of their "horses" and "carriages" in an obsessive search for well-being and power.

Jesus is the one who guides their life and missionary choices, he said.

Never exploit or use the Gospel as an instrument, "like an ideology," he said, but as a handbook whose Gospel values show the way.

Vatican | Use Gospel as a guide, not an ideology, pope tells Claretian Missionaries