Francis: Church not about historic buildings, but personal calling 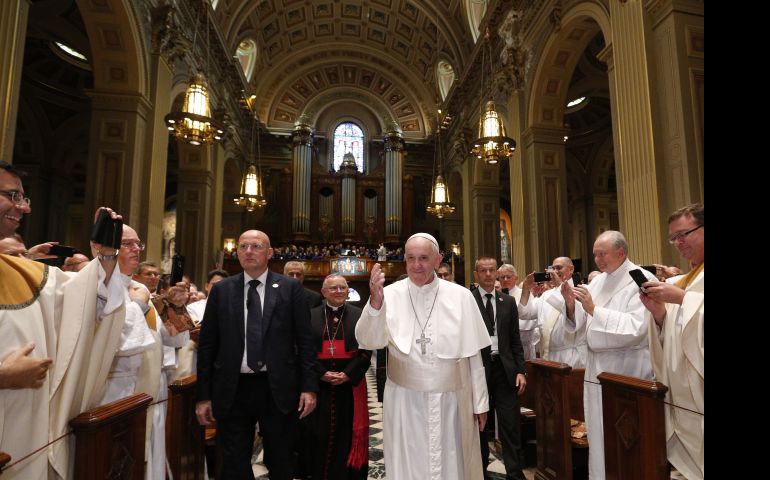 Pope Francis arrives to celebrate Mass with representatives from the Archdiocese of Philadelphia at the Cathedral Basilica of SS. Peter and Paul in Philadelphia Sept. 26. (CNS/Paul Haring)
This article appears in the Francis in the United States feature series. View the full series.

Philadelphia — Fostering the church's evangelical mission is not about trying to hold onto large church buildings of past centuries but rather hearing a personal call to go forth and show concern for others, Pope Francis said at a Mass Saturday for Pennsylvania's bishops, priests and religious.

In his first public event after arriving in Philadelphia from New York, the pontiff gave a brief outline of his vision of evangelization.

"The history of the church in this city and state is really a story not about building walls, but about breaking them down," said the pope, speaking during a homily at the Cathedral of Sts. Peter and Paul, a historic center for institutional Catholicism in the U.S.

"It is a story about generation after generation of committed Catholics going out to the peripheries, and building communities of worship, education, charity and service to the larger society," he said.

The pontiff focused his remarks on the story of Katharine Drexel, a 19th- and 20th-century Pennsylvanian who was declared a saint of the church in 2000.

Explaining how Drexel once met Pope Leo XIII to try and encourage the famous pontiff to make a special push for mission work, Francis said Leo turned to Drexel and asked: "What about you? What are you going to do?"

"Those words changed Katharine’s life, because they reminded her that, in the end, every Christian man and woman, by virtue of baptism, has received a mission," said Francis. "Each one of us has to respond, as best we can, to the Lord’s call to build up his body, the church."

"One of the great challenges facing the church in this generation is to foster in all the faithful a sense of personal responsibility for the church’s mission, and to enable them to fulfill that responsibility as missionary disciples, as a leaven of the Gospel in our world," said the pope.

"This will require creativity in adapting to changed situations, carrying forward the legacy of the past not primarily by maintaining our structures and institutions ... but above all by being open to the possibilities which the Spirit opens up to us and communicating the joy of the Gospel, daily and in every season of our life," he said.

Francis was speaking Saturday just after arriving in Philadelphia, where he is staying through Sunday. Later in the day, the pope will head to the historic Independence Hall for a speech to focus on issues of religious liberty.

The pope's emphasis on not relying on the church's institutional strength has special meaning in Philadelphia, where the church is dealing with smaller numbers and influence after decades of outsized growth.

The pontiff was welcomed into the cathedral before Mass Saturday by a children's choir and was greeted by former Pennsylvania Gov. Tom Corbett. Among those present for the occasion were 219 lay representatives of the area's parishes, many Pennsylvania bishops, and men and women religious.

Security precautions in Philadelphia have been extraordinary, with officials essentially shutting down the downtown area of the city to prevent any possible issues. Cars have been banned from city streets, forcing people to walk for a several mile radius around the papal events.

All who approach the area are also being forced to go through airport-style security checkpoints, with baggage checks and a ban on bringing in water or other liquids. Uniformed military and police are also lining the streets.

In his homily Saturday, Francis said Drexel's story has a special significance for young people.

"How many young people in our parishes and schools have the same high ideals, generosity of spirit, and love for Christ and the church?" he asked, referring to Drexel's desire for mission work.

"Do we challenge them?" he asked. "Do we make space for them and help them to do their part? To find ways of sharing their enthusiasm and gifts with our communities, above all in works of mercy and concern for others? Do we share our own joy and enthusiasm in serving the Lord?"

The pope also said that the changing nature of evangelical requires "a much more active engagement on the part of the laity."

The challenge for the church today, he said, is to build on its solid foundations and "foster a sense of collaboration and shared responsibility in planning for the future of our parishes and institutions."

"This does not mean relinquishing the spiritual authority with which we have been entrusted; rather, it means discerning and employing wisely the manifold gifts that the Spirit pours out upon the church," he said.

"In a particular way, it means valuing the immense contribution which women, lay and religious, have made and continue to make, to the life of our communities," he continued.

Vatican | Francis: Church not about historic buildings, but personal calling

Church must reach out to gays, divorced, Philippine bishop says