Francis: Families should be given work, healthcare 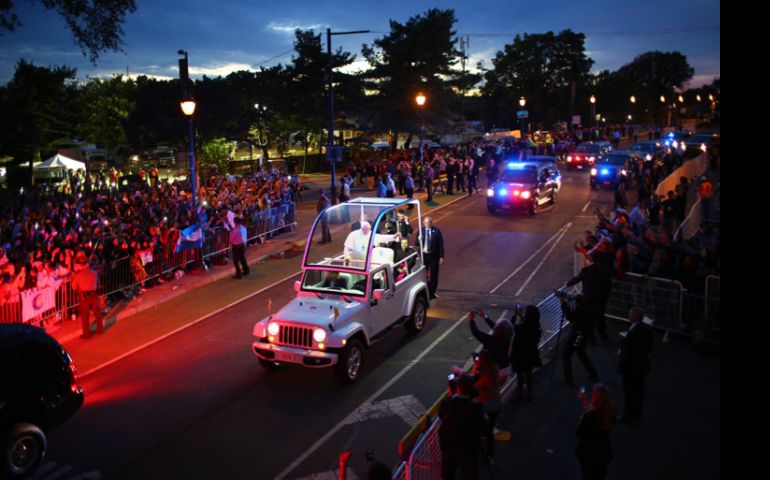 Pope Francis waves to crowds along Benjamin Franklin Parkway as he arrives for the Festival of Families for the World Meeting of Families in Philadelphia Sept. 26. (CNS photo/Eric Thayer, pool)
This article appears in the Francis in the United States feature series. View the full series.

Philadelphia — In an only-in-America star-studded concert-as-prayer revival that shut down the iconic Benjamin Franklin Parkway Saturday evening, Sept. 26, Pope Francis asked families to give special care to children and grandparents.

Children, the pontiff told a crowd on at least tens of thousands, are the future. Grandparents, he said, carry the "memory of the past."

At the conclusion of an event that saw performances by Aretha Franklin, rock band The Fray and others, Francis spoke impassionately off the cuff for about 20-minutes. He repeated themes he has often addressed about family life.

But in his undelivered prepared remarks for the event, the pope cries out for work opportunities and health insurance for families that have been left without life's basic essentials.

Identifying them as families without employment or long-term housing or health insurance, the pontiff calls on families to "help one another to make it possible to 'stake everything on love.'"

"Let us help one another at times of difficulty and lighten each other’s burdens," the pope says in the remarks, prepared for an event called the Festival of Families. "Let us support one another. Let us be families that are a support for other families."

Speaking of families who do not have work, Francis says they face a "true cross."

"How many sacrifices they make to earn their daily bread!" he states. "It is understandable that, when these parents return home, they are so weary that they cannot give their best to their children."

"We cannot think that a society has a future when it fails to pass laws capable of protecting families and ensuring their basic needs, especially those of families just starting out," wrote the pope.

"How many problems would be solved if our societies protected families and provided households, especially those of recently married couples, with the possibility of dignified work, housing and healthcare services to accompany them throughout life," he says.

The festival was held Saturday evening as one of the concluding events for the World Meeting of Families, a Vatican-sponsored event that is hosted in a different global city every three years. Philadelphia has been hosting this year's meeting since Tuesday.

Francis is in Philadelphia for the last stop on his six-day, three-city tour of the U.S. He leaves for Rome on Sunday.

Saturday's event was part-concert, part-dance celebration, and part prayer service. Between prayers by Francis and testimonies from families, there were performances by the various musical acts. Actor Mark Wahlberg played the part of the host, introducing the different groups.

The pope focused his prepared remarks on the fact that God chose to reveal himself to humanity as part of a family.

"God does not dream by himself, he tries to do everything 'with us,' " says the pontiff. "His dream constantly comes true in the dreams of many couples who work to make their life that of a family."

Trying to give encouragement to families that face many day-to-day struggles, Francis states simply: "Perfect families do not exist."

"Love is born and constantly develops amid lights and shadows," he says. "Love can flourish in men and women who try not to make conflict the last word, but rather a new opportunity."

[Joshua J. McElwee is an NCR Vatican correspondent. His email address is jmcelwee@ncronline.org. Follow him on Twitter @joshjmac.]

Vatican | Francis: Families should be given work, healthcare