by John Garvey
Vatican
This article appears in the Francis at Five Years feature series. View the full series. 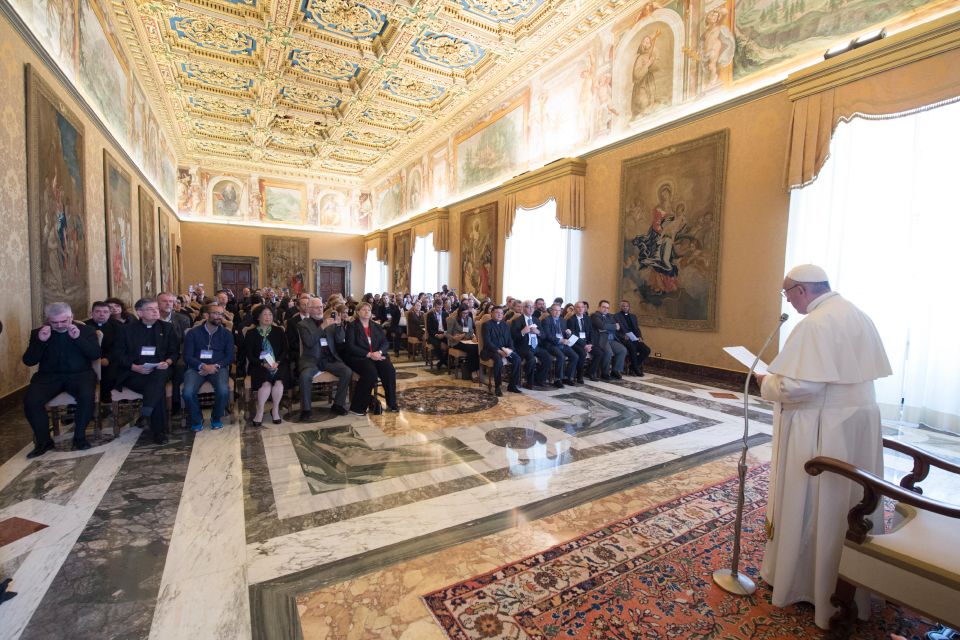 Pope Francis speaks during an audience with members of the International Federation of Catholic Universities at the Vatican on Nov. 4, 2017. The pope encouraged Catholic universities to study the root causes of migration. (CNS photo/L'Ossservatore Romano)

Ten years ago this spring, Pope Benedict XVI gave an inspiring talk to university presidents at The Catholic University of America. I had thought the anniversary of his resignation in February might be a fitting occasion to say something about the place of faith in higher education, and the university in the life of the church.

After all, the pope emeritus was a professor at Bonn, Münster, Tübingen, and Regensburg and a founder of the theological journal Communio. It has been a long time since such a learned man sat in the see of Peter.

And yet, as I reread Benedict's address and thought about the changes we have seen at my own university, it occurred to me that the more significant anniversary might be that of his successor, who was elected five years ago on March 13. Pope Francis has had a profound impact on the work we do at Catholic University. It's entirely consonant with the thought of his predecessor. But like the second movement of a Mozart symphony, it's a different key and tempo from the first.

But faith is not the only virtue a Catholic university should cultivate. We want our students to practice charity and rejoice in hope. We want them to be prudent, just, brave and temperate. Why the constant obsession with faith?

I think there are two reasons. One is that faith has a kind of logical priority among the theological virtues. We must believe in God in order to hope for life with him. And we must believe and hope before we can desire God — what Francis de Sales calls l'amour d'espérance.

The other is that we academics like to suppose that wisdom is one with virtue. Plato makes this argument in the Protagoras — that if we know the good we will do it. If he's right, then we should focus all our efforts on knowing, and the rest will follow. Hence the stress on faith and reason.

Every parent realizes, though, that we don't teach our children virtue by giving them theological tracts. We show them and encourage them to imitate us. And when they do undertake their studies, their prior grounding in virtue informs their understanding. Plato's brightest student understood this point. Aristotle says, in the Nicomachean Ethics, that if a person wants to listen intelligently to lectures on ethics, he "must have been brought up in good habits." In our efforts to know the good, "virtue makes us aim at the right mark, and practical wisdom makes us take the right means."

This is the theme that Francis' pontificate has introduced into university affairs. The practice of virtue — not just faith, but all the virtues — steers the academic enterprise in the right direction.

Consider this observation in Amoris Laetitia, on the better education of children: "The strengthening of the will and the repetition of specific actions are the building blocks of moral conduct; without the … repetition of certain patterns of good behavior, moral education does not take place."

The idea that virtue leads the intellect (and not the other way around) has a bearing on the kind of work we do and the way we do it. Francis has spoken frequently about the care of migrants and refugees — in his recent message on the World Day of Peace, in his speech to Congress in 2015, in his homily at Lampedusa in 2013. He personally directs a small, action-oriented Vatican office called the Migrants & Refugees Section. Jesuit Father Michael Czerny, the undersecretary of that office, in an interview with Aleteia, said the Holy Father wants universities "to fulfill their vocation in all its fullness. That means investigation and teaching, but also social involvement."

We see a similar message in the pope's writings about environmental concerns. Francis graduated with a título in chemistry and worked as a chemist before entering the seminary. "Laudato Sí', On Care for Our Common Home" ends with a reflection on ecological education and spirituality. It complains that environmental education "is at times limited to providing information, and fails to instill good habits." We can't achieve long-lasting effects without both, for "[o]nly by cultivating sound virtues will people be able to make a selfless ecological commitment."

Our work at universities, put most appealingly, is to bring our students to love and to live the gospel. In this regard, our vocation is like that of other Christians. We just have a different way of doing it. But in his apostolic exhortation Evangelii Gaudium (The Joy of the Gospel), Francis makes a point that applies to us all. He says that in the work of evangelization there is a constant tension between ideas and realities. "It is dangerous," he argues, "to dwell in the realm of words alone, of images and rhetoric." We must, as Jesus did, make the word incarnate, "put the word into practice … perform works of justice and charity which make that word fruitful."

This does not mean that universities should abandon biology labs and the study of English literature for service learning and marches on Washington (or Austin or Madison). We would disserve our students if we failed to teach them that serious scholarship demands a lot of solitude and hard work. But it does mean that the work of the academy is not an intellectual game we play for the amusement of the university community.

Speaking about theologians he admires —Benedict XVI and Cardinal Walter Kasper — Francis has said that theology is something we should do on our knees. Theologians should not forget that they are trying to understand the word of God. Success is not an endowed chair or a book award from the American Academy of Religion. It is bringing teachers and students closer to God.

The same goes for sociology, biology, law and business. Doing those things on our knees means approaching our studies with the conviction that the earth and all its creatures speak of God's love. And living our lives outside the classroom as though we believed what we preached.

[John Garvey is president of The Catholic University of America.]