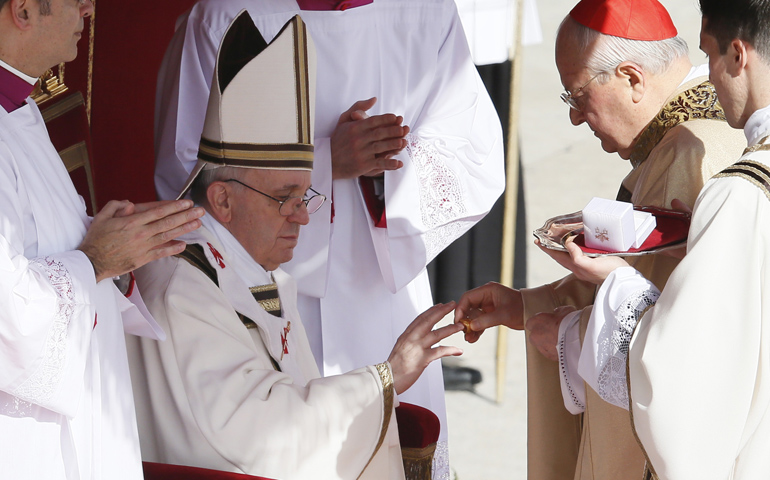 Pope Francis receives his ring from Cardinal Angelo Sodano, dean of the College of Cardinals, on Tuesday during his inaugural Mass in St. Peter's Square at the Vatican. (CNS/Paul Haring)

Among a crowd of an estimated 200,000 people gathered from around the world, Pope Francis on Tuesday inaugurated the beginning of his ministry with a meditation on the model of St. Joseph and the power -- and limits -- of the papacy.

Standing behind a lectern from a raised red carpet platform and looking out from St. Peter's Basilica for the homily during the Mass, Francis acknowledged he is the 265th successor of Peter, which he said "involves a certain power" given by Christ to Peter.

"But what sort of power was it?" the new pope asked, looking up from his prepared remarks at the crowd in front of him.

"Let us never forget that authentic power is service," Francis continued after a pause. "The pope, too, when exercising power, must enter ever more fully into that service, which has its radiant culmination on the cross."

The pope, Francis continued, "must be inspired by the lowly, concrete and faithful service which marked St. Joseph."

"Like him, he must open his arms to protect all of God's people and embrace with tender affection the whole of humanity, especially the poorest, the weakest, the least important," he said. "Only those who serve with love are able to protect."

The last line referred to St. Joseph, whose feast day is Tuesday and whom the pope continually referred to as a "protector," both of the Holy Family and of the church.

But even protectors, the pope said, need to show a "certain tenderness."

"In the Gospels, St. Joseph appears as a strong and courageous man, a working man," Francis said.

"Yet in his heart, we see great tenderness, which is not the virtue of the weak but rather a sign of strength of spirit and a capacity for concern, for compassion, for genuine openness to others, for love," he continued. "We must not be afraid of goodness, of tenderness."

For several in the crowd, the first days of Francis' papacy have already evoked a tenderness that they connect with.

"He seems like he's really going to be focused on people and bringing people together," said Kathy Olow, a U.S. native who now lives with her husband, Alex, and two children near Naples, Italy. They traveled 150 miles north to Rome for the inauguration.

Among those at Tuesday's inauguration were an estimated 131 delegations from countries around the world, including U.S. Vice President Joe Biden and Argentine President Cristina Fernández de Kirchner.

Before arriving at the foot of St. Peter's Basilica for the Mass, Francis toured the crowd in an open-air vehicle, his right arm extended in an open wave. As he neared certain sections of the crowd, some screamed, "Francesco," others, "Viva il papa."

At one point, the pope, wearing only a white cassock and the pope's traditional elbow-length cape, stepped out of the vehicle to greet a disabled man at the barricades set up to leave a path for him.

Ending the tour of the crowd, the pope entered St. Peter's to pray at the crypt of the tomb of the apostle Peter, where his remains are believed to be. Proceeding toward the crypt, the pope wore a white miter with brown trim and a simple white chasuble with one stripe down the center.

As he knelt before the crypt, several leaders of both Eastern Rite Catholic and Orthodox churches joined him. For the first time since the schism between the Western and Eastern churches in the year 1054, the ecumenical patriarch of Constantinople, Bartholomew I, attended the papal inauguration.

Brian Flanagan, an American theologian, said the presence of the eastern leaders showed Francis has "a different understanding of the papacy" than his predecessors.

"By praying with the Eastern patriarchs and major archbishops and not solely with his fellow cardinals, Francis underlines the theological ... equality of those churches with the Latin/Western church," said Flanagan, an assistant professor of theology at Marymount University in Arlington, Va.

Unlike Pope Benedict XVI, whose renunciation of the papacy Feb. 28 eventually led to Argentine Cardinal Jorge Mario Bergoglio's election as Pope Francis on March 13, the new pope did not wear his miter during the homily and spoke standing instead of seated.

"Make no mistake about it -- this is a liturgical revolution," said Benedictine Fr. Anthony Ruff, an associate professor of theology at Saint John's University in Minnesota. "And no one saw it coming."

Ruff said Francis preaches "like a simple parish priest -- at the ambo, not the chair, and without miter," noting that at a Mass last week, the pope also did not wear his miter during his homily.

"It will be interesting to see, in this age of instant communication, whether those bishops who have begun preaching with miter and crosier will dial it all back in imitation of Pope Francis," Ruff, who also runs the blog PrayTell, said.

For many in the crowd Tuesday, however, the focus wasn't on liturgical points but on more basic points of connection.

Krystal Montesdeoca, who was attending the Mass with a group from the University of Illinois, Urbana-Champaign said the beginning of Francis' papacy aligns with a new interest in the Catholic church.

Montesdeoca, who said she was raised Catholic but had not been practicing for some time before encountering the Newman Center at her university, said Francis' interest in the poor "really helps me understand the faith."

"I love that he's a humble man and about helping the poor," she said.

Fr. David Charters, a priest of the diocese of Shrewsbury, England, said he was encouraged by the presence of Bartholomew I at the event.

"It's a simple and humble reflection of the unity of the Christian faith," said Charters, a student at the Pontifical Ecclesiastical Academy, a college in Rome dedicated to training priests to serve in the Vatican diplomatic corps.

"The leader of Constantinople should be here," Charters said, standing among several other priests from the academy. "It's a sign of charity among all the Christian churches."

As Francis began his homily Tuesday, he addressed the crowd -- dignitaries included -- as "brothers and sisters," a way he has been addressing people in each of his public appearances since March 13.

Francis also said the fact that they were celebrating his inauguration on the feast of St. Joseph was a "significant coincidence," as Joseph is Pope Benedict's birth name.

"We are close to him with our prayers, full of affection and gratitude," Francis said of his predecessor.

Francis also said Joseph's example as protector of the church should extend to humanity's protection of creation.

Being a protector, the pope said, is not just a Christian calling, but also "has a prior dimension which is simply human, involving everyone."

"It means respecting each of God's creatures and respecting the environment in which we live," Francis said. "It means protecting people, showing loving concern for each and every person, especially children, the elderly, those in need, who are often the last we think about."

"In the end, everything has been entrusted to our protection, and all of us are responsible for it," he continued. "Be protectors of God's gifts."

As he concluded his homily, Francis invoked the intercession of Mary, Joseph, Peter, Paul and St. Francis of Assisi before ending: "I ask all of you to pray for me. Amen."

Among dozens of flags in the crowd were those of Argentina, Brazil, the United States, Turkey, France, Iran, Spain, China and the United Kingdom. Many in the crowd also held signs. One, signed "Colombia," read in Spanish: "Francis, friend of peace."

As he said the words of consecration for the Mass, Francis kept his voice at a low volume, almost hard to hear at points, and did not give inflection to any of the words.

He also did not distribute Communion to the crowd, instead having an estimated 500 priests and deacons walk in the square with yellow and white umbrellas so they could be seen by people there.

Kenneth Howell, a retired theology professor leading the student group from the University of Illinois, said he thought the new pope could help "guide the church into a simpler life."

"We appreciate all the beauty and the art of the church, but in the end our Catholic lives are called to be simple," Howell said. "He'll provide us with a good example."

Asked what hope he has for Francis' papacy, Howell said, "I would like to see him help us and guide us in terms of finding creative ways to share the Gospel of Jesus Christ."

"This is the time in history when the laity are called and want to fully participate in the mission of the church," he said. "I think he understands the clericalism in the church."

"But at the same time, he's deeply rooted in the good traditions of the church," Howell continued. "You need to be rooted in that."

Two Argentine women, standing next to each other during the Mass, said they were just hopeful to see Bergoglio, formerly the archbishop Buenos Aires, as pope.

The women, both from Buenos Aires but currently living in Washington, D.C., held up Argentine and U.S. flags.

Asked what they thought of their former bishop and current pontiff, one responded in broken English: "It's very, very important. He is hope."

[Joshua J. McElwee is an NCR staff writer. His email address is jmcelwee@ncronline.org. Follow him from the Vatican on Twitter at twitter.com/joshjmac.]