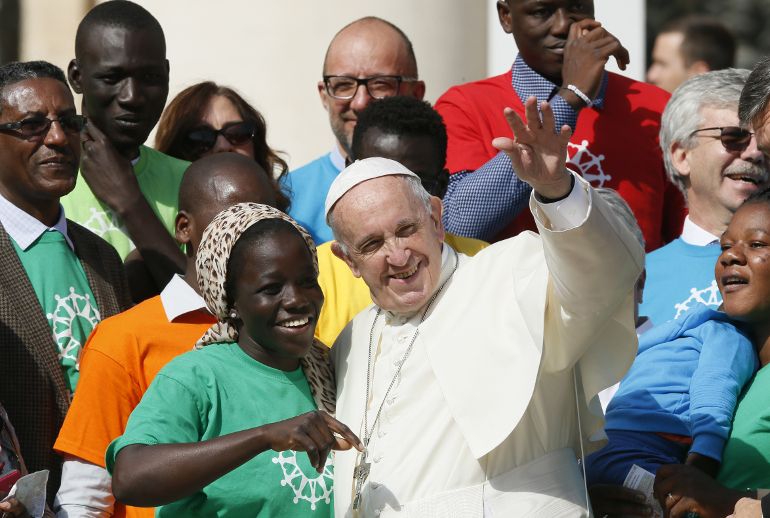 Vatican City — Pope Francis launched a two-year campaign led by the Catholic church's global confederation of social service agencies to encourage better understanding of the plight facing the world's record numbers of migrants and refugees Sept. 27. He called on Catholics to welcome those coming to their countries with "arms wide open."

Dedicating his entire general audience in St. Peter's Square to Caritas Internationalis' new "Share the Journey" campaign, the pope said Jesus asks Christians to welcome migrants with arms that are open and ready to give an "affectionate and embracing hug" to people escaping war and violent conflict.

In a reflection on the value of hope, Francis said hope is "the push in the heart" of both the migrant who leaves his or her homeland in search of a better life and the person who welcomes them and wants to "encounter them, to know them, to dialogue together."

"Share the Journey" is a two-year effort Caritas is organizing to strengthen relationships between migrants, refugees, and the communities in which they find themselves. The charity confederation is hoping the campaign, supported by its 165 allied Catholic development, relief, and social service agencies worldwide, will bring about a change of mentality about migrants.

The U.S. bishops, Catholic Charities, and Catholic Relief Services are promoting a week of prayer and action from Oct. 7-13 as part of the campaign.

Caritas has also launched a new website, sharethejourney.org, which has resources for how people can get involved, donate to projects that help migrants, and learn about people who have migrated to different parts of the world.

Pope Francis makes a gesture of an embrace in support of immigrants during his general audience in St. Peter's Square at the Vatican Sept. 27. (CNS photo/Paul Haring)

At a Vatican press conference Sept. 27, Caritas president Cardinal Luis Antonio Tagle said the confederation is proposing that people around the world open up to the possibility of taking a journey together.

"Maybe everyone does not feel ready to begin a journey with migrants," said Tagle, the archbishop of Manila, in the Philippines. "This is why Caritas is starting this campaign."

Asked what he might say to political leaders in countries where people have anti-immigrant sentiments, the cardinal said he hoped politicians could bring about a "conversion of mind" by encouraging their people to meet migrants and hear their stories.

"Many of the people who are afraid of migrants have never even met a migrant," said Tagle. "You will see they are like you and me; they are not [the] other."

The cardinal said he was reminded of his grandfather, who emigrated from China to the Philippines.

"Who would have thought he would produce a cardinal grandson?" asked Tagle, adding that he would tell politicians: "Don’t close the doors, you might be closing the doors to people who will enrich your society."

Bekele Moges, the executive director of Caritas Ethiopia, described the situation facing migrants in North Africa. "Some are dying," he said. "Some are really struggling to survive."

"They are not moving for the purpose of moving," said Moges. "We move because there is something forcing us to move. We need the world to protect us on our way. We need to the world to support us [in finding] our destination."

"Many of the people who are afraid of migrants have never even met a migrant."

Also speaking at the press conference was U.S. Missionary of Jesus Sr. Norma Pimentel, who is executive director of Catholic Charities of the Rio Grande Valley. Three migrants were present: Yancuba Darboe from Gambia, Amadou Darboe from Senegal, and Berete Ibrahima from Guinea.

Each of the migrants has harrowing stories. Ibrahima left Guinea at age 16 to study in Libya, only to be forced to leave after a war broke out. He then crossed the Mediterranean on a boat without a GPS system that became lost. The craft was rescued by Tunisian fisherman, which brought the people aboard to the Italian island of Lampedusa. Ibrahima now works as sous chef.

As the Caritas campaign got underway Sept. 27, bishops and some politicians around the world tweeted photos of themselves with their arms open, as the pope had encouraged Christians to be. Among those who did so were U.S. Cardinal Daniel DiNardo, Italian Cardinal Gianfranco Ravasi and Milan, Italy Mayor Beppe Sala.

In his reflection on hope in the general audience, Francis cited the 19th century French poet Charles Péguy, who saw hope as one of the most remarkable things in the world and marveled in one of his poems about poor children who “see how things are going and believe they will go better tomorrow.”

“The poet’s image brings to mind the faces of the many people who are transitory in this world … that have fought tenaciously despite the bitterness of a difficult today, full of many trials, but are yet animated by the trust that their children might have a life that is more just and serene,” he said.

“Hope is not a virtue for people who have full stomachs,” Francis said later. “That’s why the poor are always the first carriers of hope. To come into the world, God needed them: needed Joseph and Mary, needed the shepherds of Bethlehem.”

“On the night of the first Christmas, there was a world that slept … but the humble were preparing in their concealment the revolution of goodness,” he said. “They were all poor, some floating just above the threshold of survival, but were rich in the most precious good that exists in the world, that is, the desire to change.”