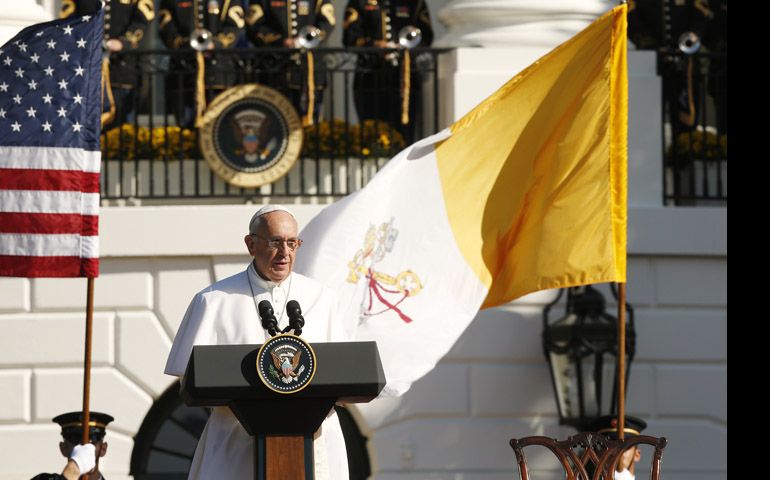 Pope Francis speaks during a ceremony with U.S. President Barack Obama on the South Lawn of the White House in Washington Sept. 23. (CNS photo/Paul Haring)
This article appears in the Francis in the United States feature series. View the full series.

Washington — Pope Francis met with U.S. President Barack Obama in an extraordinarily crowded public encounter outside the White House Wednesday morning, and praised the president for his work fighting climate change but also asked that he protect religious liberty in the country.

In the presence of a record-breaking crowd of some 15,000 invited guests, many of whom had arrived before dawn to glimpse the pope, Francis first thanked Obama for welcoming him -- a "son of an immigrant family" -- to the U.S.

The pope then expressed hope that the president would be "vigilant" in respecting religious liberty, but also said he and U.S. Catholics do not seek to practice any sort of discrimination.

"Together with their fellow citizens, American Catholics are committed to building a society which is truly tolerant and inclusive, to safeguarding the rights of individuals and communities, and to rejecting every form of unjust discrimination," the pontiff told the president.

"With countless other people of good will, they are likewise concerned that efforts to build a just and wisely ordered society respect their deepest concerns and their right to religious liberty," he continued.

"That freedom remains one of America’s most precious possessions," said Francis. "And, as my brothers, the United States Bishops, have reminded us, all are called to be vigilant, precisely as good citizens, to preserve and defend that freedom from everything that would threaten or compromise it."

The pope and president will now meet in private for a while and are expected to discuss issues away from spotlight.

Francis' visit to the White House Wednesday was his first public meeting during his six-day tour of the U.S. that will also take him to New York and Philadelphia.

Later Wednesday, the pope will meet with the U.S. bishops and then canonize 18th-century Franciscan missionary Fr. Junipero Serra during a Mass at Washington's Basilica of the National Shrine of the Immaculate Conception. On Thursday, he will address a joint meeting of Congress before heading to New York.

Anticipation for the pontiff's events has been extraordinarily high. Crowds began arriving at the White House in the very early hours of the morning Wednesday. Among those present were a wide range of people, including clergy of many denominations, women religious taking part in the Nuns On The Bus tour, members of Congress and the Cabinet.

For his part, Obama welcomed Francis to the U.S. with generous praise for his work and ministry -- saying the pope helps "shake our conscience from slumber."

The pope, Obama said, calls on us "to rejoice in Good News, and [gives] us confidence that we can come together, in humility and service, and pursue a world that is more loving, more just, and more free."

The president particularly mentioned the pontiff's humility, his focus on the 'least of these,' and his call for a church focused on mercy.

Francis' focus on asking for protection of religious liberty in the country echoes concerns the U.S. bishops have voiced in the recent years, particularly over provisions in the Affordable Care Act regarding procurement of contraceptives.

Obama also mentioned religious liberty in his speech, focusing particularly on the continuing murders of Christians in the Middle East.

"Here in the United States, we cherish religious liberty," said the president. "It was the basis for so much that brought us together."

"Yet, around the world at this very moment, children of God, including Christians, are targeted and even killed because of their faith," he continued.

"We stand with you in defense of religious freedom and interfaith dialogue, knowing that people everywhere must be able to live out their faith free from fear and intimidation," Obama told Francis.

The pope praised the president for measures he has taken to reduce air pollution, saying "it seems clear to me also that climate change is a problem which can no longer be left to a future generation."

"When it comes to the care of our 'common home,' we are living at a critical moment of history," said Francis.

"We still have time to make the changes needed to bring about 'a sustainable and integral development, for we know that things can change,'" the pope continued, citing his encyclical letter Laudato Si'.

"Such change demands on our part a serious and responsible recognition not only of the kind of world we may be leaving to our children, but also to the millions of people living under a system which has overlooked them," he said.

"Our common home has been part of this group of the excluded which cries out to heaven and which today powerfully strikes our homes, our cities and our societies," said Francis. "To use a telling phrase of the Reverend Martin Luther King, we can say that we have defaulted on a promissory note and now is the time to honor it."

Wednesday's ceremony at the White House was marked with much pomp and circumstance. Members of the U.S. military heralded Francis' arrival in full dress uniform, parading in dozens of U.S. and Vatican flags.

The wide range of people at the event even led one U.S. senator to say the pope had done something that was before thought impossible.

Iowa Senator Chuck Grassley tweeted that you "might not believe this" but that Republicans were talking to Democrats while waiting for Francis.

The pontiff spoke in slowly-pronounced English during the White House ceremony. He is expected to use that language only a handful of times while in the U.S., preferring to speak in his native Spanish.

The church is not a museum, so let Francis change things

Burke: Church under Francis is a 'ship without a rudder'