Francis opens synod calling for church that is bridge, not roadblock 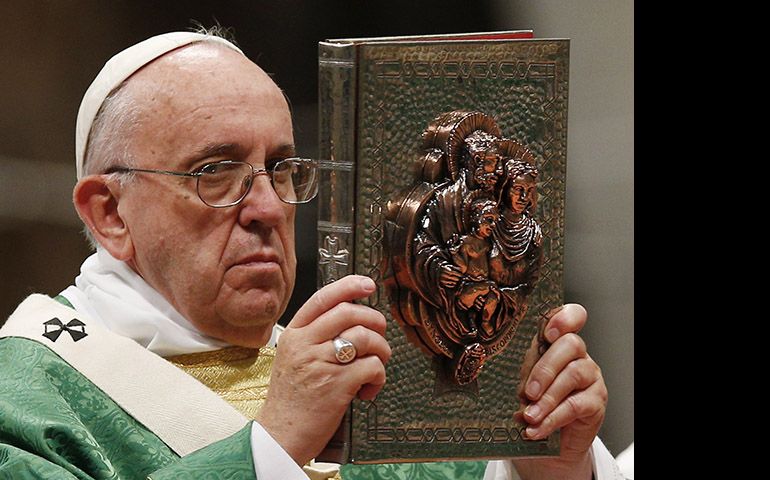 Pope Francis raises the Book of the Gospels during the opening Mass of the Synod of Bishops on the family in St. Peter's Basilica at the Vatican Oct. 4. The cover of the book is decorated with an image of the Holy Family. (CNS/Paul Haring)
This article appears in the Family Synod 2015 feature series. View the full series.

Vatican City — Pope Francis has opened his much anticipated second worldwide meeting of Catholic bishops on family issues by telling prelates gathered from around the globe for the discussions they have a duty to uphold Catholic teachings but also must resist holding too fast to legalistic interpretations of God’s love.

In a homily Sunday during the opening Mass for the meeting, known as a Synod of Bishops, the pope said the church has a duty to proclaim truth “that is not changed by passing fads or popular opinions.”

At the same time, however, Francis told church leaders they must not forget “the Sabbath was made for man, not man for the Sabbath.”

Quoting a 1978 reflection by Pope John Paul II, the pontiff said: “Error and evil must always be condemned and opposed; but the man who falls or who errs must be understood and loved … we must love our time and help the man of our time.”

“The Church must search out these persons, welcome and accompany them,” Francis told the some 270 bishops gathered in St. Peter’s Basilica for the Mass. “A Church with closed doors betrays herself and her mission, and, instead of being a bridge, becomes a roadblock.”

Francis was speaking Sunday at the first event of the 2015 Synod, which is bringing some 318 people to Rome for three weeks, from Oct. 4-25, for discussions on issues of family life.

The meeting has attracted wide interest for its expected focus on a number of pressing issues facing families -- including some controversial matters like contraception, same-sex marriage, and divorce and remarriage.

The pontiff has called two such meetings for 2014 and 2015. This year’s event has been given the theme: “The vocation and mission of the family in the Church and the contemporary world.”

In the opening homily Sunday, Francis balanced upholding traditional Catholic teachings with several exhortations that bishops should beware of being too legalistic in their considerations during the three-week meeting.

The pope focused his reflections on three themes: solitude, love between man and woman, and family. He then said the church is called to carry out its mission for the family in fidelity, truth and love.

In terms of fidelity, the pontiff said church leaders are called to listen to God “as a voice crying out in the desert” by defending love and encouraging families. Leaders are also called to defend “the sacredness of life, of every life” and the “unity and indissolubility of the conjugal bond as a sign of God’s grace,” he said.

In truth, Francis said the church is called to proclaim truth “that protects individuals and humanity as a whole from the temptation of self-centeredness and from turning fruitful love into sterile selfishness, faithful union into temporary bonds.”

The church is called to carry out its mission in love “not pointing a finger in judgment of others, but … conscious of her duty to seek out and care for hurting couples with the balm of acceptance and mercy,” said the pope.

The church, he said, should be conscious “of her duty to be a ‘field hospital’ with doors wide open to whoever knocks in search of help and support; to reach out to others with true love, to walk with our fellow men and women who suffer, to include them and guide them to the wellspring of salvation.”

Francis was reflecting in his homily Sunday on readings that were particularly appropriate for the occasion.

The first reading, taken from Genesis’ second creation story, recounts Adam’s loneliness before God’s creation of his partner, Eve. The Gospel, taken from Mark, sees Jesus answer those who test him by asking if a man can divorce his wife.

Responding to that Gospel reading, the pope said Jesus responded “in a straightforward and unexpected way.”

“He brings everything back to the beginning of creation, to teach us that God blesses human love, that it is he who joins the hearts of two people who love one another, he who joins them in unity and indissolubility,” said Francis. “This shows us that the goal of conjugal life is not simply to live together for life, but to love one another for life!”

Quoting Jesus’ response to his questioners -- “What God has joined together, no human being must separate" -- the pontiff said that response is a call to overcome legal rigorism.

Jesus’ decree, Francis said, is “an exhortation to believers to overcome every form of individualism and legalism which conceals a narrow self-centeredness and a fear of accepting the true meaning of the couple and of human sexuality in God’s plan.”

“Indeed, only in the light of the folly of the gratuitousness of Jesus’ paschal love will the folly of the gratuitousness of an exclusive and life-long conjugal love make sense,” said the pope. “For God, marriage is not some adolescent utopia, but a dream without which his creatures will be doomed to solitude! Indeed, being afraid to accept this plan paralyzes the human heart.”

Francis opened his homily Sunday with a reflection on the solitude faced by Adam before Eve’s creation, relating it to the solitude felt by many today.

“The drama of solitude is experienced by countless men and women in our own day,” said the pope, mentioning the elderly, widows and widowers, refugees and migrants, and young people “who are victims of the culture of consumerism, the culture of waste, the throwaway culture.”

“Today we experience the paradox of a globalized world filled with luxurious mansions and skyscrapers, but a lessening of the warmth of homes and families,” said the pontiff. “The number of people who feel lonely keeps growing, as does the number of those who are caught up in selfishness, gloominess, destructive violence and slavery to pleasure and money.”

“Our experience today is, in some way, like that of Adam: so much power and at the same time so much loneliness and vulnerability,” he said.

After the homily Sunday, Francis recited the traditional weekly Angelus prayer with pilgrims in St. Peter’s Square. He asked those gathered for the occasion to pray for the work of the synod so that the bishops would articulate God’s plan for the family “in all its beauty and strength in today’s world.”

The pontiff also reflected then on Europe’s continuing refugee crisis, asking that the Lord make all members of society “instruments of that welcoming and of that love with which Jesus embraces the smallest.”

“I think of so many children who are hungry, abandoned, taken advantage of, forced to go to war, rejected,” said the pope. “It is sad to see the images of unhappy children, with a dismayed look, that run from war and conflicts, knocking on our doors and our hearts asking for our help.”

“May the Lord help us to not be a fortress-society but a family-society, able to welcome, with adequate laws, but welcome,” he asked. “Always welcome, with love!”

The Synod of Bishops will begin its deliberations Monday with two days of open discussion among the bishops before they break into small group meetings on Wednesday. The deliberations will continue for the next three weeks, after which Francis is expected to close the meeting with some sort of final address Oct. 25.

The pope may also open the event with an initial reflection Monday morning, but Vatican officials have said they do not know if the pontiff plans to do so.

The Vatican has said there will be daily press briefings on the Synod’s discussions, to take place each day at about 1:00 PM in Rome.

Vatican | Francis opens synod calling for church that is bridge, not roadblock

Dolan: Pope's remark on gays does not change church teaching

Pope to name St. Irenaeus of Lyon a doctor of the church