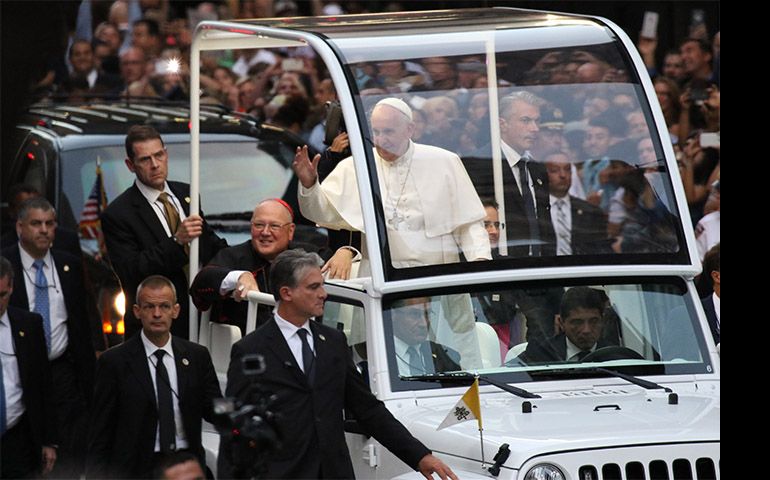 Pope Francis waves to the crowds as he approaches St. Patrick's Cathedral in New York City Sept. 24. Seated next to him is Cardinal Timothy M. Dolan of New York. (CNS photo/Gregory A. Shemitz)
This article appears in the Francis in the United States feature series. View the full series.

New York — Pope Francis has poignantly thanked U.S. Catholic women religious -- until recently the subject of two controversial Vatican investigations -- for their work in building and maintaining the church throughout the country.

But the pontiff has also made his second statement in as many days that only obliquely mentions the clergy sexual abuse crisis, and refers to the shame brought upon priests and religious due to the perpetrators but not the pain faced by survivors.

In a prayer service with priests and members of religious orders at St. Patrick's Cathedral here Thursday evening, Francis said he wanted to express his "esteem and gratitude" to women religious of the United States "in a special way."

"What would the Church be without you?" he asked the women religious.

"Women of strength, fighters, with that spirit of courage which puts you in the front lines in the proclamation of the Gospel," the pope described the women.

"To you, religious women, sisters and mothers of this people, I wish to say 'thank you,' a big thank you," he said. "And to tell you that I love you very much."

"I know that many of you are in the front lines in meeting the challenges of adapting to an evolving pastoral landscape," Francis told them, amidst a prolonged standing applause in the packed Gothic cathedral.

"Whatever difficulties and trials you face, I ask you, like Saint Peter, to be at peace and to respond to them as Christ did," the pope continued. "He thanked the Father, took up his cross and looked forward!"

Earlier in the service, the pope told the priests, brothers, and sisters that he had come to join them in prayer "that our vocations will continue to build up the great edifice of God’s Kingdom in this country."

"I know that, as a presbyterate in the midst of God’s people, you suffered greatly in the not distant past by having to bear the shame of some of your brothers who harmed and scandalized the Church in the most vulnerable of her members," he said, in an apparent reference to the abuse crisis.

"In the words of the Book of Revelation, I know well that you 'have come forth from the great tribulation,'" the pope continued. "I accompany you at this time of pain and difficulty, and I thank God for your faithful service to his people."

Francis was speaking Thursday in his first public remarks after arriving in New York that afternoon. The pope has been making a trip to the U.S. since Tuesday -- starting in Washington and continuing on to Philadelphia on Saturday.

Crowds along the path of the popemobile to the cathedral were overwhelming, stopping the vehicle from moving very quickly. The pope was literally surrounded by plainclothes security officers, lined nearly arm-in-arm.

The pontiff opened his remarks inside the cathedral with an unplanned moment expressing condolences and prayers for the hundreds of people who were killed in a stampede in Mecca Thursday, during part of the traditional pilgrimage for the Muslim holiday of Eid al-Adha.

The pope expressed sentiments for our "Muslim brothers and sisters" and said he wished he could greet them under warmer circumstances. He asked those in the church to unite in prayer with him for them.

Francis has several engagements in New York before heading to Philadelphia on Saturday. He will address the general assembly of the U.N. Friday morning.

The pope mainly spent his remarks with the priests and members of religious orders Thursday night by offering two reflections on the spirit of gratitude and the spirit of hard work.

"Joy springs from a grateful heart," he told the clergy. "Truly, we have received much, so many graces, so many blessings, and we rejoice in this. It will do us good to think back on our lives with the grace of remembrance."

"Perhaps we need to ask ourselves: Are we good at counting our blessings?" he said.

A grateful heart, the pope said, is also "spontaneously impelled to serve the Lord and to find expression in a life of commitment to our work."

"Once we come to realize how much God has given us, a life of self-sacrifice, of working for him and for others, becomes a privileged way of responding to his great love," he said, warning against a kind of "spiritual worldliness" that "weakens our commitment to serve and diminishes the wonder of our first encounter and stupor with Christ."

Francis also warned the men and women to not "get caught up measuring the value of our apostolic works by the standards of efficiency, good management and outward success which govern the business world."

"We have been entrusted with a great responsibility, and God’s people rightly expect accountability from us," said the pope. "But the true worth of our apostolate is measured by the value it has in God’s eyes. To see and evaluate things from God’s perspective calls for constant conversion in the first days and years of our vocation and, need I say, great humility."

"The cross shows us a different way of measuring success," he said. "Ours is to plant the seeds: God sees to the fruits of our labors. And if at times our efforts and works seem to fail and produce no fruit, we need to remember that we are followers of Jesus -- and his life, humanly speaking, ended in failure, the failure of the cross."

The pontiff also told the religious to be careful of surrounding themselves with worldly comforts.

"We need to learn how to rest in a way that deepens our desire to serve with generosity," he said. "Closeness to the poor, the refugee, the immigrant, the sick, the exploited, the elderly living alone, prisoners and all God’s other poor, will teach us a different way of resting, one which is more Christian and generous."

Francis had previously spoken obliquely about the sexual abuse crisis in Washington Wednesday during a speech to some 300 U.S. bishops in the Cathedral of St. Matthew.

On that occasion, he told the bishops: "I realize how much the pain of recent years has weighed upon you."

"I have supported your generous commitment to bring healing to victims -- in the knowledge that in healing we too are healed -- and to work to ensure that such crimes will never be repeated," the pope said.

Survivors' advocates widely criticized those words, saying they insufficiently addressed the scope of the clergy abuse crisis in the U.S. The National Survivor Advocates Coalition even said the pope had "described a fairy tale" of the bishops' handling of abuse.

Women religious in the U.S. had been subject to two Vatican investigations, both of which concluded in the last year.

One, known as an apostolic visitation, concerned the individual congregations of women religious in the country. The other, undertaken by the Congregation for the Doctrine of the Faith, was directed at the women's main umbrella group, the Leadership Conference of Women Religious.

Francis arrived in New York Thursday amid a festive atmosphere, with a band greeting his airplane on arrival with a rendition of the famous song "New York, New York."

Vatican | Francis praises US women religious, but is non-specific on sexual abuse