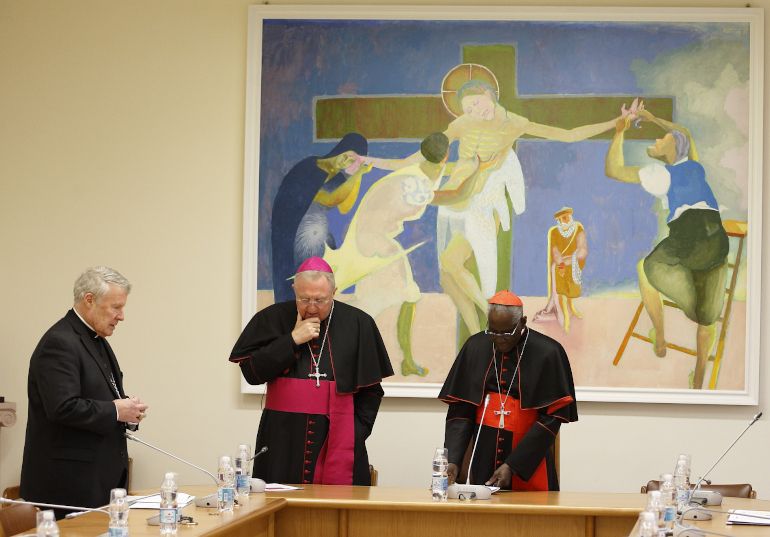 Cardinal Robert Sarah, then prefect of the Congregation for Divine Worship and the Sacraments, and Archbishop Arthur Roche, then secretary of the congregation, pray with U.S. bishops at the start of a meeting at the congregation at the Vatican Jan. 14, 2020. (CNS/Paul Haring)

Rome — Pope Francis on May 27 named a relatively low-profile British prelate to replace Cardinal Robert Sarah as the leader of the Vatican office charged with overseeing most of the global Catholic Church's liturgical rites.

Archbishop Arthur Roche, who had served as the No. 2 official at the Congregation for Divine Worship and the Discipline of the Sacraments since 2012, is now the office's prefect.

A former head of the Diocese of Leeds, England, Roche is known in Rome as something of a quiet voice, not often stepping into the limelight except for official press conferences or announcements.

Unlike his predecessor Sarah, who was often seen as an opponent of Francis' vision for the global church, Roche is not known to maintain a Twitter account, nor to often give interviews.

Roche, 71, had been leading the Vatican office on an interim basis since February, when the pope accepted Sarah's resignation. Sarah had turned 75, the traditional retirement age for bishops, in June 2020.

Beyond Roche, Francis also appointed new No. 2 and No. 3 officials for the congregation. Bishop Vittorio Viola, until now the head of the Italian Diocese of Tortona, north of Genoa, will serve as secretary. Msgr. Aurelio Marcias, formerly a department head at the office, will now serve as its under-secretary.

After Sarah's resignation, Francis had taken the unusual step of asking that an outside expert consult with the Vatican office's staff to review its procedures and consider what might be needed in a new prefect. In a March interview with Catholic News Service, Roche compared the consultation process to how a bishop might consult with a parish before appointing a new pastor.

Roche was brought to Rome from Leeds in 2012 by retired Pope Benedict XVI. He has previously been an auxiliary bishop of Westminster, the Catholic Church's archdiocese in London, and a general secretary of the bishops' conference of England and Wales.

Sarah had led the Vatican congregation since 2014 and was known as a vocal proponent of more traditional styles of Catholic liturgy.

Sarah came under scrutiny earlier in Francis' papacy when it became apparent the cardinal had waited years to implement a papal instruction to change church law to allow for women to be among those who have their feet washed at Holy Thursday services.

While in Leeds, Roche had also served as the chairman of the International Commission on English in the Liturgy (ICEL), set up by bishops' conferences across the English-speaking world after the 1962-65 Second Vatican Council to help in providing translations for Latin-language liturgical texts.

During Roche's tenure at the commission, much of its authority had been assumed by a Vatican committee, known as Vox Clara, which had been created by Pope John Paul II in 2001 to specifically evaluate English-language liturgical translations.

Francis decentralized authority over how the texts used in the Catholic Church's liturgies are translated from Latin into local languages in 2017, moving most responsibility for the matter from the Vatican to national bishops' conferences.

Unusually, the official commentary from the Vatican worship office at the time of that change came not from Sarah, then the office's leader, but Roche. The archbishop said then that the pope's changes reflected a hope that the Vatican and bishops' conferences could work "in a spirit of dialogue" about liturgical translations.

Summer is over, but midsummer madness continues in the church