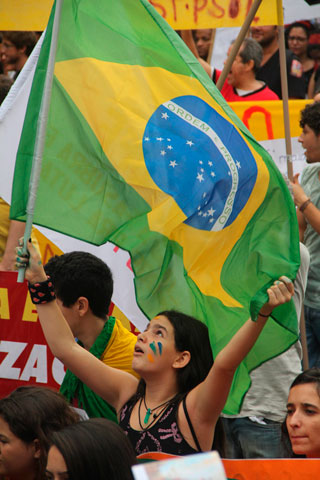 While he's busy launching one revolution in Rome, overhauling entrenched ways of doing business in the Vatican, Pope Francis is about to step into the middle of another one in the streets of Brazil when he visits Rio de Janeiro July 22-28 for World Youth Day.

Much of the drama of his first overseas trip boils down to whether Brazil's discontented masses will see the government-subsidized Catholic event as part of the problem, or Francis as an icon of the solution.

The demonstrations that have rocked Brazil began with resentment over a modest increase in bus fares (since rolled back), and they've fed on outrage over public spending on flashy global events, such as the 2014 World Cup and the 2016 Olympics, while services such as education, health care, and transportation remain substandard.

Basic calm returned after the June 30 finale of soccer's Confederations Cup, the last major tune-up before the World Cup, but some observers believe unrest could revive while the pope is in town.

"New demonstrations could take place during World Youth Day, an event that turns the global spotlight on the country and mobilizes its social structures," said Paulo Henrique Martins, president of the Latin American Sociological Association.

Leaders of the Brazilian church have played down those prospects, in part out of concern they could affect attendance.

Archbishop Orani João Tempesta of Rio de Janeiro has said that everything will be fine, a sentiment echoed by Vatican security chief Domenico Giani, who told media that "there will not be any safety issues, whether for the pope or for those in attendance."

Church leaders have signaled support for the amorphous protest movement. Tempesta said the demonstrations are "in some ways similar to the spirit of World Youth Day -- the desire to work together for a new world, for a new life." In late June the Brazilian bishops' conference issued a statement expressing "solidarity and support."

In early July, the Spanish newspaper El País published what it claimed was a private remark by Francis calling the protests "just and coherent with the Gospel." While the Vatican didn't confirm it, they didn't deny it either.

The new pope brings street credibility as an advocate for the poor. He's expressed his longing for a "poor church for the poor," and he's also spoken out forcefully against the inequities of "savage capitalism." While in Brazil, he's scheduled to visit Rio's Manguinhos slum.

Francis should also benefit from the regional pride attached to being history's first Latin American pope.

It helps that most costs for World Youth Day are being covered by the church and by participant fees. The government is on the hook for only around $50 million in security and transportation subsidies -- as opposed to the estimated $12.7 billion it's shelling out to upgrade stadiums for the World Cup.

One is to set a tone for church-state relations in Latin America, where the rising force is what analysts have called the "pink tide," referring to the electoral success of center-left parties. Of the 21 nations on the continent, 14 are presently ruled by left-leaning parties, including Brazil.

Francis may be pressed to send signals that the church can do business with social forces that don't share its values. He'll have to overcome some baggage, given his ambivalent relationship as archbishop of Buenos Aires with Argentina's leftist government of Cristina Kirchner, especially over gay marriage.

Another test is revitalizing the Catholic church on a continent where it's suffered serious losses, both to mushrooming Pentecostal and evangelical movements and to secular indifference.

During their 2007 assembly, the Latin American bishops called for a "great continental mission" to revive the church's missionary energies. Francis was a primary author of that document and he's presented a copy to every Latin American leader he's met since becoming pope.

Yet most observers say the "great continental mission" remains more an ambition than an accomplished fact. It remains to be seen whether Francis can inspire a new missionary spirit, and Rio de Janeiro looms as an obvious shakedown cruise.

Francis arrives late on July 22. After a day of rest on July 23, he'll travel to the Marian shrine of Aparecida on July 24. His schedule culminates with a youth vigil on July 27 and an open-air Mass wrapping up World Youth Day July 28.

Brazil is the only overseas trip on Francis' schedule for 2013, though a Chilean archbishop recently told reporters that Francis will visit Constantinople as well as Africa and Asia in 2014. Archbishop Ricardo Ezzati Andrello of Santiago de Chile said Francis told him he might return to South America in 2015, traveling to his native Argentina as well as Uruguay, Chile and possibly Peru.

A version of this story appeared in the July 19- August 1, 2013 print issue under the headline: Francis steps into a revolution in Brazil.