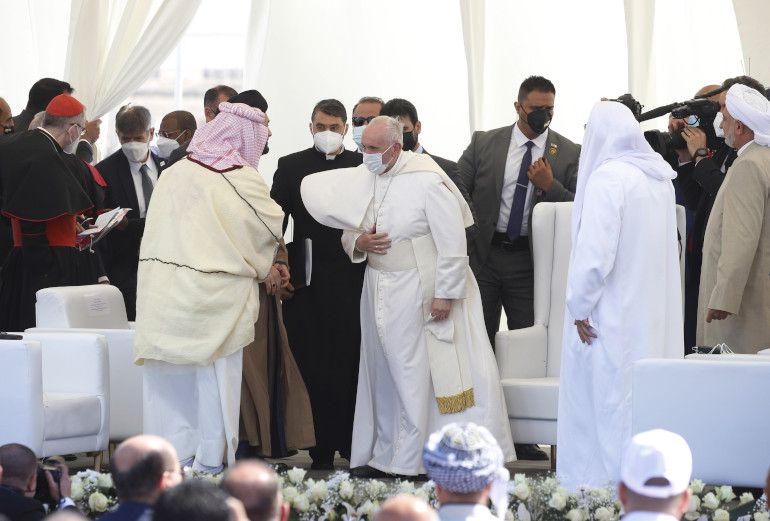 Pope Francis arrives for an interreligious meeting on the plain of Ur near Nasiriyah, Iraq, March 6. (CNS/Paul Haring)

UR, IRAQ — Invoking the shared origins of Christians, Muslims and Jews steps from the Ziggurat ruins of the ancient city that the Prophet Abraham once called home, Pope Francis March 6 called on Iraq's religious leaders to help the country heal and rebuild following decades of violence.

In a potent address only about a month after the country's capital suffered its first suicide bombing in two years, the pontiff urged faith leaders to affirm that violence and extremism are "betrayals of religion" and that hatred of others is the "greatest blasphemy."

The pope likewise pleaded that religious groups would help Iraq's various communities not consider one another as enemies, referencing God's promise thousands of years ago to Abraham that his descendants would outnumber the stars in the night sky.

"Anyone with the courage to look at the stars, anyone who believes in God, has no enemies to fight," said Francis. "He or she has only one enemy to face, an enemy that stands at the door of the heart and knocks to enter. That enemy is hatred."

Francis is visiting Iraq through March 8. The visit, which is taking place amid tight security measures and the ongoing coronavirus pandemic, has two primary objectives: encouraging the country's historic but diminishing Christian community and pursuing interreligious dialogue.

The second objective was the primary focus of the day on March 6. 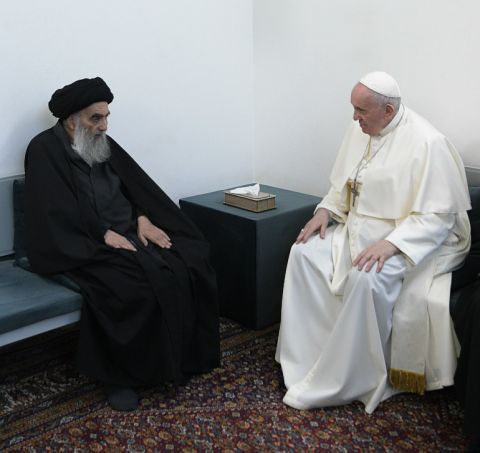 Before coming to Ur, Francis traveled first to Najaf, considered the third holiest city for Shia Muslims. While there, the pope took part in a first-of-its-kind encounter with Grand Ayatollah Ali al-Sistani, one of the world's most influential Shiite Muslim clerics.

The meeting, which was closed to others, lasted about 45 minutes — about 15 minutes longer than originally scheduled. In a photo released by the Vatican, the two leaders are seen in a simple undecorated room with white walls, looking at each other across a corner table while seated on separate couches.

A later statement from the Vatican alluded to the role that Sistani had played in 2014 in urging Muslims to join the Iraqi government's fight against the brutal ISIS regime, saying the pope had thanked the ayatollah for how "in the face of great violence" the Shia community had "raised its voice in defense of the persecuted … affirming the sacredness of human life."

Hassan Amer, an Iraqi who works for Catholic Relief Services, told NCR he hoped the pope's focus on interreligious dialogue might help the country's ethnic and religious communities unite to rebuild the country after the devastation wrought in the years since the 2003 U.S.-led invasion and the rise and fall of ISIS.

Amer, who leads a project helping families return to regions once controlled by the terrorist group, cited an Islamic saying: "People for people, regardless of religion."

"The pope's visit will underline this message for all Iraqi communities," said the CRS official. "The visit will also underline the solidarity of the international community and religious institutions with the people of Iraq, signifying to Iraqis that we can come together to rebuild our country and restore peace, regardless of our religions."

Emile Nakhleh, the founding former director of the CIA's Political Islam Strategic Analysis Program, told NCR that he thought the visit with Sistani would prove to be "very important."

Nakhleh, now the coordinator of National Security Programs at the University of New Mexico, said the visit with Sistani "may be the most important part of the trip for the majority of Iraqis."

Louay al-Yasiri, the governor of Najaf, told the national Al-Iraqiya channel that the encounter was "greater than historic." Marsin Alshamary, an Iraqi and post-doctoral fellow at the Brookings Institution who has studied the involvement of Shia clerics in Iraqi politics, said it was "surreal to witness such a historic moment."

Francis spoke in Ur to a small group of a few hundred people, gathered outside on a clear but windy day. Excavated ruins of the Sumerian city, founded about 5,000 years ago, were visible at the edge of the group, while the larger Ziggurat, a stepped-pyramid structure, loomed on the horizon.

The pope was responding in his remarks to the testimony of several young people, including Dawood Ara, a Christian, and Hasan Salim, a Muslim, who told Francis how they had borrowed money together to open a simple store to sell clothes.

"We would like many other Iraqi people to make the same experience," said Ara. "We don’t want war and violence and hatred; we want that all people in our country work together and be friends."

Rafah Husein Baher, a member of the gnostic Mandean community, said all Iraqis, no matter their religion, had been affected by war and violence. "Our blood was mixed … we have the same identity," she said.

Francis' visit to Iraq, during which the pope is scheduled to visit six cities over three days, is historic on several fronts. It is the first time a Catholic pontiff has visited the Muslim-majority country and the first time Francis has traveled abroad in some 15 months due to the ongoing coronavirus pandemic.

Although some health care professionals have expressed fears that the pontiff's visit could facilitate spread of the virus, the Vatican and local organizers say stringent social distancing and masking protocols are being put in place for each of Francis' events in Iraq.

Those measures appeared to be stretched thin, however, at the pope's final public event on March 6, when he led the celebration of a Chaldean rite Catholic liturgy at Baghdad's Chaldean Cathedral of St. Joseph.

Although nearly all of the some 250 participants in the Mass were wearing masks, they were seated less than six feet apart. The ventilation in the space was also poor, with only two doors at the back of the sanctuary to let in some air, and there was a choir leading the assembly in song.

Howard Forman, a practicing emergency radiologist and director of the health care management program in the Yale School of Public Health, told NCR the presence of the choir could be concerning.

"In the grand scheme of things: [this is] much better than many events we have regularly seen in the USA," said Forman. "But more risks that most of us would recommend."

The pope and those traveling with him were vaccinated by the Vatican in advance of the journey.

Francis is to continue his visit in Iraq March 7 by focusing on the plight of Iraqi Christians, whose history in the country stretches back to the time of the Apostles but have become a diminished minority after persecution by ISIS.

While Christians once numbered about 1.5 million in a total Iraqi population of about 39 million, they are estimated now to number in the hundreds of thousands.

Francis on March 7 will head north to Mosul and Qaraqosh, cities that have historically had significant Christian communities but were decimated under ISIS control from 2014 to 2017. The pope will also visit Irbil, the capital of Iraq's Kurdistan region and never under ISIS control, which hosted many of those fleeing the terror group.

This story was updated at 9:40 a.m. CST with details of the Mass at Baghdad's Chaldean Cathedral of St. Joseph.

Your thoughts on making the Catholic Church great (again), the U.S. bishops' retreat and more