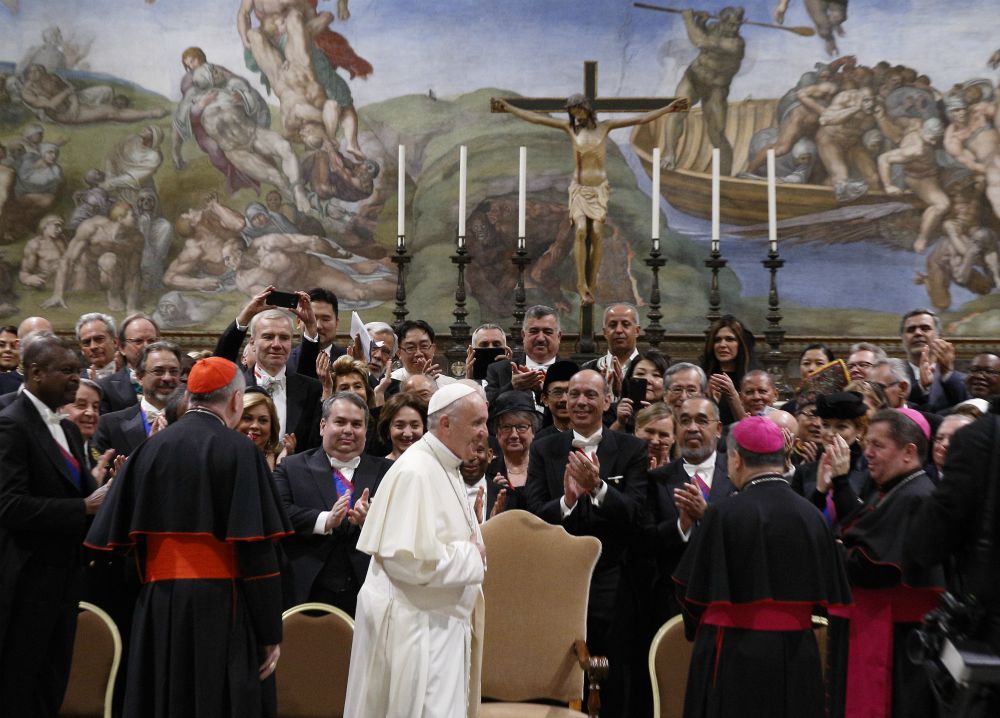 Pope Francis is pictured after a group photo with diplomats accredited to the Holy See during an annual meeting at the Vatican Jan. 8. (CNS/Paul Haring)

Pope Francis has sharply criticized global leaders who only talk about the plight of migrants and refugees "for the sake of stirring up primal fears," telling ambassadors accredited to the Vatican in an annual address Jan. 8 it is time to "abandon the familiar rhetoric" and help the record numbers of people fleeing violence today.

The pontiff told the diplomats that a person's ability to leave their country and then to return is a "fundamental human right." He also referred to the many stories of migrants referenced in biblical teaching, saying: "In the Judeo-Christian tradition, the history of salvation is essentially a history of migration."

While Francis said the Vatican "has no intention of interfering in decisions that fall to states," he said it considers its role to "appeal to the principles of humanity and fraternity at the basis of every cohesive and harmonious society."

The pope praised Italy, Greece and Germany for the efforts the three countries have taken to welcome migrants and said the arrival of newcomers should "spur Europe to recover its cultural and religious heritage, so that … it can keep alive her own tradition while continuing to be a place of welcome, a herald of peace and of development."

Francis was speaking Jan. 8 to the some 180 ambassadors accredited to the Holy See in an annual event in which the pope gives what is often called his "State of the World" address. Migration was one of many global issues the pontiff touched upon in the pope's wide-ranging 47-minute speech this year, given in the Vatican's 16th-century Sala Regia.

The pontiff also called for a new global debate on nuclear disarmament, lambasted a coming "demographic winter" in the West due to declining birth rates, and asked for respect of the current status of Jerusalem, despite U.S. President Donald Trump's recent unilateral decision to recognize the city as the capital of Israel.

Francis framed his address as an opportunity to reflect on the status of human rights around the world in light of the coming anniversary of the United Nation's December 1948 adoption of the Universal Declaration of Human Rights. The pope said there is a "significant relation" between that document and the Gospel message.

The pope started his evaluation of rights around the world with the right to life, liberty and personal security. He said that while war and violence infringes upon that right in many places on the globe that there are also now "more subtle means" used against it.

Francis named one means as the "innocent children discarded even before they are born, unwanted at times simply because they are ill or malformed, or as a result of the selfishness of adults."

The pontiff also claimed that the interpretation of human rights has "progressively changed" since the 1960s, "with the inclusion of a number of 'new rights' that not infrequently conflict with one another." He criticized what he called "the rise of modern forms of ideological colonization by the stronger and the wealthier, to the detriment of the poorer and the most vulnerable."

On the issue of nuclear disarmament, Francis praised as "historic" a new U.N. treaty, signed by 122 countries, that calls for the complete elimination of nuclear weapons. Without specifically referencing North Korea's development of a nuclear weapons program, the pope said it is of "paramount importance to support every effort at dialogue on the Korean peninsula."

Francis has developed the Catholic Church's official teaching on nuclear weapons in the past year, departing from the church's prior acceptance of the Cold War-era system of nuclear deterrence and denouncing the continuing possession of nuclear weapons by various world governments.

The pope said Jan. 8 that he wants to "encourage a serene and wide-ranging debate on the subject." He said "every effort in this direction, however modest, represents an important step for mankind."

Mentioning that the Vatican has signed and ratified the new disarmament treaty, Francis said it did so based on the belief expressed in Pope John XXIII's 1963 encyclical Pacem in Terris that "justice, right reason, and the recognition of man's dignity cry out insistently for a cessation to the arms race."

On the status of Jerusalem, Francis said he was calling on the global community "for a common commitment to respect, in conformity with the relevant United Nations Resolutions, the status quo."

"Seventy years of confrontation make more urgent than ever the need for a political solution that allows the presence in the region of two independent states within internationally recognized borders," said the pope.

Trump recognized Jerusalem as Israel's capital in December, breaking with nearly seven decades of U.S. foreign policy and angering Palestinians, who have long hoped that East Jerusalem might serve as the capital of an independent Palestinian state.

Francis spoke about a "demographic winter" in the context of the Universal Declaration of Human Rights' recognition of the family as a "natural and fundamental group unit of society… entitled to protection by society and the state." He said that in many parts of the West the family "is considered an obsolete institution."

"Today fleeting relationships are preferred to the stability of a definitive life project," he said. "But a house built on the sand of frail and fickle relationships cannot stand. What is needed instead is a rock on which to build solid foundations. And this rock is precisely that faithful and indissoluble communion of love that joins man and woman."

"Disregard for families has [a] dramatic effect — particularly present in some parts of the world — namely, a decline in the birth rate," Francis said.

"We are experiencing a true demographic winter!" he said. "This is a sign of societies that struggle to face the challenges of the present, and thus become ever more fearful of the future, with the result that they close in on themselves."

Francis mentioned several other precarious situations in the world by name in his address.

The pope said Venezuela, where President Nicolas Maduro has outlawed opposition parties and has been accused of acting as a dictator, has been "experiencing an increasingly dramatic and unprecedented political and humanitarian crisis."

Francis singled out South Sudan, the Democratic Republic of the Congo, Somalia, Nigeria and the Central African Republic, as places "where the right to life is threatened by the indiscriminate exploitation of resources, terrorism, the proliferation of armed groups and protracted conflicts."

Francis also spoke about Ukraine, saying 2017 "reaped new victims in the conflict that afflicts the country, continuing to bring great suffering to the population."

On migration, the pope called integration of refugees a "two-way process" in which the countries that welcome those in need must care for them and those being welcomed must respect their hosting country's identity and values.

The International Organization for Migration estimates that at least 2,832 migrants died crossing the Mediterranean from Africa into Europe in make-shift boats in 2017. Eight people died and 84 people were rescued by the Italian Coast Guard after their boat sank off the coast of Libya Jan. 7.