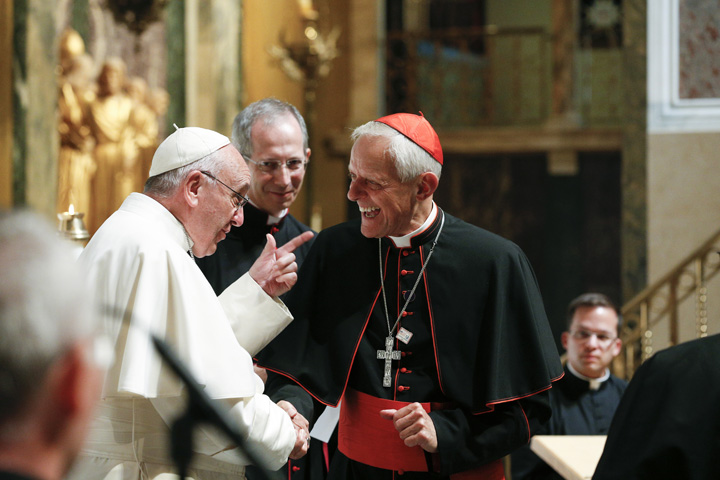 Pope Francis greets Washington Cardinal Donald Wuerl of Washington as the pope meets with U.S. bishops in the Cathedral of St. Matthew the Apostle in Washington Sept. 23. (CNS/Paul Haring)

Pope Francis has earnestly outlined exactly what he wants from the U.S. Catholic bishops, telling them Wednesday that they should seek to be shepherds who never shy away from dialogue, do not fight with one another, and always seek out opportunities for encounter.

In a prayer service with hundreds of American bishops at Washington's Cathedral of St Matthew, the pope described the way of the shepherd to his episcopal brethren with compelling and moving language and imagery.

Most of all, the pontiff told the U.S. bishops that they should not close in on themselves but seek to go out and be at service to dialogue and encounter.

"I know that you face many challenges, that the field in which you sow is unyielding and that there is always the temptation to give in to fear, to lick one’s wounds, to think back on bygone times and to devise harsh responses to fierce opposition," Francis said.

"Yet we are promoters of the culture of encounter," he continued. "We are living sacraments of the embrace between God’s riches and our poverty. We are witnesses of the abasement and the condescension of God who anticipates in love our every response."

"Dialogue is our method, not as a shrewd strategy but out of fidelity to the One who never wearies of visiting the marketplace, even at the eleventh hour, to propose his offer of love," said the pope.

This was Francis’ second public address Wednesday during his six-day visit to the U.S., having met President Barack Obama at the White House earlier in the morning.

Anticipation for each of the pontiff's meetings in Washington, New York, and Philadelphia has been extraordinarily high, with much focus placed on what the pope might say regarding a number of pressing issues.

With the bishops Wednesday, Francis did not refrain from speaking at length and in an in-depth manner. In a 42-minute address, the pope gave a wide overview of how he sees a bishop's role and spoke in poignant language about his own connection as a native Latin American to the U.S. experience.

The pope told the bishops he did not want to specifically direct them in what they should be doing, but wanted to offer "some reflections" for their work in different places around the country.

"It is not my intention to offer a plan or to devise a strategy," said Francis. "I have not come to judge you or to lecture you."

Instead, the pope said, he wanted "to speak to you as a brother among brothers."

Beginning to outline his reflections for the bishops, Francis said that as shepherds "our greatest joy is to be shepherds, and only shepherds -- pastors with undivided hearts and selfless devotion."

"It is not about preaching complicated doctrines, but joyfully proclaiming Christ who died and rose for our sake," Francis said. "The 'style' of our mission should make our hearers feel that the message we preach is meant 'for us.'"

Bishops, said the pope, should be "shepherds who do not pasture themselves but are able to step back, away from the center, to 'decrease,' in order to feed God’s family with Christ."

Such shepherds, he said, "also watch over ourselves, so as to flee the temptation of narcissism, which blinds the eyes of the shepherd, makes his voice unrecognizable and his actions fruitless."

While praising bishops who have the "shrewdness of an administrator," the pontiff also warned against being managerial or seeking power.

"We fall into hopeless decline whenever we confuse the power of strength with the strength of that powerlessness with which God has redeemed us," said Francis.

"Bishops need to be lucidly aware of the battle between light and darkness being fought in this world," he said. "Woe to us, however, if we make of the cross a banner of worldly struggles and fail to realize that the price of lasting victory is allowing ourselves to be wounded and consumed."

Then, outlining what appeared to be his key request for the U.S. bishops, Francis told them they must always seek dialogue.

"I cannot ever tire of encouraging you to dialogue fearlessly," Francis said.

Using a Greek word that roughly means to speak boldly and without fear, he continued: "The richer the heritage which you are called to share with parrhesia, the more eloquent should be the humility with which you should offer it."

"Do not be afraid to set out on that 'exodus' which is necessary for all authentic dialogue," urged the pope.

"Otherwise, we fail to understand the thinking of others, or to realize deep down that the brother or sister we wish to reach and redeem, with the power and the closeness of love, counts more than their positions, distant as they may be from what we hold as true and certain," he continued.

"Harsh and divisive language does not befit the tongue of a pastor, it has no place in his heart," said Francis. "Although it may momentarily seem to win the day, only the enduring allure of goodness and love remains truly convincing."

The pope also obliquely told the bishops not to fight amongst themselves.

"The great mission which the Lord gives us is one which we carry out in communion, collegially," said Francis. "The world is already so torn and divided, brokenness is now everywhere. Consequently, the Church, 'the seamless garment of the Lord' cannot allow herself to be rent, broken or fought over."

Amidst the difficulties of preaching to modern society, the pontiff urged the bishops "to recognize the Lord’s voice, as the apostles did on the shore of the lake of Tiberius."

"It becomes even more urgent to grow in the certainty that the embers of his presence, kindled in the fire of his passion, precede us and will never die out," said Francis. "Whenever this certainty weakens, we end up being caretakers of ash, and not guardians and dispensers of the true light and the warmth that causes our hearts to burn within us."

The pontiff also offered two direct recommendations for the bishops' work, saying he was making them "from my heart."

The first recommendation was for the bishops to be "pastors close people, pastors who are neighbors and servants."

"Let this closeness be expressed in a special way towards your priests," said Francis. "Support them, so that they can continue to serve Christ with an undivided heart, for this alone can bring fulfillment to ministers of Christ."

"I urge you, then, not to let them be content with half-measures," said the pope. "Find ways to encourage their spiritual growth, lest they yield to the temptation to become notaries and bureaucrats, but instead reflect the motherhood of the Church, which gives birth to and raises her sons and daughters."

"Be vigilant lest they tire of getting up to answer those who knock on their door by night, just when they feel entitled to rest," he continued. "Train them to be ready to stop, care for, soothe, lift up and assist those who, 'by chance' find themselves stripped of all they thought they had."

The second recommendation, Francis said, "has to do with immigrants."

"The Church in the United States knows like few others the hopes present in the hearts of these 'pilgrims,'" said the pope. "From the beginning you have learned their languages, promoted their cause, made their contributions your own, defended their rights, helped them to prosper, and kept alive the flame of their faith."

"Not only as the Bishop of Rome, but also as a pastor from the South, I feel the need to thank and encourage you," said Francis.

"Perhaps it will not be easy for you to look into their soul; perhaps you will be challenged by their diversity," he continued. "But know that they also possess resources meant to be shared. So do not be afraid to welcome them."

"Offer them the warmth of the love of Christ and you will unlock the mystery of their heart," he said. "I am certain that, as so often in the past, these people will enrich America and its Church."

Francis also obliquely referred to the sexual abuse crisis in his address, saying: "I realize how much the pain of recent years has weighed upon you."

"I have supported your generous commitment to bring healing to victims – in the knowledge that in healing we too are healed – and to work to ensure that such crimes will never be repeated," said the pope.

In the opening of his speech to the U.S. bishops, Francis gave them heartfelt encouragement for their ministry.

"Whenever a hand reaches out to do good or to show the love of Christ, to dry a tear or bring comfort to the lonely, to show the way to one who is lost or to console a broken heart, to help the fallen or to teach those thirsting for truth, to forgive or to offer a new start in God -- know that the Pope is at your side and supports you," he told the bishops.

"He puts his hand on your own, a hand wrinkled with age, but by God’s grace still able to support and encourage," said Francis.

The pope also said he felt like one of the bishops in the cathedral.

"I speak to you as the Bishop of Rome, called by God in old age, and from a land that is also American," said Francis.

"I must tell you that I do not feel a stranger in your midst," he said. "I am a native of a land that is also vast, with great open ranges, a land which, like your own, received the faith from itinerant missionaries."

"I too know how hard it is to sow the Gospel among people from different worlds, with hearts often hardened by the trials of a lengthy journey," he said.