Francis in Turin: Do not blame migrants for work troubles 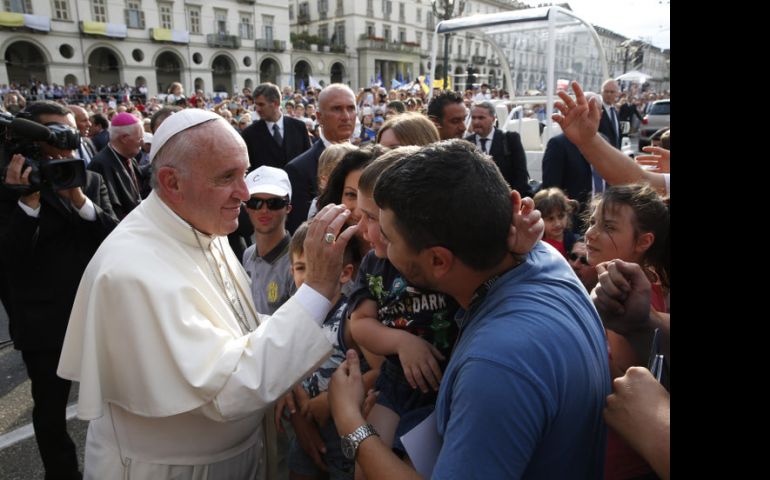 TURIN, ITALY — Returning to the land of his ancestors in northern Italy amid an economic downturn that has severely impacted people's lives, Pope Francis on Sunday exhorted laborers not to blame immigrants for their struggles.

Traveling some 450 miles north from Rome for a two-day visit to Turin, the historic once Italian capital and manufacturing center on the French and Swiss borders, the pontiff also cried out anew against the global economic system and what he called an "idolatry of money."

Meeting first during the visit with laborers and entrepreneurs of the city, which has been hit especially hard by the global economic downturn, Francis began by exhorting them not to mistreat immigrants or accuse them for loss of work opportunities.

"It makes you cry to see the spectacle in these days of human beings treated like merchandise," the pope forcefully added to his prepared remarks, speaking of the continuing crisis of migrants entering Italy from northern Africa and the Middle East.

"Immigration augments the competition, but the migrants are not complicit because they are victims of inequity -- of this throwaway economy and of wars," he cried to the crowd.

The pontiff then called on those present to "say no" to four things: the "throwaway" economy, idolatry of money, corruption, and "inequity that causes violence."

"In this situation, that is global and complex, we do not have to just wait for the 'upswing'" of the market, Francis said. "Work is fundamental ... and it is necessary that the whole society, all its components, collaborate so that there may be work worthy of men and women for all."

"This requires an economic model that is not organized for the purpose of capital and of production but rather for the common good," said the pope.

The pontiff's words Sunday morning on migrants were part of a visit that saw him also offer a message of encouragement in tough economic times and of embracing the role of both young and old in forging a path to the future.

Francis -- born in Argentina Jorge Mario Bergoglio to a father who was an immigrant from Piedmont and a mother whose parents were also such immigrants -- is visiting Turin Sunday and Monday in his first overnight stay in Italy outside Rome as pontiff.

Through Sunday, the pontiff's journey was marked by personal touches pointing to the feeling of many in the city that the pope was, in a sense, coming home. An editorial in the city's Catholic newspapers echoed a number of large signs displayed on churches the city, exclaiming: "Welcome back, Pope Francis!"

"We start this way our welcome to Jorge Mario Bergoglio, the Holy Father come from 'the end of the world' but from strong Piedmont roots," read the joint editorial from the Catholic papers "The Voice of the People" and "Our Time."

"[Francis] finds a city in transformation, a Church on the path, a reality that has need of words of hope and of courage to reemerge from an acute and prolonged economic crisis," it read.

The pope himself pointed to his roots during his homily at a Mass with thousands Sunday morning, reading from a poem written by the 19th century Piedmont descendant Giovanni Costa, said to have been taught to the future pontiff by his Italian grandmother.

Among those attending in the front row of the Mass were members of the extended Bergoglio family, who Francis is to spend Monday afternoon with privately.

The pope was responding in the meeting with laborers Sunday to three testimonies of local workers and entrepreneurs. Thanking them each for mentioning the role of family in their lives, the pontiff also asked those present not to forget the part of both children and grandparents in reinvigorating a society.

"Children are the promise of going ahead," said Francis. "The elderly are the richness of memory."

"A crisis cannot be overcome -- you cannot exit the crisis -- without the young people, children, and grandparents," he said. "Strength for the future but memory of the past that indicates where we are going."

Francis also spent time Sunday praying before the Shroud of Turin, the famous burial cloth that contains an image of what appears to be a crucified man that some believe was Jesus.

The pope sat in dark and silence before the shroud for about seven minutes, before walking forward to briefly touch it with his right hand.

The shroud, which some claim is a forgery, has been in special exhibition since April in celebration of the 200th anniversary of the birth of St. John Bosco, a 19th century Piedmont priest who founded the Salesians of Don Bosco and mostly worked with disadvantaged youth.

Francis mentioned the saint in his speech with the workers, saying his methods trying to educate youth showed the importance of preventive measures to prevent social conflicts.

The pope referred to his visit to the shroud during a noontime prayer in Turin Sunday, saying the image it contains can also represent "the face of every person who is suffering and unjustly persecuted."

Later Sunday, Francis will visit a historic church in Turin dedicated to the Virgin Mary. The church, known as the Santuario della Consolata, contains an icon of Mary that attracts thousands of pilgrims a year for its supposed healing power.

The Catholic community celebrates the anniversary of the first healing miracle every June 20 with a procession with the icon through Turin, stopping traffic with a long line of walking believers.

The pontiff will also meet Sunday afternoon with members of the Salesian communities and will later have encounters with both sick persons and young people.

Francis will make an ecumenical visit to Turin's Waldensian Temple Monday morning, becoming the first pontiff to visit a church of that Christian denomination. First founded in the 1170s, the Waldensians were long persecuted by the Catholic church before the reforms of the Second Vatican Council.

Speaking in his homily Sunday, Francis focused on explaining God's love towards humanity. God loves humans, the pope said, with a faithful love, a love that recreates all, and a love that is stable and secure.

"Jesus remains faithful, even when we make errors and waits for us to forgive us: He is the face of the merciful father," said the pontiff.

Every time we feel like we cannot go on, Francis said, Jesus "is next to us with the outstretched hand and the open heart."

"There is always the risk of forgetting that great love that the Lord has shown us," he said. "Even we Christians run the risk of becoming paralyzed by fear of the future and searching for security in things that pass, or in a model of closed society that tends to exclude more than include."

Proposing another way of life, Francis said: "We can live the joy of the Gospel by practicing mercy: we can share the difficulties of many people, of families, especially of the most fragile and marked by the economic crisis."

Vatican | Francis in Turin: Do not blame migrants for work troubles

It's not about women priests