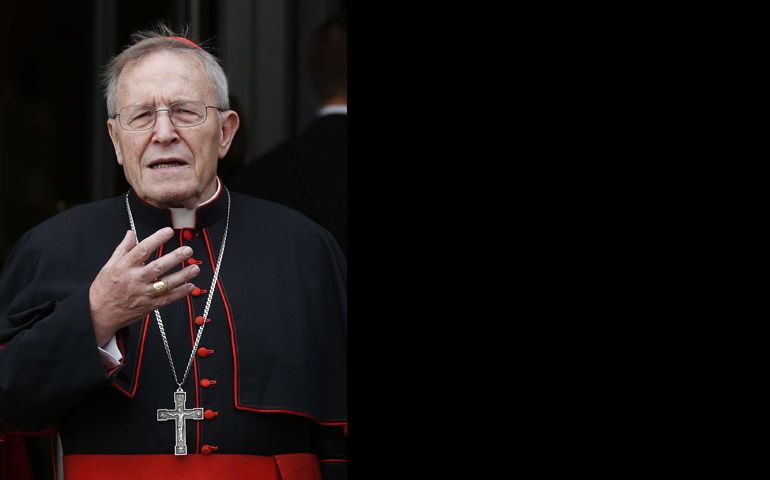 German Cardinal Walter Kasper gestures as he leaves a session of the Synod of Bishops on the family at the Vatican Oct. 6. (CNS/Paul Haring)
This article appears in the Family Synod 2015 feature series. View the full series.

Vatican City — The group of German speaking prelates at the ongoing Synod of Bishops -- which includes a rather diverse range of so-called progressive and conservative voices -- has presented a way that certain divorced and remarried Catholic persons might be allowed to take Communion in the church.

But while their arguments are being echoed by prelates of at least one other language group at the gathering, they have clearly not found support in others -- which have closed all openness to any possibility on the matter.

Catholics who remarry are currently prohibited from taking Communion unless they obtain annulments of their first marriages. The issue of the church’s practice in the matter has become one of the most discussed during the Oct. 4-25 Synod, called by Pope Francis to focus on family life issues.

Synod participants made their positions on the issue known Wednesday with release of the third and final reports from 13 different small discussion groups, separated by language preference, that have been helping guide the gathering’s discussions.

The German speaking group argues in their report that the church might be able to use what is called the “internal forum” to allow some remarried persons to take the Eucharist on a private, case-by-case basis after seeking guidance, advice, and then permission from priests or bishops.

The German-speakers' proposal could represent a breakthrough in synod discussions on the matter, should it find wider acceptance in the gathering's open sessions Thursday and Friday.

While the prelates have been known to be considering a so-called "penitential path" for the remarried to eventually receive Communion, the idea to use the internal forum provides a concrete method to possibly enact that path.

In Wednesday's reports, however, only one of the Italian speaking groups also recommends use of the internal forum and does not develop its arguments at length like the Germans do.

The German speakers' proposal comes from a group that includes an incredible range of intellectual backgrounds, some known in other times to have expressed stark differences of opinion.

Among those in the group are: German Cardinals Walter Kasper, who originally proposed the idea of the “penitential path;" and Gerhard Muller, the head of the Vatican’s Congregation for the Doctrine of the Faith, known previously to oppose that path.

German Cardinal Reinhard Marx said at a press briefing Wednesday that the German speakers were unanimous in making the proposal.

"Every text [released by] the German speaking group ... is unanimous, no vote against it," said Marx. "That's very important, I think."

"There must be perhaps a way of going with the people in these situations, with the priest to look if and when they can come to a full reconciliation with the church," said the cardinal, speaking of divorced and remarried persons. "That is the proposal.”

Catholic teaching says that acts of governance in the church can take place either in an internal or external forum. An internal forum would be a situation in which a decision is made in private without a formal decree or any sort of publicity.

Describing the process proposed by the German speakers in response to a question from NCR, Marx said his group considered the internal forum possibility after debating different arguments made by 13th-century theologian St. Thomas Aquinas.

The cardinal said the group had focused on arguments made by Aquinas that call for evaluating different situations to discern how to act in each situation. "What is the application to the special situation and to the special person in his situation?” Marx said they asked.

The cardinal said the proposed German process would involve a person, with guidance from a priest or bishop, looking back at the failure of the first marriage to see if they have made reconciliation with people they might have offended and are taking care of any responsibilities from that union.

"That is not a public process, but that is a spiritual way and then you can find a way if and when it might be possible to make a full reconciliation," said the cardinal.

The Italian speaking group that also mentioned use of the internal forum for divorced and remarried persons is being co-led by Cardinal Angelo Bagnasco and Bishop Franco Brambilla. Bagnasco, the archbishop of Genoa, is the president of the Italian bishops' conference. Brambilla, the bishop of Novara, is a respected theologian.

That group writes in its report that it agreed on four points about the church's ministry to the divorced and remarried, specifically calling for the removal of continuing forms of "liturgical, educational, and pastoral exclusion” for such persons.

Briefly mentioning a similar argument to the German-speaking group, they state that without changing church doctrine "we can discern in the internal forum, under the guidance of the bishop or designated priests, specific situations with common criteria according to the virtue of prudence, instructing Christian communities in welcoming."

Marx said Wednesday that one message he wanted the synod to send to families was that the church supports their hopes for lasting families, but will also stand with them should things go wrong.

"Most of the people agree with the center of the doctrine of the church, that one man and one woman will want to be together forever," said the cardinal. "They found a family and they want children."

"The church says be faithful to your dreams, it’s possible," he continued. “But they want to hear from us ... what will [happen] when we fail? Will you stay [with] us when we fail?"

“The message the church has to give is: Your dream is right, but when you fail we stay [with] you, we stay together, you belong to us," said Marx.

The German cardinal also strongly articulated a vision for the development of church teaching, saying the "doctrine of the church is not a closed shop, but a living tradition."

Giving as example differences between Pope Pius XI's 1930 encyclical Casti Connubii and Pope John Paul II's 1981 encyclical Familiaris Consortio, Marx said that between the two there "is a way; it's not the same."

"Between Vatican Council I and II is a way," said the cardinal. "It's not the same."

“We don’t change the truth, but we find the greater truth," said Marx. "The truth is owning us; we don’t own the truth. The truth is a person we meet. That’s the point.”

None of the four English-speaking groups at the synod mentioned the possibility of the use of the internal forum for divorced and remarried persons in their reports.

The group co-led by Australian Cardinal George Pell and U.S. Archbishop Joseph Kurtz wrote that a majority in that group "affirmed the current teaching and practice of the Church regarding the participation in the Eucharist of those who are divorced and civilly remarried."

"We acknowledged that this pathway may be difficult, and pastors should accompany them with understanding, always ready to extend God’s mercy to them anew when they stand in need of it," they stated.

The group co-led by British Cardinal Vincent Nichols and Irish Archbishop Diarmuid Martin proposed a four-step process of “reverential listening” to those who are divorced and remarried, aimed “to foster deeper discipleship with Christ based on the enduring bond of baptism, rather than addressing the question of admission to the sacraments of penance and Holy Communion.”

That group also requested that Francis establish a commission during the upcoming Jubilee Year of Mercy to study “the ways in which the disciplines of the Church which flow from the indissolubility of marriage apply to the situation of people in irregular unions."

The group co-led by Irish Archbishop Eamon Martin and Australian Archbishop Mark Coleridge almost flatly rejected proposals for a "penitential path" for remarried persons. There was "little enthusiasm" for that path, wrote the group, calling for "an affirmation of the Church’s current discipline."

The synod is meeting for two open sessions Thursday, where participants are expected to be presented with the first version of a possible final document from the meeting. They are then to debate that document, before providing amendments or changes in writing.

The gathering is to end Saturday with a final vote on the document, and possible remarks from Francis.