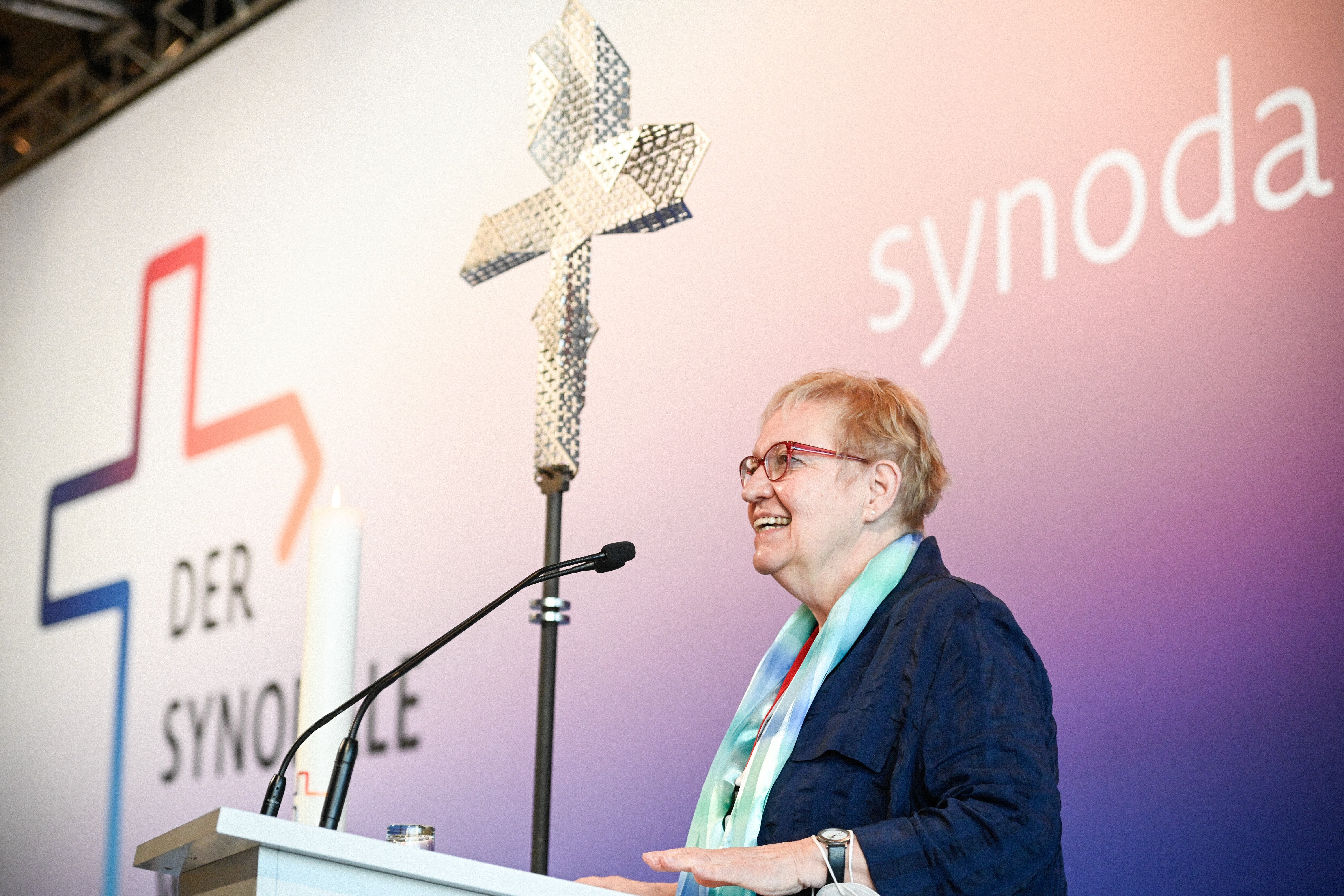 FRANKFURT, GERMANY — The Synodal Path of the Catholic Church in Germany wants laypeople to be able to participate in choosing bishops and wants the church to have women deacons.

The third Synodal Assembly to bring about reforms to the Catholic Church ended Feb. 5 with the first concrete decisions of the process. Most German bishops signaled they are prepared to support far-reaching change in the Catholic Church.

For three days, nearly 230 delegates — lay and clerical — discussed reforms based on texts that had been drawn up in four working forums and reflecting theological arguments they hope to present to Rome in 2023, at the end of the Synodal Path process.

But two years after the Synodal Path process started, the Vatican has yet to give a clear signal of support. Limburg Bishop Georg Bätzing, president of the German bishops' conference, announced that he met with Pope Francis in January and that he is in dialogue with Cardinal Mario Grech, secretary-general of the Synod of Bishops. Bishop Bätzing said a discussion group between the synod secretariat and the executive committee of the Synodal Path in Germany will be established.

The pope's representative to Germany, Archbishop Nikola Eterovic, greeted the assembly and reminded delegates Pope Francis "is the point of reference and the center of unity for more than 1.3 billion Catholics worldwide, 22.6 million of whom live in Germany." He said the pope often speaks of synodality, but warns against "parliamentarism, formalism, intellectualism and clericalism."

At the news conference after the assembly, when asked what support there is from Rome, Bishop Bätzing said, "Rome is not the world church." Bishop Bätzing made clear that he sees reforms being discussed in 2023 at Synod of Bishops on synodality, the consultation process for which has already begun.

Pope Francis has encouraged synodality, a process of discernment he describes as listening to the Holy Spirit through the word of God, prayer and adoration after listening to one another.

The German Catholic news agency KNA reported the condition of an episcopal two-thirds majority was included in the statutes of the Synodal Path at the insistence of the Vatican, to prevent things being decided there that could mean a break with church doctrine. As few as 23 episcopal "no" votes would be enough to prevent audacious demands, KNA reported. But conversely, the explicit approval of more than two-thirds of the bishops means a kind of stamp of approval that other magisterial bodies, including those in Rome, cannot simply overlook.

Among the demands made at the three-day meeting were a new moral teaching on sex, including a reassessment of homosexuality; the opening of the priesthood to women; a relaxation of the obligation of celibacy for priests; and a change in the approach to power.

The resolutions passed by the Synodal Assembly have varying prospects of taking effect, since many of the desired changes affect practices that are subject to universal church rules and cannot simply be handled differently in Germany.

The text, "Women in sacramental ministry," says: "In the Roman Catholic Church, a process will be initiated in a transparent manner, with a commission taking the lead, which will continue the Synodal Path in Germany in a sustainable manner. A commission will be established to deal exclusively with the issue of the sacramental ministry of people of all genders. Scientific excellence and spiritual concerns in the sense of the proclamation of the Christian Gospel are to be combined with each other."

That text will be returned to the forum on women before being presented to a future assembly for final adoption.

In 2016, Pope Francis reiterated St. John Paul II's 1994 ruling that women cannot be priests. However, Pope Francis has set up a Vatican commission to study the role of women deacons in early Christianity.

As far as election of a diocesan bishop, the assembly called for a lay decision-making body that, with the cathedral chapter in a diocese, will put forward the list of potential bishop candidates to the Vatican.

The first reading of texts included discussing the rights of LBGTQ Catholics, especially in light of church labor laws. The latter can be changed to bring them in line with German anti-discriminatory labor laws and does not need approval from the Vatican. Nearly 90% of delegates approved the text on "magisterial reassessment of homosexuality."

Gregor Podschun, chairman of the Federation of German Catholic Youth, the umbrella organization of 17 Catholic youth associations, told the assembly: "The church has caused great suffering to queer people. Now we are at a point of change, and we can change that. The church can again get close to people."

At a news conference after the assembly, Irme Stetter-Karp, president of the Central Committee of German Catholics and the lay co-president of the Synodal Path, spoke of women's rights in the church: "I have experienced years in which women have made church possible locally in the community but have not been valued by our church. I am no longer willing to tolerate that — the debate about access to all offices and ministries therefore touches me personally very much."

"Human rights in the church will only be a reality when there is justice for all genders, blessings for all, participation of all in decisions that concern all," she said. She added that the Synodal Path has put changes on the agenda that have been overdue for decades.

KNA reported that Bishop Peter Kohlgraf of Mainz said he saw high expectations that something had to happen quickly, adding: "I would be a little more cautious about that, because the involvement of the universal church is always important. A lot is already gained if the door is opened to a conversation with the universal church.

"It is perhaps a little too optimistic to expect the outcome to be the big breakthrough for the currently quite disastrous state of the church, but they are initial steps," he added.