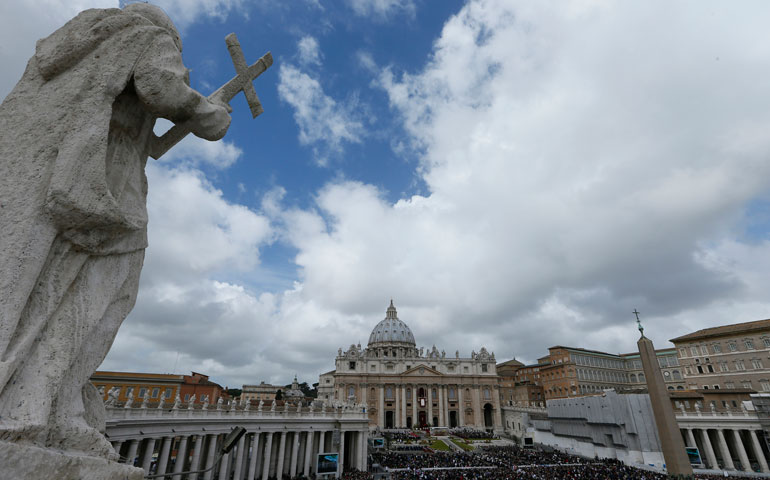 "Let's remember, he is the pope, after all, not the second coming of Christ." Heidi Schlumpf's caveat is well-taken, especially when it comes to questions of church governance. Media coverage leading up to the papal conclave consistently addressed three issues: curial reform, the Vatican bank, and the handling of sexual abuse allegations by bishops. Commentators were not concerned with the ethics of what were already acknowledged as moral failures in the church; it was the lapses of governance that allowed things to get so out of hand, becoming crises both for the faith of Catholics and the church's credibility. "Jesus with a MBA" became a catch phrase for the near-impossible challenges the new pope would face.

This already framed the question as a top-down issue, streaming responses within a narrow understanding of the church and obscuring the role of the people of the church in the process of governance.

The first gestures of Francis' pontificate triggered expectations of a movement away from an organizational structure that gives priests and bishops (and, even more so, cardinals and popes) superior ecclesiastical status and exclusive rights to the truth of Christ's Gospel, along with the power to enforce what they believe. The pope's style has moved discussion away from governance toward the kind of leadership he will provide. But church governance is more complex than style.

Most see governance as centralized in the Vatican and personified in the pope. This structure is often taken to be an unchangeable characteristic of the true church. Nevertheless, church life continues to center on communities loosely coupled and remotely connected with what happens in Rome. This necessitates framing the question of governance to include the decision-making processes in place in dioceses and parishes. It allows us to talk about the responsibility of bishops and pastors for what they do in governing the religious institutions that are part of the woof and warp of church life, without getting stuck in a debate about doctrinal and disciplinary oversight.

In either case, Catholics tend to know very little about the actual practice of church governance. There is no parliament where issues are debated, plans are proposed, and responses hammered out. Meetings of church and parish councils are rarely open to public scrutiny. Governance at the local level is seen more often as a mostly administrative exercise -- consolidate a couple of parishes, appoint new pastors, stick to the key messages and always be right.

Fifty years after the Second Vatican Council there remains a sharp distinction between clergy and laity within Roman Catholicism. Priests and bishops can override or ignore the aspirations and hopes of parishioners. The distribution of power and legitimating of authority remain beyond the reach of most Catholics, leaving an image of "a pyramid of power," in which church officials exercise sovereign control over the institution and its members.

Let me concede that the church is not a democracy, with the counter position that nothing prevents it from being a community of dialogue, mutual respect and shared decision-making.

If the church today lacks mechanisms for a healthy participation of the laity in the governance process, then how can Catholics make their voices heard? What avenues are open for the laity to learn about and respond to how the church is being governed? Who decides that the local church is being governed conscientiously, in a way that fosters faith in its people, corporate witness in the community, and transparency and openness? Is there a place for public opinion ("the voice of the faithful") in the governance of the church?

The freedom to express one's opinion, to form judgments that lead to shared convictions and united action is a hallmark of a healthy society and a condition for the common good. It affects judgments of fact as well as of value. Public opinion can polarize or unite a community; it can be manipulated, facilitated and misused. It can be subversive. It remains, however, a critical form of participation in the common life of a nation and even a church. It fosters action worthy of free, intelligent persons, who in religious discourse are made in "the image and likeness of God."

Beyond the number-crunching of polls, the responsible expression of opinion is a dynamic process of human movement toward informed judgment and action. A reflective and vocal process of "who we are" and "where we are going" is essential to participation in any human community. Active participation in the life of the church implies co-responsibility for the church.

Pope Pius XII (Christmas, 1942) stressed the need for free speech and the duty of public opinion to resist and overcome abuses of the then-reigning totalitarian regimes. In his Christmas 1944 message, he clearly linked freedom of speech to the legitimacy of governance. Asserting the collective and individual right "to express one's opinion" on what governments are saying and doing, he counseled "no obedience until one's voice has been heard." Elsewhere, Pius called on Catholic journalists to contribute to the development of public opinion in the church (1950). Because the church is also a human institution, he said, it requires the watchdog function of public opinion, without which the church suffers "a deficiency, a weakness, a sickness in its communal life."

He was not endorsing democracy in the church nor suggesting a new understanding of the papacy. But his words are a clear acknowledgement of the human element of governance, indirectly acknowledging the potential for abuse of power, misuse of office, and distance from its mission. And he was urging Catholics to find effective means of calling those who govern the church to account.

In a word, Catholics have no right to be indifferent to how the church is governed. The well-being of the church as a believing people requires that each contribute to the Christian identity and faithful commitment of all, toward a consciousness of who they are and how they are seen as church. It follows that a critical and at times suspicious attitude toward the words, decrees and actions of the Holy See, the local diocese and their pastors is something to be encouraged.

A process of Catholics talking to one another about the life of the church in a way that actually impacts on church governance requires a means to cultivate and sustain the formation of public opinion. The operative word is public. When people look at the Catholic church, they ought to be able to point out where this freedom of speech, fusion of viewpoints, and communicative action are occurring. But too often Catholics have to depend on the "secular" media to express their views or find out what is happening in the "upper echelons" of church governance.

It might be woefully idealistic to expect bishops and priests to learn how to foster public opinion in the church, much less how to act on it. The individual and collective experience of being Catholic is at best diverse, if not divisive. What are the issues of consequence to Catholics today, the committed, the indifferent and the nonbelieving ones? This is not about taking a poll on whether folks like the new pope. It is about taking people seriously. Catholics need to listen carefully and understand what each other is saying, to name what they are feeling, to act on what is happening, to get involved in the process of history -- their history, the history of their church. We are talking about a process of governance that recognizes that the church is its people and that that people wants and needs to be connected to God.

[Richard Shields is a retired Catholic school teacher, but continues as a lecturer in pastoral theology at the University of St. Michael's College in Toronto.]

A version of this story appeared in the May 10-23, 2013 print issue under the headline: Governance involves Catholics learning to speak and listen.