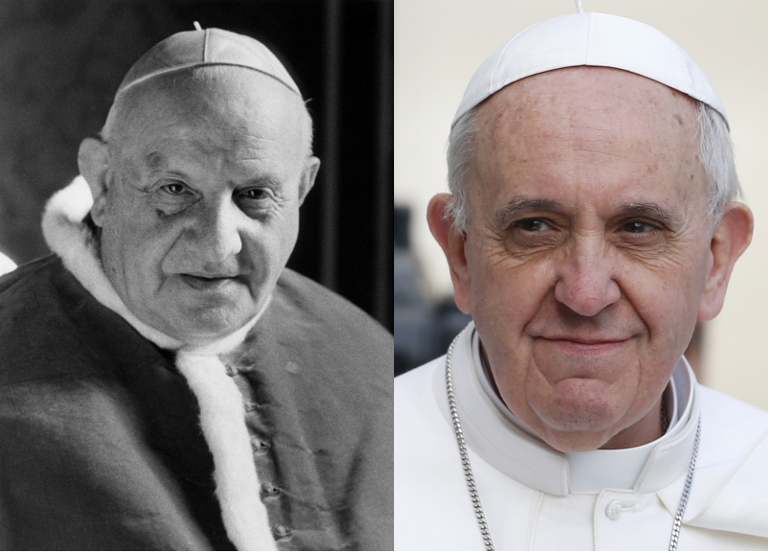 Images from the first three weeks of Pope Francis’ pontificate have been largely positive, if not downright jovial: The new pontiff wearing simple vestments, kissing babies, and embracing adorers in full-on, two-armed hugs.

With such effusive imagery, comparisons to other genial and jovial popes are already abounding. The one comparison being talked about in somewhat hushed tones, as if not to curse the moment?

Francis’ possible similarities with Pope John XXIII, the pope of the late 1950s and early 1960s and a beloved figure among some U.S. Catholics for his decision to open a 1962-65 worldwide meeting of bishops to consider nearly all aspects of the faith.

“This is like being back in the ’60s and John XXIII,” Sr. Janice Farnham, a member of the Religious of Jesus and Mary and a retired professor of church history at the Boston College School of Theology and Ministry, told NCR Monday.

“For some of us, we never thought we were going to get back here again. It’s quite fascinating and attractive.”

Jesuit Fr. John O’Malley, a prominent U.S. church historian who has written extensively on that meeting of bishops, known as the Second Vatican Council, likewise said Francis’ actions so far are “projecting precisely” the image of the church imagined by the council..

Bending to his knees as he washed the feet of twelve young adults — including two women and two Muslims — one-by-one March 28 at Rome’s Casal del Marmo prison, the pope also kissed their feet and told the youth he was at their service as their priest and bishop.

“This is a symbol, it is a sign — washing your feet means I am at your service,” the pope told the youth during a brief, off the cuff homily.

“Help one another,” Francis continued. “This is what Jesus teaches us. This is what I do. And I do it with my heart. I do this with my heart because it is my duty; as a priest and bishop I must be at your service.”

“The council was about reconciliation — with non-Western cultures, with ‘the modern world,’ with non-Catholic Christians, and with the non-Christian Other,” said O’Malley, a professor of theology at Georgetown University and author of What Happened at Vatican II.

“Washing the feet of the two Muslims was a gesture of love, as he himself told them, but also a gesture of reconciliation,” wrote O’Malley in an email.

“In that regard, I think of Pope John XXIII's hope for Vatican II that he expressed in his allocution to the council on its opening day, Oct. 11, 1962.  He wanted the council to show that the church was ‘the loving mother of all, benign, patient, full of goodness and mercy toward the children separated from her,’” O’Malley continued.

“It seems to me that through word and gesture Pope Francis is projecting precisely that image of the church.”

Yet, despite the obviously positive optics from the first few days of Francis’ papacy, each of three church historians who spoke to NCR about the new pontiff’s impact said what we see so far are words, style, and symbols.

The question remaining, they said, is just what changes the pontiff will make on issues of substance — like in the appointment of bishops, or his handling of the Vatican bureaucracy.

“One of my thoughts as a historian is that this is all lovely, but it’s all about style,” said Farnham,

“When substance begins — and there will be substance, for sure — then we’ll see where all these people who are so enamored of the style, including me, will be.”

As focus on Francis shifts from his style to how he handles issues of substance, another church historian said he was waiting to see especially how the new pope makes decisions.

“We had two top-down papacies in terms of decision making,” said Christopher Bellitto, a widely cited church historian and the chair of the history department at Kean University, Union, N.J., referring to the styles of Popes John Paul II and Benedict XVI.

One question, said Bellitto, is whether Francis will allow more decision making in the church to come from a more local level, perhaps from national bishops’ conferences.

With the 50th anniversary of the closing of the Second Vatican Council in 2015, Bellitto said he hopes Francis will “call for a worldwide discussion on how we’re doing in implementing Vatican II, but allow that discussion to take place beginning at the lowest level…and then bubble up, so that the ideas flow from the periphery to the center.”

Noting that both Pope Francis’ namesake, St. Francis of Assisi, and the head of his Jesuit religious order, St. Ignatius of Loyola, were seen in their time as outside the mainstream, Bellitto said “if reform is going to take place, the best ideas bubble from the periphery and come to the center.”

“When Francis of Assisi showed up, he was on the periphery,” Bellitto said. “They thought he was some crazy itinerant preacher. Ignatius is investigated by the Inquisition. Those are perfect examples of reform coming from outside, from the periphery to the center.”

Farnham said that no matter what directions Francis chooses to take on issues of substance, he may be looking to move quickly. Noting that Bergoglio was elected pope at age 76 and John XXIII at age 77, Farnham said “I’m sure [Francis] knows he is not going to be around for long.”

“And so what he will do, he will have to do quickly,” she continued.