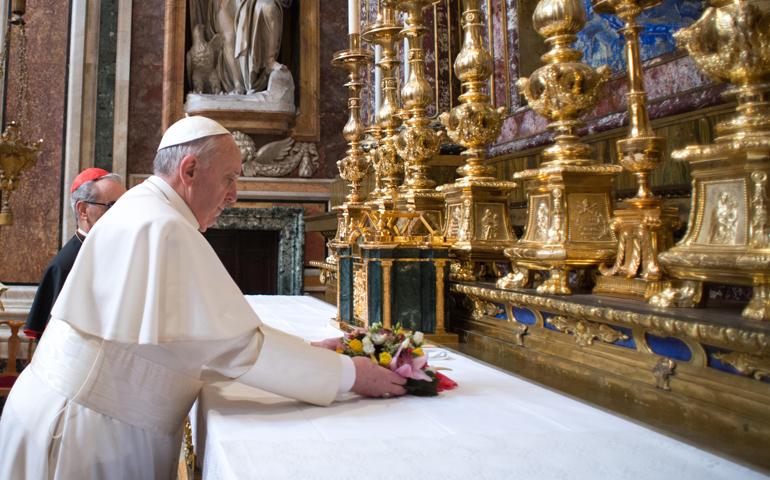 Newly elected Pope Francis leaves flowers in front of the "Salus Populi Romani" ("Salvation of the Roman People"), a Marian icon, in a chapel of the Basilica of St. Mary Major on Thursday in Rome. (CNS/L'Osservatore Romano)

Since his election Wednesday, Pope Francis has been busy, and he has used his activity to reinforce and further the image of a warm, simple pastor he displayed from the balcony of St. Peter's Basilica when he was announced pope.

The stories of Argentine Cardinal Jorge Mario Bergoglio moving out of the archbishop's palace in Buenos Aires, using public transportation and criticizing clericalism have been told repeatedly in various media since he became Pope Francis.

But he displayed the same humility and simplicity in his first 24 hours of being pope, according to the Vatican spokesman and cardinals who sat in the conclave with the man who would be the 266th successor of St. Peter.

After his election in the Sistine Chapel, the new pope chose not to sit on the papal throne when he received the oath of obedience and homage from the cardinals. Instead, he stood and received the cardinals one by one, according to Jesuit Fr. Federico Lombardi, director of the Vatican Press Office.

As the new pope prepared to be introduced to the 100,000 people waiting for him in St. Peter's Square and the millions watching the live television broadcast, Francis opted to wear only the white papal zucchetto and cassock.

"The new pope wore neither the red mozzetta (the elbow-length cape worn by high-ranking prelates) nor a stole, and his pectoral cross was the same simple one that he has worn as bishop" and archbishop of Buenos Aires, Lombardi said during a press briefing in the temporary media center set up in Pope Paul VI Hall.

Following his appearance, Pope Francis declined to use a special car prepared for him, but chose to take the minibus back to Casa Santa Marta, the residence the cardinals use during the conclave.

"He said, 'No, I am going in the bus because I came here on the bus with all of you. I will go back on the bus,' " Lombardi said.

Later, at supper at Casa Santa Marta, Francis responded to a toast from the cardinals by saying, "May God forgive you for what you have done," Lombardi said.

On Thursday morning, Francis made a visit to the St. Mary Major basilica, the oldest church dedicated to Mary, mother of Jesus, in Roman Catholicism. He prayed before an icon of Mary and the child Jesus, the "Salus Populi Romani" (Protectress of the Roman People), and left a bouquet of flowers.

Exiting the basilica, he spent some time visiting with children in a nearby schoolyard. He traveled to the basilica in a common Vatican service car, declining again to use the papal limousine, Lombardi said at the press briefing. He was also accompanied by a small security detail and not a police escort.

On their way back to the Vatican, Pope Francis asked his driver to stop by the Paul VI International House, a residence for foreign clergy visiting Rome, where he stayed before entering the conclave. The pope greeted the staff of the residence and thanked them for their work. He gathered up his luggage then paid the bill for the room he had been occupying for the past few weeks.

"He said that he was concerned about giving a good example of what priests and bishops should do," Lombardi said.

Francis celebrated Mass with the cardinals who had been in the conclave with him at 5 p.m. Rome time Thursday. The Mass was only for Francis and the cardinals, but like much of the ceremonies for this conclave, it was broadcast live on Vatican TV and made available to international outlets.

His homily at the Mass was a meditation on the cross.

"The only true glory is in the crucified Lord," he said, according to the official translation of his homily, which was given in Italian. "We can build many things, but if we do not witness to Jesus Christ, then it doesn't matter. We might become a philanthropic NGO, but we wouldn't be the church, the Bride of the Lord."

The pope's schedule for the next week:

Francis might also move into the papal apartment Wednesday.

At the press briefing Thursday, Lombardi confirmed a report that at the age of 21, Francis had a pulmonary illness and part of one lung was removed. He added that "this has never been an obstacle, either in his rhythm or for his work, his life or his pastoral care, as demonstrated by leading a diocese that requires such dedication as that of Buenos Aires," Lombardi said.