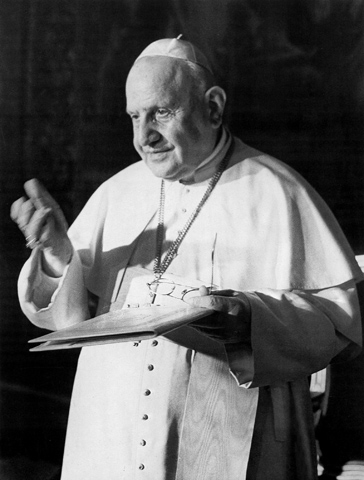 Pope John XXIII: He was a bighearted man and a man of God, who had gained the confidence and affection of people everywhere. (CNS)

Angelo Roncalli was really a very common fellow. His personal gifts and weaknesses were ones that you or I might possess. He did well in school but he was no star. He did not own big homes or have a stunning physique. He was not one of the world's great musicians; he was not a leading theologian in his day; and he always struggled to keep his weight under control. His worldview resulted from being raised by a large Catholic farm family, hardworking but quite average. He sounds like any one of us, doesn't he? And yet, he will be a saint. What does this mean in his life and in ours?

In 1907, he gave a lecture at the seminary in his home diocese of Bergamo in northern Italy. In it, he gave a prophetic description of what it means to be a saint. We tend, he said in that speech, to make saints larger than life, more like figures in a movie or novel than like your neighbors down the street. Saintliness actually results, he said, from learning the art of self-giving love. It flows from dying to self, from laughing at one's own foibles and humbly enduring the foibles of others. Saints aren't so much superstars of holiness as humble sinners, ready to allow God to love them just as they are.

Such dying to self, such trust in a loving God and such laughing along with life are what has made this ordinary person into a saint. We can do the same thing ourselves.

Pope John XXIII is, therefore, really quite an accidental saint. His journals reveal a man who admired the saints greatly but also one who would be surprised to learn that this honor has been given to him. We learn in his journals that he never felt he was quite holy enough; he felt that he wasn't quite living up to his faith. In his journals, we meet a man of great humility, delighted at how well people liked him and surprised that he'd been chosen for the papacy.

When he handed these handwritten journals and crumpled notebooks to his faithful secretary, Msgr. Loris Capovilla, Pope John confided to him: "My soul is in these pages. I was a good, innocent boy, a little timid. I wanted to love God at all costs and I thought of nothing other than becoming a priest at the service of simple souls in need of patient and diligent care."

His humility allowed him to accept God nudging him in his life. Allowing himself to be divinely nudged is also a major element of his saintliness. The idea of calling the Second Vatican Council, for example, came to him, he said, "like a flash of heavenly light." The idea emerged in prayer and he trusted it.

He felt God was nudging him to lead the church to greater overall unity, and with that in mind, he invited the leaders of the Anglican, Protestant and Orthodox churches. They came because they sensed the love with which they had been invited. Among the most moving of his early meetings with non-Catholics was when he welcomed a group of Jews with open arms, saying to them, "I am Joseph, your brother."

(Regrettably, and a sign of those times, there were no "sisters" among these invited guests, and it would take additional nudging from the Holy Spirit until Catholic women were finally invited to the council in September 1964.)

Vatican II was for him a response to God nudging him to reform and update the church, and to draw all Christians into greater unity for the sake of humankind and world peace. Like the apostles on the eve of Pentecost, he anticipated that something grand was about to unfold. Little did he know that the Holy Spirit would sweep into the church with such force.

Vatican II, under his leading hand, was a gathering in St. Peter's Basilica of the world's Catholic bishops, but it was also a gathering that every day of the council brought tens of thousands of men and women religious, laypeople and other visitors into St. Peter's piazza outside that basilica. The bishops did not act alone; they, too, were nudged by the Spirit working through both John and those crowds.

At the center of it all, with peace and tranquility, stood the amiable and humble John. He was a bighearted man and a man of God, who had gained the confidence and affection of people everywhere. And why? Because when people encountered him, they encountered his loving heart. His eyes twinkled with happiness, his focus never left his visitor, and his lips offered only affirmation and affection.

He once told a visiting bishop that his arms were open, as Christ's had been on the cross, to embrace everyone -- everyone -- with love. If you were an underpaid Vatican employee, the pope himself took your part. If you were outside the church, he reminded you how much the church loved you. If you were a nonbeliever, he offered you his friendship.

Such was John XXIII. He was one who sought what unites us and not what divides us. He believed that this would lead to peace. He was a priest, yes, but first he was a fellow human being, himself on the journey of faith.

He was able to speak a word of comfort to everyone without a hint of self-consciousness. On the feast of Christmas one year at St Peter's, he told the world that his heart was "full of tenderness" in giving us his Christmas wishes. I would like, he said, to be able "to linger at the tables of the poor, in workshops, in places of study and of science, close to the beds of the sick and the elderly, in all places where [people] pray and suffer, work for their needs and for others."

I would like, he went on, to place my hands on the heads of little children, to look into the eyes of young people, to encourage mothers and fathers in their daily duties. To everyone, I would like to repeat the message of the angel: "Behold, I bring you tidings of great joy: a savior is born to you."

With these simple words, he catechized the world about the feast of Christmas. He made it possible to believe that Christ loves us and that we are called to love him and to love each other. John broke through the chatter of the world and people heard in his message a call addressed to their better selves.

I understand that it requires several proven miracles in order for someone to be canonized a saint. Just consider the influence of St. John XXIII and Vatican II on the world and the church today: hundreds of thousands of lay ministers all around the world; people actually praying the Mass rather than merely attending it; work for justice on a par with teaching about religion; human dignity at the center of the church's witness; warm relationships between Christians and Jews; harmony and dialogue among the Christian denominations; and a new vigor in the Christian faith as we now embrace the leadership of Pope Francis. Miracles, indeed!

His death in 1963 had a strong impact on people everywhere, believers and nonbelievers alike. Throughout the world, everyone mourned. Patriarch Alexis of the Russian Orthodox church called his people to prayer. The rabbi of the Sephardic synagogue in Paris introduced a prayer for John's intention in the office of the Sabbath. The prisoners at Rome's Regina Coeli prison, where he had visited on his first Christmas in the Vatican, sent John this message: "With an immense love, we are close to you."

Perhaps that says it all.

[Bill Huebsch is the author of The Spiritual Wisdom of Saint John XXIII.]

A version of this story appeared in the April 25-May 8, 2014 print issue under the headline: John XXIII: The accidental saint.